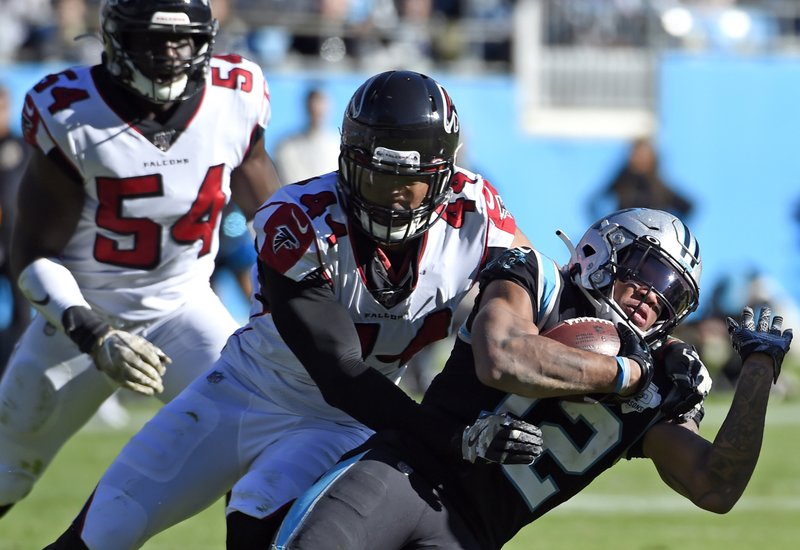 Atlanta Falcons defensive end Vic Beasley (44) tackles Carolina Panthers wide receiver D.J. Moore (12) during the first half of an NFL football game in Charlotte, N.C. The division that led the AFC in sacks in 2019 might be even tougher to block next season. Every team in the AFC South made at least one major move along the defensive front between free agency and the draft. Tennessee signed 2016 NFL sack leader Beasley in free agency. (Photo: AP)

The division that led the AFC in sacks in 2019 might be even tougher to block next season.

Every team from the South made at least one major move along the defensive front between free agency and the draft.

Tennessee signed Vic Beasley in free agency, hoping the former Atlanta outside linebacker will look more like the guy who led the NFL with 15 1/2 sacks in 2016 than the one who got a combined 18 in the three seasons since. The Titans’ lack of speed on the edge was evident in the AFC championship game loss to Kansas City.

The Titans also expect to have linebacker and 2019 fifth-round pick D’Andre Walker, who missed his rookie season because of injury, and have expressed interest in free agent Jadeveon Clowney, whose asking price appears to be on the decline.

Indianapolis traded its first-round draft pick, No. 13 overall, to San Francisco for 2018 Pro Bowl defensive tackle DeForest Buckner. The Colts then signed the 6-foot-7, 295-pound Buckner to a four-year contract worth $84 million. He made 28 1/2 sacks in four seasons.

Jacksonville used its second of two first-round picks to land LSU pass rusher K’Lavon Chaisson to pair with Josh Allen, a Pro Bowler as a rookie. Chaisson is a key component of the team’s defensive redo that included the losses of Calais Campbell and Marcell Dareus. The Jaguars also could potentially part ways with disgruntled defensive end Yannick Ngakoue.

“When we drafted K’Lavon, I made a comment to a friend of mine and I’m like, ‘I sleep much better at night knowing that we have some pass-rush studs,’” Jaguars general manager Dave Caldwell said.

Here are some other things to know about the AFC South, which has sent two teams to the playoffs in two of the last three years:

Three of the four division teams will have different quarterbacks from their 2019 season openers.

The Colts signed 38-year-old Philip Rivers to a one-year, $25 million contract. He joins a team that has lacked a top-level QB since the unexpected retirement of Andrew Luck.

The Titans are sticking with Ryan Tannehill, who replaced Marcus Mariota last October. Tannehill signed a four-year deal worth up to $118 million and includes $62 million fully guaranteed.

The Jaguars are rolling with Gardner Minshew, who went 6-6 in 12 starts as a rookie after replacing injured Nick Foles in the opener. Jacksonville dumped Foles a year after guaranteeing him $50.125 million, then passed on a quarterback early in the draft.

It was the second straight year the Jags botched their quarterback situation. They cut Blake Bortles days after signing Foles and took on $15.5 million in dead money in 2019. They have another $18.75 million on the books in 2020 because they traded Foles.

The Titans unloaded Casey and his $11.25 million salary to Denver for a seventh-round pick (Tulane cornerback Thakarius Keyes). Tennessee is counting on 2019 first-round pick Jeffery Simmons to fill the void of losing Casey.

The Jaguars dumped Ramsey last October and traded Campbell to Baltimore in March for a fifth-round pick (Auburn safety Daniel Thomas). Jacksonville drafted Florida cornerback CJ Henderson and Chaisson in the first round to help fill the holes.

Hopkins, Casey, Ramsey and Campbell made a combined 14 Pro Bowls as part of the AFC South, all since 2015.

There’s little doubt that Tennessee is the team to beat in the AFC South, especially amid the offseason changes caused by the coronavirus pandemic. The Titans return much of their roster as well as offensive coordinator Arthur Smith. Coach Mike Vrabel is taking on a bigger role with the defense following Dean Pees’ retirement.

Houston has two new coordinators, both promoted from within, so also could face few hurdles. Indianapolis made no coordinator changes but is counting on a smooth transition for Rivers as he reunites with coach Frank Reich and play caller Nick Sirianni.

Jacksonville is dealing with the most adjustments. Coach Doug Marrone hired Jay Gruden as offensive coordinator and is switching to a 3-4 defensive scheme under Todd Wash.