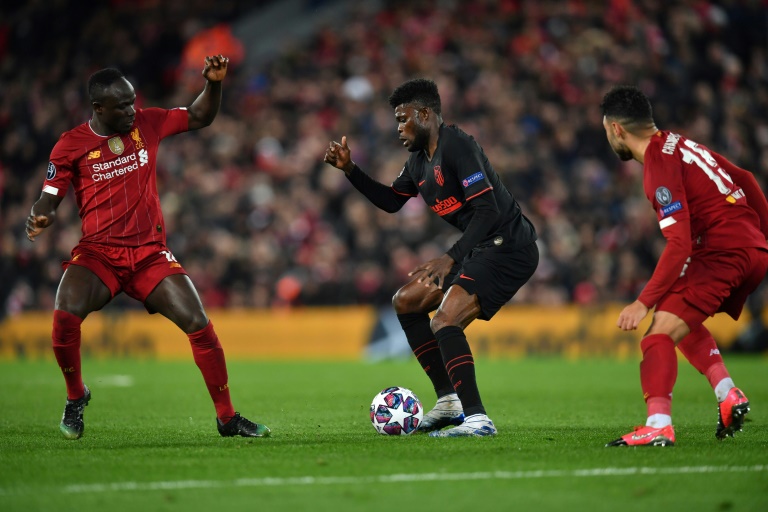 Senegalese Sadio Mane (L) of Liverpool and Ghanaian Thomas Partey (C) of Atletico Madrid are among the stars set to light up the 2021 Africa Cup of Nations in Cameroon. (Photo: AFP)

The May semi-finals and finals of the two annual African club competitions are likely to fall victim to the coronavirus pandemic sweeping the continent.

After two-leg semi-finals in the competitions between May 1 and 10, the Champions League final is set for May 29 in Douala, five days after Rabat hosts the Confederation Cup title decider.

But the postponement of both competitions seems inevitable as the full impact of the COVID-19 disease has still to be felt in the continent with the most fragile public health systems.

Already, two rounds of 2021 Africa Cup of Nations qualifiers and the African Nations Championship in Cameroon have been postponed due to the killer COVID-19 disease.

-- Home and away preliminary round ties last September reduced the number of contenders from 54 to 40 for five places at the 2022 World Cup in Qatar.

Next comes 10 six-matchday groups between October 5, 2020, and October 12, 2021, with the table-toppers paired in five two-leg showdowns to decide who represents Africa.

Group dates this October and November may have to accommodate delayed 2021 Cup of Nations qualifiers instead, but there are sufficient international windows next year to catch up.

-- Qualifiers for the 24-nation tournament in Cameroon from January 9 to February 6, 2021, have fallen two rounds behind after fixtures scheduled for this month were canceled.

It is hard to imagine the single round set for June 1-9 taking place and there must also be doubts about matches planned for August 31-September 8.

CAF will hope they can stage double matchdays between October 5-13 and November 9-17 -- dates currently allocated to World Cup group games -- and complete qualifying.

-- The April 4-25 tournament in Cameroon, which is restricted to footballers playing in their country of birth, has been postponed due to the coronavirus.

With no foreign-based stars involved, the tournament does not have to fit into a FIFA international window, creating flexibility when it comes to finding new dates.

Apart from the football, the Nations Championship offers Cameroon an opportunity to test whether they are ready for a much more demanding task -- staging the 2021 Cup of Nations.

-- The semi-finals pit Casablanca clubs Raja and Wydad against Cairo outfits Zamalek and Al Ahly respectively, raising the possibility of the first final between clubs from the same country.

While a May 29 conclusion seems unlikely, the matches can be staged until September 6, with the last-32 first legs of the 2020/2021 season scheduled to kick off five days later.

The competition could also be shortened by turning the semi-finals into single matches in Douala, the Cameroon port city chosen to host the final.

-- The semi-finals in the African equivalent of the UEFA Europa League will see Pyramids of Egypt meet Horoya of Guinea and Renaissance Berkane face fellow Moroccans Hassania Agadir.

Like the Champions League, the semi-finals are due to be home-and-away affairs, followed by a single-match final in Rabat, giving Berkane or Agadir a distinct advantage.

CAF will likely seek new dates, and possibly reduce the semi-finals to single matches, between June and September 6, five days before the 2000/2021 season gets into full swing.