SPORTS Age concern: Six stars for whom Olympics in 2021 may come too late

Age concern: Six stars for whom Olympics in 2021 may come too late 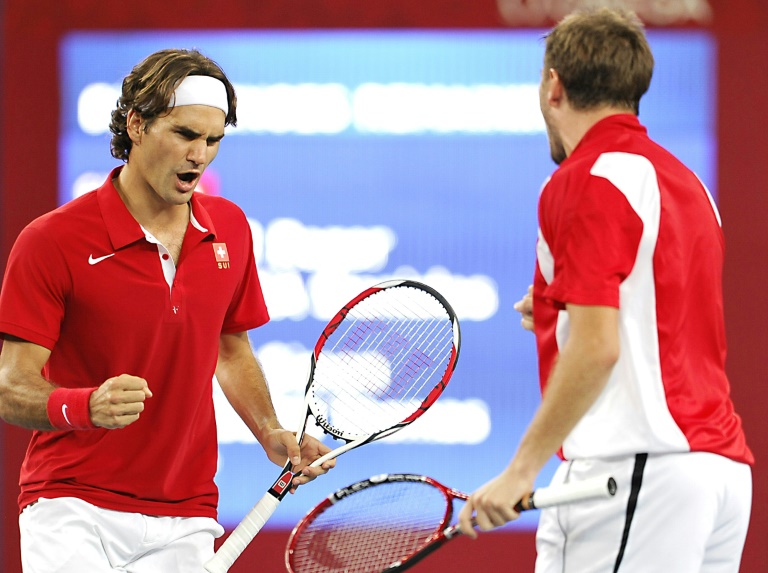 Way back when: Roger Federer and Stan Wawrinka celebrate after winning Olympic gold in the men's doubles in 2008 at Beijing. (Photo: AFP)

With the 2020 Olympics postponed until 2021, there are fears the delay will shatter the gold medal hopes of many ageing athletes.

AFP Sport looks at six evergreen stars for whom a delayed Tokyo Games might be a step too far.

The 20-time Grand Slam champion, who will be 40 in August 2021, won Olympic gold when he partnered Stan Wawrinka to the men's doubles title at the 2008 Beijing Games. Federer was a quarter-finalist in singles in China, silver medallist in 2012 in London before injury forced him skip the 2016 Games in Rio.

In Sydney, in 2000, Federer made the semi-finals in singles but he still remembers Australia fondly as it was the place where he first started his romance with Mirka Vavrinec, who is now his wife.

"Overall it was probably the most unbelievable Olympics I ever had," said Federer, who was also Switzerland's flag-bearer in Beijing and in Athens in 2004 where he exited in the second round.

The US great will be 40 in September next year although her desire to play in Tokyo might not be as pressing as that of Federer.

Williams already has four Olympic gold medals -- singles at London in 2012 and women's doubles with sister Venus in 2000, 2008 in Beijing and London four years later.

The sisters lost their opening round match in Rio in 2016 while Serena's gold medal defence in the singles was ended by Elina Svitolina in the third round.

Woods, who will be 46 in December next year, would have struggled to make the US team for the Games if they had remained in their 2020 slot. He is currently only the sixth-ranked American with just the top four guaranteed to make the squad.

Woods, the winner of 15 majors, has been fighting a recurrence of a back injury so at least the delay to 2021 for the Olympics gives him renewed hope of a golden swansong.

Organisers would be desperate for Woods to play after he missed the return of golf at the 2016 Games in Rio due to injury.

The colourful and controversial Chinese badminton superstar will be 37 by the time the next Games roll around.

Lin already has gold from Beijing in 2008 and London four years later, adding to his five world titles.

However, there is a hint of unfinished business for Lin who was defeated in the bronze medal match in Rio in 2016 having been downed in the semi-finals by great rival Lee Chong Wei, the man he had beaten in the 2008 and 2012 Olympic finals.

The only female track and field athlete in history to win six Olympic gold medals, Felix had spent the last two years preparing for a golden farewell at the Tokyo Olympics.

Felix, who turns 35 at the end of this year, will be racing against Father Time as she attempts to improve her medal tally in what will be her fifth consecutive Olympics appearance.

The American star can take comfort from the fact she is by no means the oldest woman to chase Olympic glory in sprint events. Merlene Ottey was 40 when she anchored Jamaica's 4x100m relay team to a bronze medal in 2000.

Gatlin had planned to retire in 2020 after competing in his fourth Olympics at the age of 38. However the controversial American star now plans to extend his career in order to compete in the rescheduled Tokyo Games.

"I think a lot of people think that time is against me or against older athletes in this situation, and it's far from the truth," said Gatlin, who has twice served suspensions for drug offences during his career.

Gatlin, the 2004 Olympic champion, though could face a battle to even qualify given the depth of the US men's sprinting squad, with Christian Coleman and Noah Lyles the favourites in the 100m and 200m.

But plenty of time for this pair

She would not have been alone in Japan as professional skateboarder Sky Brown — only five months older — was hoping to compete for Great Britain.