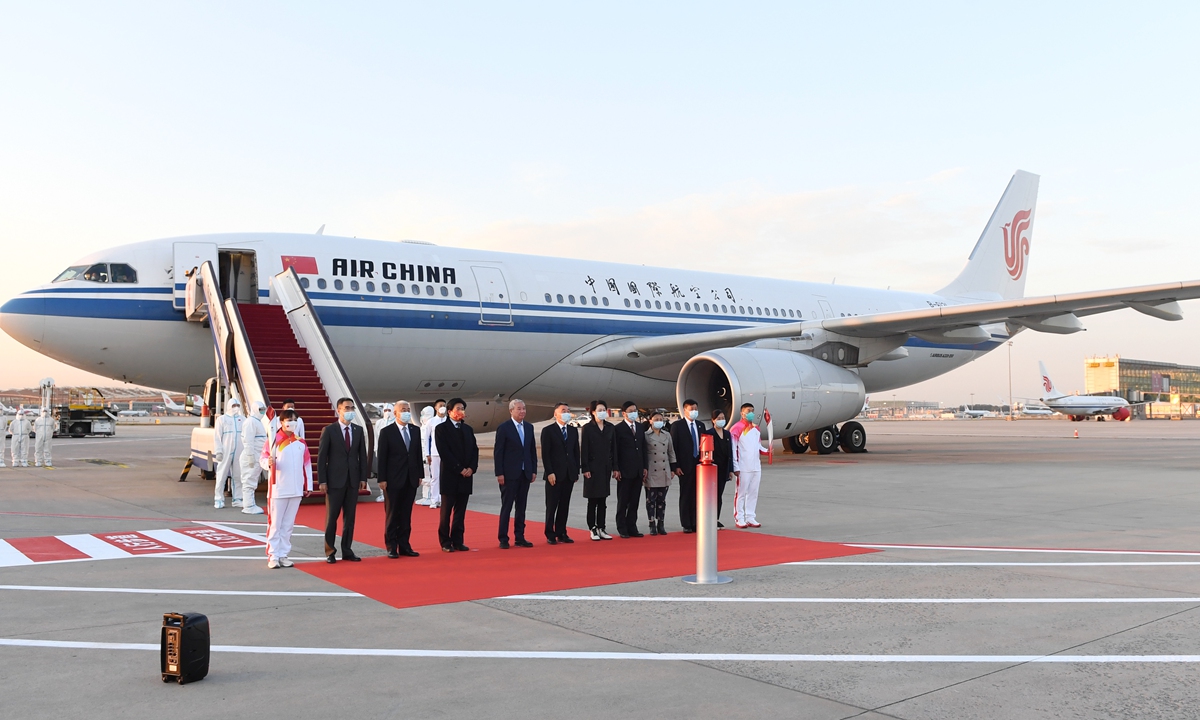 As the 100-day countdown for the Beijing 2022 Olympic Winter Games kicked off on Wednesday, logistics and transport arrangements for athletes and referees to China has become a hot topic among airlines.

As airlines are finalizing plans to transport participants, guaranteeing the safety of participants has become a critical task for both organizers and carriers, amid the global COVID-19 pandemic.

US-based Delta Air Lines recently told the Global Times that it plans to arrange charter flights to transport athletes, referees and journalists from the US to China for the Olympics, with the first group expected arrive in January.

The airline is still discussing specifics with officials at relevant government departments, according to Wong Hong, Delta Airlines' president for China.

Air China, as an official partner airline of the Beijing 2022 Olympics and Paralympic Winter Games, just completed the transport of the Olympic flame from Greece to Beijing.

Air China was responsible for transporting the Chinese delegation to the Tokyo 2020 Olympic and Paralympic Games.

Although the Civil Aviation Administration of China (CAAC), the civil aviation regulator, has yet to release a detailed plan for Olympic transport arrangements, a source close to the matter told the Global Times on Wednesday that some departments under the CAAC had made initial contact with several overseas carriers, and the transport will mainly rely on charter and temporary flights, with the entire operation subject to "closed loop" management.

The CAAC has led the way in making sure Beijing is ready of the global event. As early as in April of 2019, the CAAC set up a transport guarantee team for the major event. On July 20, the CAAC held a meeting and vowed that the civil aviation would build a strong security barrier to prevent the spread of the COVID-19 during the event.

Capital Airport Holding said in a note sent to the Global Times on Wednesday that it will strictly implement pandemic prevention and control requirements in coordination with event organizers. International inbound passengers will exit the capital airport through the T3-D handling area, which is also under closed-loop management.

International outbound passengers will pass through the T3-C and T3-E international departure protection zones in line with closed-loop management protocols.

An often-cited health management principle in China to stem the spread of the COVID-19, "closed loop" means venues are closed off from the general public, with sites and locations within the loop connected only by designated vehicles. All participants within the loop will have all essential needs taken care of, said Wang Quanyi, an official from the health and services department of the Beijing 2022 organizing committee on Monday.

Reuters reported on Tuesday that domestic and foreign airlines will be encouraged to operate temporary flights available only to participants, citing organizers.

The first edition of the official guidebook detailing pandemic prevention for the 2022 Beijing Winter Olympics stated that all athletes are encouraged to arrive fully vaccinated. Vaccinated athletes, as well as a small number of athletes and team officials with medical exemptions, will have access to the closed-loop management upon entry.

Participants who completed two-dose vaccination within 14 days before coming to China will enter the closed-loop management system directly after arrival. Those who are not fully vaccinated will be subject to 21 days of quarantine upon arrival.

Zhang Jiandong, a senior official with the Beijing Organizing Committee for the 2022 Olympic and Paralympic Winter Games, said on Wednesday that Beijing is prepared for the Games but added that the COVID-19 pandemic remains the biggest challenge they face.

Experts said that measures such as vaccine mandates and closed-loop management reflect China's strong sense of responsibility as the host nation.

However, observers have also said that transport from landing to leaving the planes is not the critical piece of the puzzle, and the key is how to effectively manage athlete movement between venues and their accommodation.