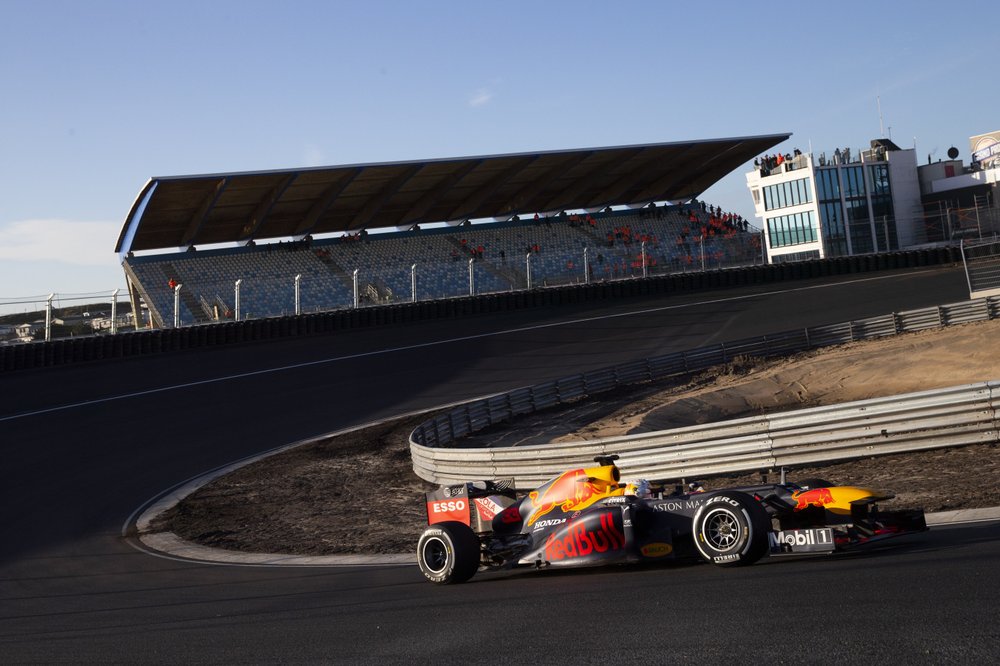 F1 driver Max Verstappen of The Netherlands drives his car through one of the two banked corners during a test and official presentation of the renovated F1 track in the beachside resort of Zandvoort, western Netherlands, March 4, 2020. The iconic Monaco Grand Prix was added Thursday to a growing list of Formula One races to be postponed because of the coronavirus outbreak. (Photo: AP)

The American East Conference announced that two people on the floor during recent tournament games have tested positive for the coronavirus.

The conference and the Collegiate Officiating Consortium issued a joint statement saying the games involved teams in the America East, Horizon League and Metro Atlantic Athletic Conference during play from March 7-11.

The American East Conference says it continues to adhere to the guidance issued by the CDC and federal and state governments and encourages fans to do the same.

The Monaco Grand Prix is among three Formula One races postponed because of the coronavirus outbreak.

The Dutch and Spanish GPs in May were also called off by governing body FIA.

It is not yet clear when the first race of the season can be held.

The first player under the PGA Tour umbrella has tested positive for the new coronavirus.

The tour says Victor Lange of South Africa was diagnosed with COVID-19 upon returning home to Johannesburg on March 9 from playing a PGA Tour Latinoamerica event in Mazatlan, Mexico. He was tested as a precaution while going to a non-virus related doctor’s appointment with a friend. Lange received the diagnosis on Tuesday.

The tour says Lange has no symptoms and is expected to make a full recovery while under quarantine at home in South Africa.

The PGA Tour Latinoamerica is one of six circuits the tour runs. It says in a statement Lange’s diagnosis will allow the tour to alert those with whom he might have come in contact.

Lange has played three events this year — two in South Africa in January and February, and Mexico two weeks ago.

Turkey has suspended its soccer, basketball and volleyball leagues because of the coronavirus outbreak.

Youth and Sports Minister Muharrem Kasapoglu made the announcement after meeting with the heads of the three sports federations.

The soccer league had been continuing without spectators after most other leagues in Europe stopped. Turkish soccer federation president Nihat Ozdemir had argued that the country was one of the least affected by the virus.

Some players and coaches had complained about the league going ahead, expressing concerns for their health.

Trabzonspor announced this week that it had “mutually agreed” to part with former Nigeria captain John Obi Mikel after the former Chelsea player said he did not feel comfortable playing amid the pandemic.

UEFA is giving European soccer clubs extra time and leeway to comply with financial monitoring rules during the coronavirus outbreak.

UEFA says it has extended a March 31 deadline by one month for clubs to show they have no outstanding debts for taxes and transfer fees.

The shutdown of European soccer has deprived clubs of match-day income and many risk getting less revenue from broadcasting contracts if games cannot be played.

The “Financial Fair Play” system monitors at least three years of accounts for hundreds of clubs which qualify to play in the Champions League and Europa League. Clubs which fail to break even on commercial income and spending on transfers and wages risk sanctions which include being expelled from competitions in the most severe cases.

UEFA says the established rules allow for unforeseen circumstances which “is taken into account as part of the clubs’ assessment on a case by case basis.”

The Swedish soccer association says the start of the top professional leagues in the country have been postponed with the aim of playing again in late May or early June.

The decision comes a day after a request from clubs in Sweden’s top two men’s leagues to delay the start of the season until the beginning of June because of the coronavirus outbreak.

The season was due to start on the weekend of April 3-4.

The federation says a detailed program of games will be presented after UEFA clarifies dates for rearranged European club tournaments.

Soccer in England will stay suspended until at least April 30 because of the coronavirus outbreak and the season could be finished in June.

The Football Association and Premier League say they have agreed to extend the suspension from April 4 to April 30. The FA board has waived a regulation which would normally oblige leagues to finish by June 1.

That means the English leagues can continue playing in space that opened up when UEFA postponed the European Championship to 2021.

The FA, Premier League and English Football League say they are “united in their commitment” that the season should be resumed.

The International Weightlifting Federation says it has changed its Olympic qualifying criteria in response to the coronavirus outbreak but won’t say how the new system works.

Olympic qualifying in dozens of sports has been thrown into chaos as continental championships around the world have been postponed.

The IWF says it has drawn up a replacement set of qualifying rules and submitted them to the International Olympic Committee but it won’t tell athletes or national federations about the changes until the IOC signs off on the plan.

The IWF says it has ruled out extending the qualifying period beyond April 30. That means any rescheduled continental championships won’t count.

Weightlifting’s long-standing problems with doping caused the IWF to demand top lifters competed more regularly at international events to be eligible for the Olympics — and to be subject to more doping tests. They were required to compete at least once between November and April.

Gladbach sporting director Max Eberl says the players approached the club with an offer of voluntary pay cuts, and the coaching staff, directors and executives have joined in.

Eberl says “I am very proud of the boys. A clear signal: we are standing together for Borussia in good and bad times.”

Gladbach is fourth in the German league and was on course to qualify for a spot in next season’s Champions League. Gladbach CEO Stephan Schippers says the club and Bundesliga are in their toughest financial situation in more than 20 years because of lost revenue from tickets, TV and sponsorship.

Gladbach played a game last week in an empty stadium. The club estimated it lost about 2 million euros ($2.16 million) in revenue by playing without fans.

In Scotland, Hearts has asked all its players and other fulltime employees to accept a 50 percent pay cut, or contract termination.

The Olympic flame has been handed over, by proxy, to Tokyo organizers in Athens.

The coronavirus outbreak forced a bare-bones version of the usual elaborate ceremony in the stadium where the first modern Olympics were staged in 1896.

The 80,000-seat marble stadium was empty apart from a handful of officials and participants. The Japanese delegation was absent because of travel restrictions and Tokyo organizing committee head Yoshiro Mori delivered a speech by video from Japan. But his message was upbeat.

Mori says “I hereby pledge that on 24 July this flame will be lit at the Olympic Stadium in Tokyo.”

Greek Olympic committee president Spyros Kapralos handed over the flame to a Japanese Unicef official in Athens and former Olympic swimmer Naoko Imoto. It was then headed for the airport to board the flight for Japan.