SPORTS Analysis: Offseason Fix: Where are the free QBs headed?

Analysis: Offseason Fix: Where are the free QBs headed? 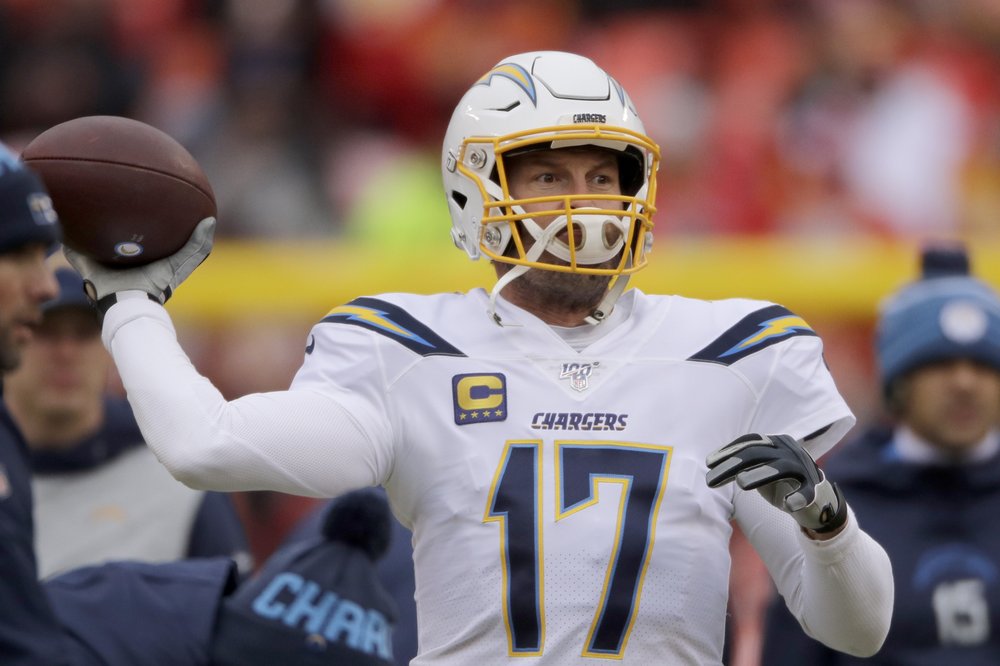 Now that we know Philip Rivers won’t be leading the Chargers into SoFi Stadium in September, the muddied waters of NFL quarterbacking have been cleared a bit.

Just a little bit. Indeed, not knowing where Rivers might be headed, if anywhere, in 2020 doesn’t simplify things at all.

Nearly every one of the NFL’s eight divisions has a team or teams with a quarterback quandary. With the exception of the NFC West, it’s easy to argue that there’s a major hole behind center somewhere.

The one team that seemingly had its quarterback situation on solid ground heading into 2019 is the club with the question mark in this division.

Is Dallas sold on Dak Prescott? At least enough so to commit more than $100 million to him, particularly in light of the Cowboys’ second-half meltdown?

Philadelphia is in fine shape after the way Carson Wentz performed down the stretch with basically half a roster. The Eagles need a veteran backup, though, as do the Giants for Daniel Jones. Washington’s Dwayne Haskins is raw but with tons of upside.

Assuming Drew Brees re-signs with New Orleans — he’s pretty much said he will — and Teddy Bridgewater hits the open market, the only unknown in this sector is in Carolina.

Cam Newton’s recent history of injury and unimpressive performance, combined with a hefty contract, plus a rebuilding project under new coach Matt Rhule almost guarantees he will be on the move. Yet, the Panthers have no clue who should replace him, especially after Kyle Allen struggled late in the season.

Matt Ryan had a strong year despite Atlanta’s struggles. Tampa Bay seems trapped into at least another season with Jameis Winston by franchising him to delay a long-term decision until coach Bruce Arians is certain Winston is (or isn’t) the guy.

Except in Minnesota, where Kirk Cousins is ensconced, there are some uncertainties here.

Green Bay must decide if now is the time to find a down-the-road successor to Aaron Rodgers, a dicey proposition because Rodgers has given no indication he’s contemplating the end of his Hall of Fame-caliber career.

Chicago must figure out if Mitchell Trubisky is the solution. A wise move would be to bring in strong competition for the slumping Trubisky: Marcus Mariota, Andy Dalton, maybe even Nick Foles or Rivers?

Detroit, however, has the biggest problem. No longer is Matthew Stafford its Mr. Indestructible, and the Lions need some serious roster revamping. Stafford deserves better than spending the rest of his career with little chance to compete for a title.

Seattle: Time to talk Hall of Fame for Russell Wilson.

San Francisco: Jimmy Garoppolo isn’t a superstar, but the Niners could win it all with him.

Buffalo (Josh Allen) and the Jets (Sam Darnold) have their young QBs, though Allen needs to make better decisions and Darnold must stay healthier than he’s managed so far.

There’s really no excuse for Miami to not draft a quarterback, and veteran Ryan Fitzpatrick would be a good tutor for Tua.

That leaves New England. Say what?

Yep, after two decades of unmatched success, Tom Brady is without a contract. Owner Robert Kraft publicly supports bringing back the six-time champion, even if his coach has yet to be so supportive. Brady moving on is the most intriguing story line of the offseason, though his winding up with a two-year deal (second season voidable) with the Patriots for massive money is where the smart dollars lay.

No worries for Houston: Deshaun Watson is a star worthy of building around.

Indianapolis seems to feel the same way about Jacoby Brissett, at least for 2020, the final season of his deal.

If Jacksonville opts to go with Gardner Minshew after his sometimes impressive rookie year, it’s likely Foles will be on the move yet again. He costs far too much for the Jaguars to keep him as a backup, although other options also are expensive.

Tennessee learned that Mariota is not its man, and Ryan Tannehill performed so well — leading the league in QB rating — that he’ll get a contract somewhere. Most likely in Music City, but he’s never had such value.

Cleveland has Baker Mayfield, though that’s hardly the certainty for success it seemed after 2018.

Joe Burrow is headed for Cincinnati, though he might have considered the XFL or CFL as a better option.

That leaves Pittsburgh, which fully expects vintage Ben Roethlisberger back from his elbow surgery. That’s a dangerous game to play, especially with such a muddled situation at backup. Strange to think the Steelers could be the most unsettled at QB in this division.

The Chargers have lots of alternatives with Rivers gone. Don’t expect Tyrod Taylor to be elevated. Speculation (read: rumors) targets Brady landing in LA, though he’s not quite a long-term solution. If the Chargers believe Newton can rebound, Dalton can be a winner again, or Foles/Bridgewater is deserving of a starting spot, they could move in those directions.

Obviously, Kansas City has no worries outside of finding room for Patrick Mahomes’ megadeal. Denver is ready to go with Drew Lock, who impressed in December, meaning Joe Flacco will be available.

As for Las Vegas — oh yeah, the Raiders live there now — there remains plenty of suspicion that Jon Gruden would quickly move on from Derek Carr if he saw something more promising.