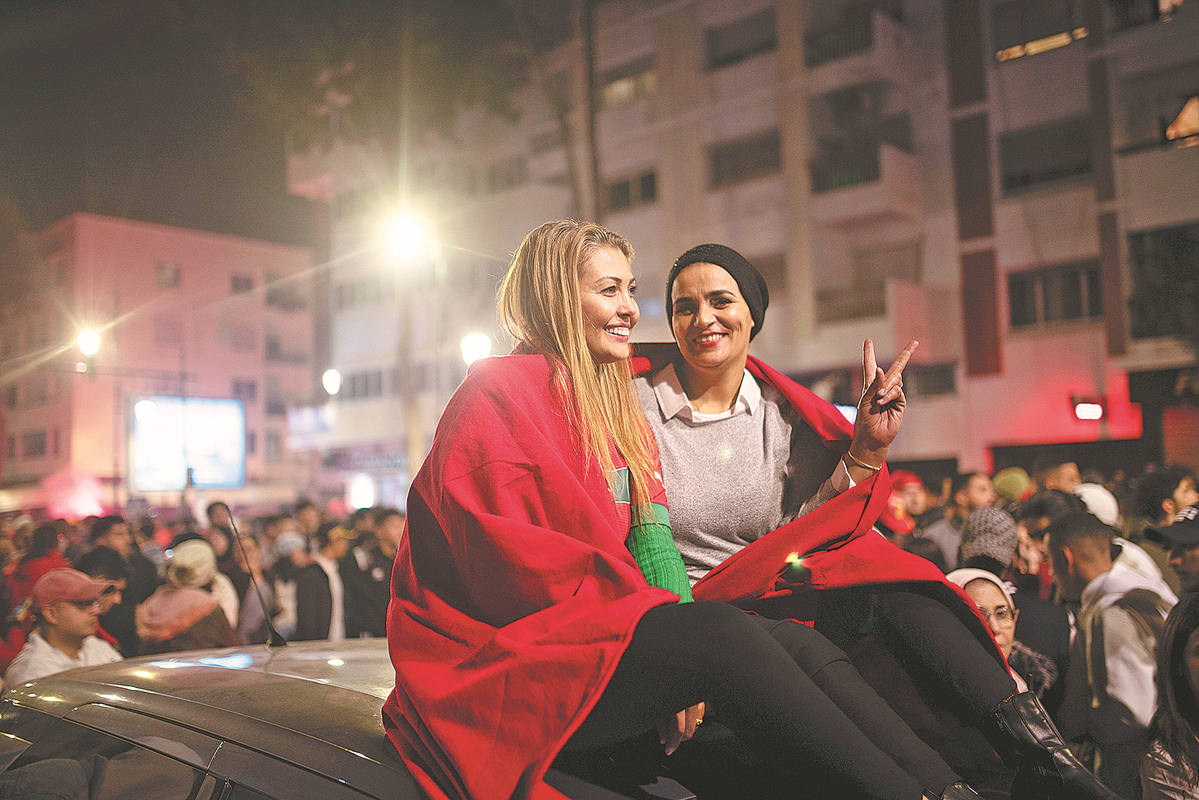 RABAT — Exuberant Moroccans poured into the streets of their capital and in cities across Europe on Tuesday, waving flags and honking horns to celebrate their national soccer team's historic victory over Spain at the World Cup.

Morocco defeated Spain in a penalty shootout, making the Atlas Lions the only team from outside Europe or South America to make it to the quarterfinals in Qatar — and the first Arab team in World Cup history to make it to the last eight.

"We are so proud of our Lions, who fought hard to get us into the quarterfinals," said Niama Meddoun, a Rabat resident. "We are delighted to be Moroccans today, since we are the first Arab country that has reached the quarterfinals."

Mohammed VI, the King of Morocco, praised the national team and sent his "heartfelt congratulations" to the players, the technical team and administrative personnel, "who gave their all and blazed a trail throughout this great sporting event", according to a statement from the royal palace.

The king said the players represented "hopes and dreams of Moroccans in Morocco, Qatar, and all over the world".

Morocco is the only Arab — and African — nation left in the tournament, the first World Cup held in the Middle East. Its World Cup success has reverberated across the Arab world and among Moroccan and some other immigrant communities in Europe.

In Barcelona, Spain's second largest city, a crowd of youths waving Moroccan, Egyptian, Algerian and Palestinian flags gathered in the center, where Barcelona fans traditionally celebrate big victories. People cheered to the sound of drums. Some were lighting flares.

In a Barcelona restaurant where viewers had congregated, people jumped on tables and lifted chairs in the air. Outside, cars honked horns and people lit firecrackers and red and green smoke bombs.

Youssef Lotfi, a 39-year-old construction worker who was born in Casablanca but moved to Spain as a child and said he feels love for both countries, was brimming with pride.

"Today is a day of joy for Moroccans and all the Arab world," Lotfi said.

"It was a heart-attack finish that could have gone either way."

He called the victory a "once-in-a-lifetime" experience. "Morocco is representing all the Arab world, all the African continent, that is beyond description, it is the most glorious part," he said.

In Ceuta, a Spanish exclave which borders with Morocco on the north African coast, the win was also celebrated with cars honking horns. Ceuta's population is a mix of Spaniards and Moroccan residents and workers.

"What pride! What happiness! Now to celebrate with friends. I have lost my voice!" said 20-year-old Ismael Mustafa.

"We were able to pull it off. For Spain? You will win next time, so no worries."

Celebrations across Spain, which has some 800,000 Moroccan residents, were mostly peaceful, though Spanish media reported a brief scuffle between Morocco and Spain fans in a bar in the southern city of Huelva. No injuries or arrests were reported.

In Qatar, Moroccan fans clashed briefly with police outside the stadium before the game started.

Ten days ago riots broke out in Belgium and the Netherlands as Morocco fans celebrated beating Belgium in the group stage in Qatar.

In central Paris, cars started honking almost immediately after Morocco's surprise win, and crowds of people streamed toward the iconic Champs-Elysees to celebrate. Men and women, in business suits or tracksuits, from teenage to middle-aged, cheered or raised their hands in victory. Cries of "Allez, allez!" (Come on!) in French rang out, and one woman asked strangers "Who has a Moroccan flag I can borrow?"

Spain fans were crushed by the loss.

"They have been very unlucky in the penalties, but it seems to me that they have also made a mistake in the players who take the penalties," said 64-year-old Dionisio Sanchez, who was among a group of fans who trickled out of a bar in Madrid.

"They shot with very little enthusiasm ... little desire to score, but the penalties, it's luck, it's a lottery," he said.