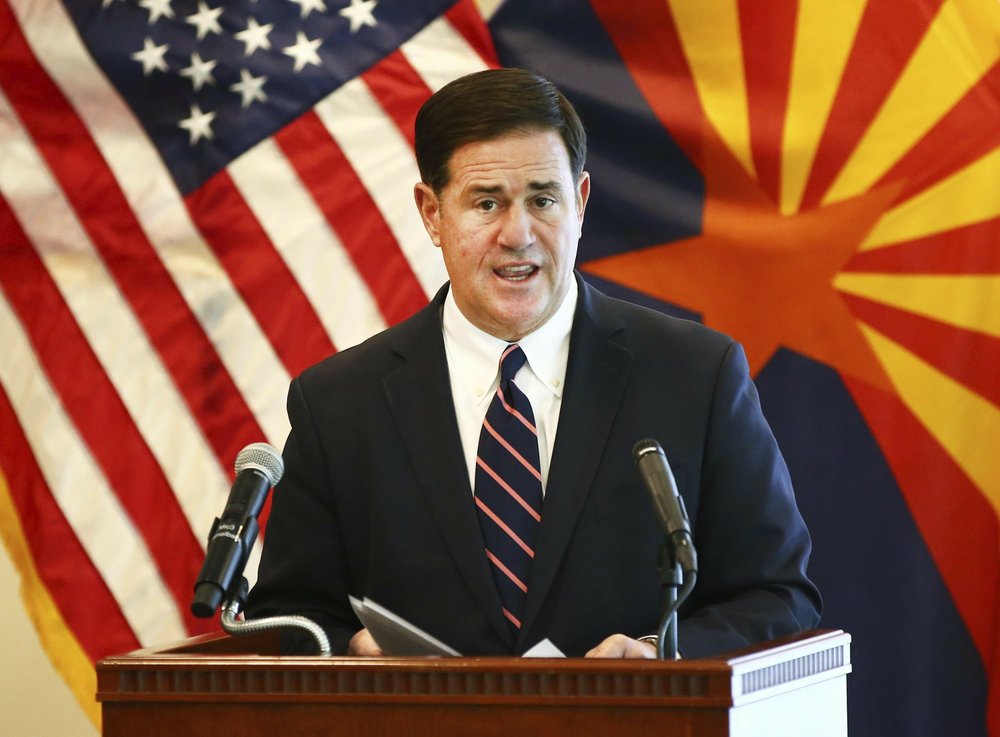 Arizona Gov. Doug Ducey says his state is willing to host all 30 major league teams at the time public health concerns allow, which eventually could lead to the start of the baseball season primarily in empty spring training ballparks.

MLB and the players’ association have had preliminary discussion of potential ways for the season to start if given the go-ahead by federal, state and local governments and health officials. Having all teams based in the Phoenix area is among the contingency plans being examined. There are 10 spring training parks plus the Diamondbacks’ Chase Field, which has a retractable roof, and several college facilities.

“Arizona, at the right time, is very open minded to hosting whatever Major League Baseball would like from the state,” Ducey, a Republican, said Tuesday. “At the time that it would be appropriate for public health, if Arizona were in a position to reopen, we have the facilities that are here.”

“We have the hotel space that is here,” he said. “We all want to make certain that the metrics and the data are proper before we’re able to go forward, but I think two words that would allow the country and the state of Arizona to know that things were headed back to normal would be: Play ball!”

MLB also said Tuesday it is cutting the salary of senior staff by an average of 35% for this year due to the new coronavirus’ impact on the season. MLB is guaranteeing paychecks to its full-time employees of its central office through May.

With no clarity on when the shutdown will end, players and staff intently follow the daily developments.

“I think we’re all concerned that there’s not going to be a season,” Texas Rangers manager Chris Woodward said. “I don’t know when it’s going to be safe, I think the virus will let us know. If that means that we start in June, July, August or not at all, we definitely are all kind of concerned that we may not be able to play this year, and that’s a reality.”

Ducey said he had spoken with Commissioner Rob Manfred about the all-Arizona option.

“There’s a number of different scenarios,” the governor said. “I think the first scenario that was talked about was the idea of these clubs coming, being in hotels and in a way, having their own stay-at-home orders whether it either be at the hotel, or inside the stadium, without fans. ... It’s something that Arizona is open minded to, and I’m open minded to.”

Many players and staff are concerned about the potential of a long absence from family while sequestered.

Minnesota catcher Mitch Garver wondered how the plan would work.

“Where do we live? Who’s allowed to come with us? Are we only allowed to go to the field and back to the hotel? What kind of hotel? What kind of accommodations are we working with? Is there going to be meal money?” he said. “Then you get into player health, and we’re talking about playing in 120 degree weather on spring training fields potentially living out of a visiting locker room.”

Manfred announced the salary cut Tuesday in a memorandum to staff, a copy of which was obtained by The Associated Press. Manfred also said the commissioner’s office will make all planned distributions to teams through May.

“As part of our effort to protect the organization, my senior staff and I have decided to reduce our compensation by an average of 35% for 2020 to help the organization weather this terrible storm,” Manfred wrote in the memo, which described cost-cutting efforts.

“As a result of these developments, I am pleased to be in a position to ensure that all employees that received regular pay checks in April will continue to be paid through May 31,” he wrote. “I am deeply grateful to the owners for supporting my decision to continue to support all of our employees in an environment where the owners and the clubs are facing their own very difficult financial issues.”

MLB’s season was to have started March 26, and teams agreed to advance $170 million to players in salary for the first 60 days of the season. As part of the deal, players agreed to give up claims to the remainder of their roughly $4 billion in salary if no games are played.

Manfred wrote in his memo “we are considering and analyzing a number of possibilities.”

“Only one decision, however, has been made with respect to the 2020 season: Major League Baseball will return to the field only when public health officials agree that it is appropriate to play and when we are convinced that our return to the field is safe for players, employees and fans,” he wrote. “Moreover, we will never, in an effort to begin play, divert resources that are more appropriately devoted to public health initiatives and health care.”

“The savings realized have been crucial to our ability to maintain normal operations in other areas,” he added.

Manfred called the distributions to teams “a vital part of our economic system.”

“Clubs rely on these distributions to meet local obligations and to support the financing vehicles that provide much needed liquidity,” he wrote. “We have informed the clubs that we will be making all of the scheduled distributions for April and May. These distributions will assist the Clubs in paying the salary advances that are being made to players under our recent agreement with the MLBPA.”