As luge season winds down, USA’s Emily Sweeney looking ahead 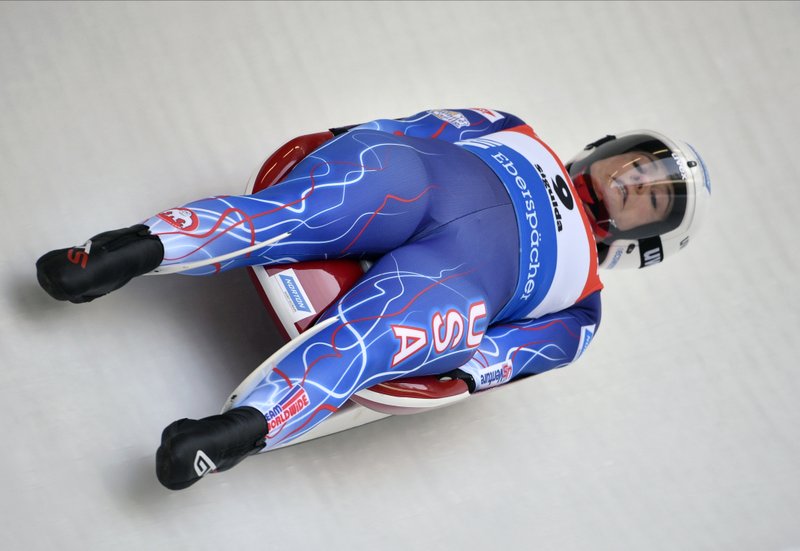 Emily Sweeney of United States speeds down the track during a women's race at the Luge World Cup event in Sigulda, Latvia, Saturday, Jan. 25, 2020. (Photo: AP)

Luge’s World Cup campaign ends this weekend in Germany, where most of the best 100 sliders in the sport will be looking to close their international seasons on a high note.

Emily Sweeney won’t be among them.

Her season ended a couple of weeks ago, on her terms.

The USA Luge veteran is officially two years into her recovery from a crash at the Pyeongchang Olympics that she walked away from — even with a broken neck and broken back — and two years away, she hopes, from being a medal contender at the Beijing Games. She decided to listen to her body and step away from the frantic end of the season, heading home instead to meet her sister’s new baby and formulate a plan for her offseason.

Here’s what she has learned: Fractures heal, but everything else takes time. So while her body still betrays her from time to time on the track, an additional focus on the mental game is what Sweeney hopes will get her to the medal podium in Beijing in 2022.

“I am very comfortable about thinking about my weaknesses because I failed so much early on,” Sweeney said. “ I didn’t make two Olympic teams right in a row. I constantly had to look at myself and say ‘What’s wrong? What am I not like?’ I had to be creative with my training and with the whole process. And so, I think I’m pretty comfortable with challenges.”

That’s why, this season, when she felt like her body couldn’t do it anymore she simply went home. The decision was not easy: Her team is still competing, she has plenty of friends on the circuit and her longtime boyfriend — Italian star Dominik Fischnaller — is a serious contender to win the men’s World Cup overall title.

But a setback right now could throw a serious wrench into her Olympic plans. The problem was pressure, not in the sense of what’s comes with the prospects of winning or losing in a competition, but the massive gravitational force that sliders feel and fight through when they are on the ice at speeds often topping 80 mph. It takes tremendous strength, and Sweeney’s neck still isn’t always up to the challenge. So, with wear and tear of the season taking a toll, she headed home.

“It’s not a question of if I’m good enough,” said Sweeney, who won a medal at last season’s world championships — cementing her status as one of the fastest women on ice. “I see it in my splits. I would have first-place splits, then get to the pressure and I ended up 15th. I just couldn’t keep going through this cycle of pushing it, pushing it, pushing it and then losing all my speed as soon as I can’t hold my head up anymore.”

So she’s working on her body and her mind.

Sweeney is one of the most-upbeat sliders on the luge circuit; always smiling, always happy, and most of the time her good mood is genuine. After the crash, however, the good mood wasn’t always there and it took Sweeney some time to realize that there was more wrong than just the fractures in her neck and back.

“I went into a depression,” Sweeney said. “It’s weird saying that. But it feels foreign to me to say I broke my neck and my back two years ago. And it feels dramatic to say, which I guess I need to just get more comfortable with that. But I think that just the way I was raised was like, ‘All right, brush it off and move on.’ And that’s why I think I appear a lot of times like it’s just sunshine and rainbows, but this one forced me to stop. But you have to. And the alternative is to stay at that low and that just becomes miserable.”

From therapy came a plan: Do one thing a day to feel better toward the ultimate goal of medaling in 2022.

Most days, she succeeds. When Sweeney is right, especially in sprint events, few women in the world have a chance of catching her. Her sliding career is peaking. Her mental game, she thinks, is catching up.

And now she’s got two years to put the whole package together.

“Being an Olympian was my dream since I was 7 years old,” Sweeney said. “And then I became an Olympian, and I said, ‘Well, that’s not enough. I want a medal.’”