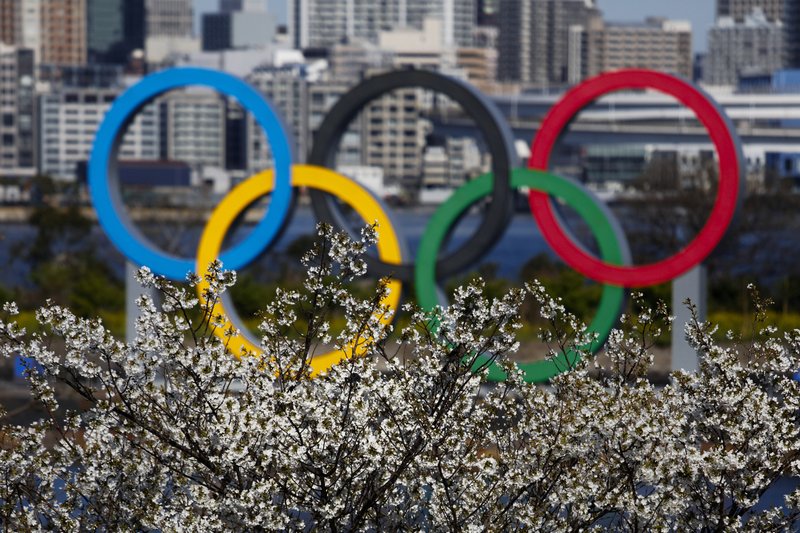 The Olympic rings are seen behind cherry blossoms Wednesday, March 25, 2020, in the Odaiba section of Tokyo. Not even the Summer Olympics could withstand the force of the coronavirus. After weeks of hedging, the IOC took the unprecedented step of postponing the world's biggest sporting event, a global extravaganza that's been cemented into the calendar for more than a century. (Photo: AP)

Athletes completing doping bans over the next year will be eligible to compete in the postponed Tokyo Olympics, an unintended effect of the coronavirus pandemic that has some crying foul.

Turkish runner Gamze Bulut, for example, will now have plenty of time to qualify for a games she likely would have missed had they gone ahead as scheduled.

“It doesn’t seem like a fair punishment,” Irish race walker Brendan Boyce told The Associated Press in a phone interview. “They haven’t really missed the events they were supposed to miss.”

The 2020 Olympics were officially postponed last month for one year, with the opening ceremony now set for July 23, 2021.

Bulut originally won silver in the 1,500 meters at the 2012 London Olympics but was stripped of her medal because of irregularities in her biological passport, which monitors an athlete’s blood profile. She was given a four-year ban that began in 2016 and expires on May 29 — giving her an unexpected full year to qualify for Tokyo.

The Athletics Integrity Unit estimates that about 40 of the 200 or so banned track and field athletes who stand to gain from the Olympic postponement are international-level competitors. The AIU maintains a global list of track athletes banned for doping violations.

Boyce, a two-time Olympian who has qualified for Tokyo, said restrictions on the number of competitors could make it harder for clean athletes to earn places.

“I wouldn’t be too happy now if I lost an Olympic spot because of an anomaly like what’s going on at the minute,” Boyce said.

“I don’t believe in second chances with regards to serious doping offenses unless you provide serious assistance to anti-doping authorities and even then I don’t believe you should have the privilege of being able to compete and earn money from the sport,” Partridge told the AP.

“While an athlete cannot choose when he or she would like to be ineligible, an (anti-doping organization) cannot either,” Banka said. “This is entirely consistent with principles of natural justice and other areas of the law as it relates to sports or even criminal activity. When an offender has done the time, the sentence is considered to be served.”

Sebastian Coe, the Olympic great who is now president of World Athletics, was less definitive in comments shortly after the games were postponed.

“This is something we will need to look at,” Coe said. “I know it’s something the Athletics Integrity Unit, and I’m sure all the other agencies out there in concert with our sports, will need to think about, and that will just be another issue in an overflowing inbox at the moment.”

Athletes who have already qualified for Tokyo have been assured that they’ll keep their spots as future qualification decisions unfold.

Boyce, the race walker, said it would be difficult for an Irish athlete to compete after a doping ban.

“Having a doping ban in Ireland is much more than serving time away from your sport,” he said. “It’s really crippling for your life because you’re basically seen as a criminal. It’s a form of fraud. In other countries, you see some athletes who are on doping bans just training normally and they’re just waiting to come back and nobody in that country seems to be too bothered.”