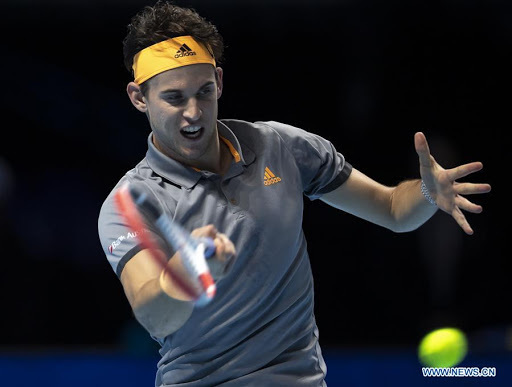 Dominic Thiem of Austria returns a shot during the singles group match against Novak Djokovic of Serbia at the ATP World Tour Finals 2019 in London, Britain on Nov. 12, 2019. (Photo: Xinhua)

The ATP has announced a plan on how to adjust the world rankings due to the COVID-19 pandemic after the men's Tour resumes.

If the ATP Tour restarts as expected in August, the world rankings, which traditionally operate on a "Best 18" results basis over 52 weeks, will now cover a period of 22 months (March 2019 - December 2020). The ATP has frozen the rankings since March 16 this year after the Tour was suspended.

The revised ranking system will be comprised of each player's best 18 results between March 2019 and December 2020.

According to the ATP, a player cannot count the same Tour-level tournament twice in his best 18 breakdown. It gave an example that a player who played in the Mutua Madrid Open in 2019 and plays Madrid again in 2020 can only count the better of those two results.