Aussie softball team first to arrive in Japan for Olympics

Australia's softball team on Tuesday became the first athletes to land in Japan for the Olympics, in a major milestone for the pandemic-postponed Games, which continue to face controversy. 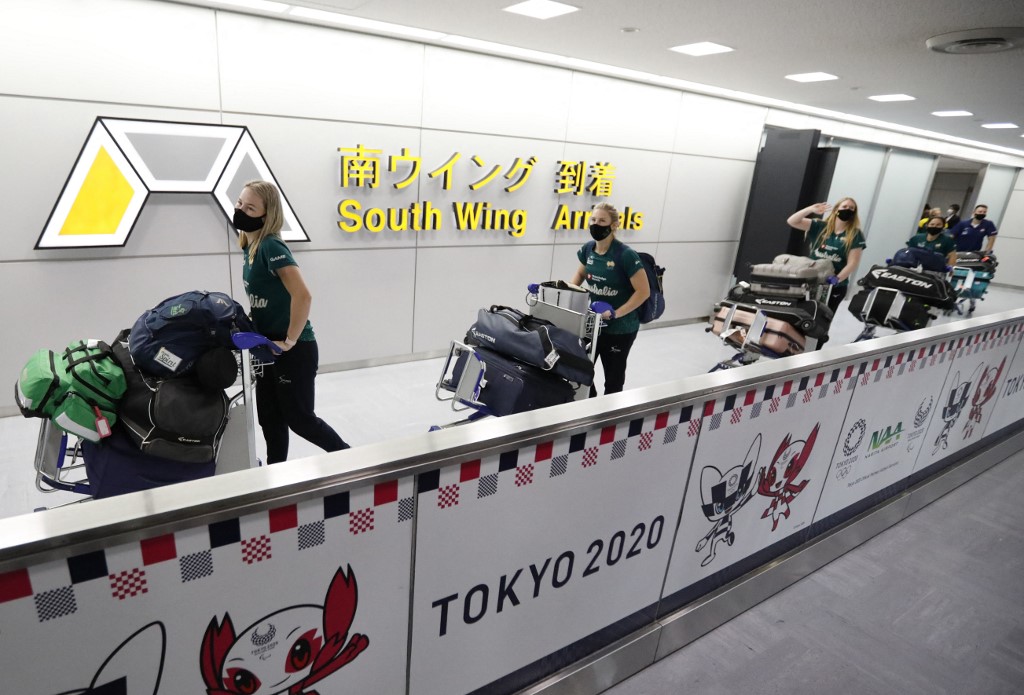 Members of Australia's Olympic softball team, the first national team to come to Japan for pre-Olympic training camp since the Tokyo 2020 Olympic Games were postponed to 2021 due to COVID-19, arrive at Narita international airport in Narita, east of Tokyo, on June 1, 2021. (Photo: AFP)

The "Aussie Spirit" squad touched down in Narita airport outside Tokyo along with their support staff and were immediately ushered off for coronavirus testing.

Sporting facemasks and wearing their green and gold uniforms, they were met by greeters sporting hats decorated with Olympic and Paralympic mascots. They waved to cameras and snapped selfies as they filled out paperwork before testing.

Everyone in the delegation has been vaccinated but they still faced testing before departure and on arrival, and will also be subject to stringent restrictions during their stay.

The arrival will be a boost for organisers who are battling persistent public opposition and doubts about whether the Games can, or should go ahead.

Much of Japan, including Tokyo, is under a virus state of emergency, and polls largely show a majority of Japanese want the Games further delayed or cancelled altogether.

But organisers say detailed virus rulebooks will keep participants and the public safe and note that around 80 percent of those in the Olympic Village will be vaccinated.

Australia's softball team said they were prepared for the rules and happy to be getting back to play after pandemic disruption. For some, Tokyo 2020 could be their last shot at Olympic glory, with softball not featuring at Paris 2024.

"We know it's going to be a bit of a long trip over, we know we're going to go through lots and lots of Covid testing," said player Jade Wall, as the squad prepared to leave Sydney.

"But look, we're all prepared for it, we want to do everything that we can to make sure that we're safe when we get there and we're safe while we're in Japan as well."

The team will head from the airport straight to their training base in Ota city, around 100 kilometres (about 60 miles) north of Tokyo.

The rules will be strict. No family members are allowed, with just 10 staff members travelling with the squad.

And the entire delegation will be kept to a single hotel floor for sleeping, eating and working out at the gym.

"The only reason why (they) would be leaving the hotel is to go to the ballpark and back. They will be having less daily contact with the public than they would in Australia," Softball Australia CEO David Pryles said.

But the trip is still a "huge" moment for the team, who had their Olympic preparations interrupted by the pandemic and have not played together since February 2020, he told AFP.

The squad will be playing local teams and winnowing down athletes to a 15-woman side before moving into the Olympic Village on July 17.

Their first fixture -- against the hosts -- will kick off Olympic competition on July 21, two days before the opening ceremony.

Many cities around Japan have scrapped training camps for Olympic athletes over virus fears.

But Ota's Mayor Masayoshi Shimizu told reporters Monday that the city was proud to "offer support to show our friendship" and maintain long-running ties with Australia.

In another sign of momentum towards the Games, vaccinations of Japanese Olympic athletes begin later Tuesday.

They'll be jumping the queue as Japan's comparatively slow vaccine rollout so far only applies to medical workers and the elderly.

Just over seven percent of people in Japan have so far received a first dose, with around 2.5 percent fully vaccinated, though the pace has picked up in recent days.