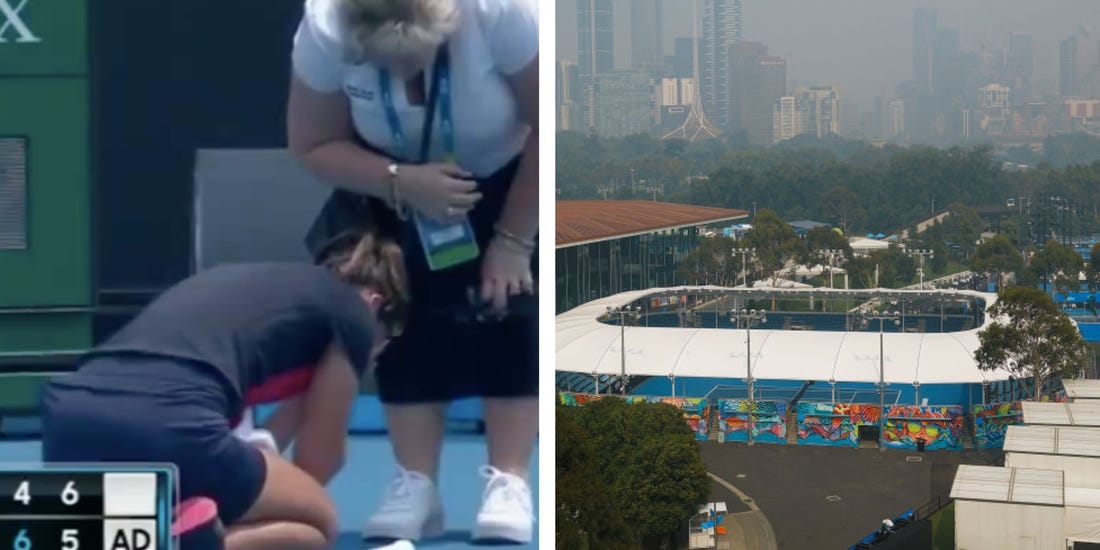 Slovenian tennis player Dalila Jakupovic abandoned her Australian Open qualifying match after suffering from a coughing fit in Melbourne, Australia due to smoke in the air. (Photo: Xinhua)

For the second consecutive day, qualifying rounds for the Australian Open tennis tournament in Melbourne have been disrupted due to poor air quality, with thick bushfire smoke continuing to sweep across the city from blazes in Victoria State's Gippsland region.

"Practice has been suspended until 11am (local time) this morning due to air quality concerns, and play won't start before 1.00pm," Tennis Australia said in a statement on Wednesday.

"Conditions at Melbourne Park are being constantly monitored and further decisions will be made using the onsite data and in close consultation with our medical team, the Bureau of Meteorology and scientists from Environmental Protection Authority Victoria."

"The onsite data and measurements early this morning were similar to yesterday, when practice and play were suspended and delayed."

"Play and practice at tournaments in Traralgon and Bendigo, along with a junior event at Royal Park in Melbourne have also been suspended."

Although, play did eventually get underway on Tuesday after air quality readings began to improve, some players found the choking conditions too much to bear.

During one of yesterday's matches, Slovenia's Dalila Jakupovic was forced to retire after suffering a coughing fit on court.

"I was really scared that I would collapse. That's why I went onto the floor because I couldn't walk anymore," she told reporters after the match."

"I don't have asthma and never had breathing problems. I actually like heat."

"The physio came again and I thought it would be better. But the points were a bit longer and I just couldn't breathe anymore and I just fell on the floor."

Unhappy with the officials decision to go ahead with the tournament in such difficult conditions, the women's world number 180 said, "it's not healthy for us. I was surprised, I thought we would not be playing today but we don't have much choice."