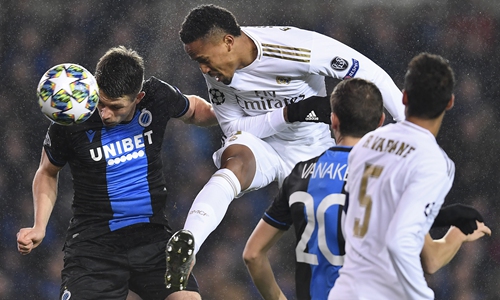 Barcelona and Real Madrid are level on points at the La Liga summit and both face stern tests this weekend ahead of their rearranged Clasico clash next Wednesday.

Barca travel to the Basque Country to take on fourth-placed Real Sociedad on Saturday, while Real visit a resurgent ­Valencia side 24 hours later.

The Catalans, who sit ahead of their great rivals on goal difference with both on 34 points, were able to rest a number of first-team regulars - including Lionel Messi - in Tuesday's 2-1 Champions League victory over Inter Milan having already qualified for the knockout stages.

After a difficult start to the season, Barca have lost just one of their last 16 in all competitions and coach Ernesto Valverde feels they are clicking into gear at the right time.

"We're in a good way. It's good to see this kind of consistency. We had to come through a difficult spell to get to where we are now," he said.

"We had difficulties, with a number of forwards injured and they had to try and get back into form on the hoof, with little time. We always have to win at this club, the players know and feel it. We are really happy with how things are going and we've shown once again that we always want to win, whoever we play."

Saturday's opponents Sociedad have stumbled slightly of late after topping La Liga at the start of November, winning just two of their last six to slip to fourth, seven points off the table toppers.

Meanwhile Madrid, who have won eight of their last 10 in all competitions, travel to a buoyant Valencia, who secured an unlikely berth in the last 16 of the Champions League with an impressive victory away to Ajax Amsterdam in midweek despite missing nine first-team regulars through injury.

Real coach Zinedine Zidane faces a difficult decision on whether or not to rest midfield general Casemiro for the trip to Mestalla.

The Brazilian has started in all of the club's La Liga matches this season, but he is a yellow card away from missing Wednesday's Clasico through suspension having picked up four bookings already this campaign.

"He's played [in the Champions League] and we'll have a look into it for the next game, and see what we do in ­Valencia. He hasn't got much rest, but I'm not going to say what my plan is."

Third-placed Sevilla will hope to take advantage if either of the top two slip up when they host Villarreal, while Atletico Madrid host Osasuna and Eibar visit Athletic Bilbao in a Basque derby.