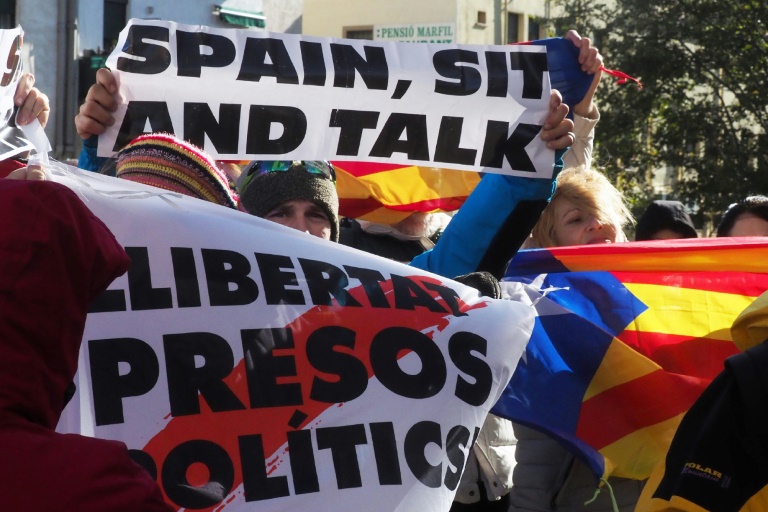 Protesters from the Democratic Tsunami group has called for supporters to gather before Barcelona face Real Madrid on Wednesday. (Photo: AFP)

Spain will deploy a large-scale security operation involving 3,000 personnel at the Clasico on Wednesday, when the likes of Lionel Messi and Sergio Ramos look set to share the limelight with Catalan separatist protests.

Tension in Spain's north-east region boiled over in October when demonstrations and riots caused the original La Liga fixture between Barcelona and Real Madrid to be postponed.

Democratic Tsunami, the protest group advocating another independence referendum for Catalonia, has called publicly for its supporters to gather at Barcelona's Camp Nou stadium from four hours before kick-off at 1900 GMT.

Renewed fears of unrest have even raised the possibility of the match being postponed for a second time.

"It will be played, the Clasico will be played," Barcelona president Josep Maria Bartomeu said on Thursday, a pledge repeated in recent days by sports, political and police authorities in Spain.

Meetings have taken place between the police, clubs and the Spanish Football Federation (RFEF) to ensure the safe arrival of the two squads and referees, as well as the nearly 100,000 fans expected to attend.

The operation will involve some 3,000 security personnel, as well as a cordon to prevent demonstrations blocking entrances to the ground.

In the stands, the numbers of private security staff will also be increased to reduce the threat of pitch invasions that could interrupt the game.

"The operation will ensure that the Clasico is played normally," said the chief commissioner of the Catalan regional police Eugeni Sallent.

The fixture was supposed to be played on October 26 but the RFEF decided to postpone "due to exceptional causes".

Violent protests had broken out in Catalonia after nine separatist leaders were sentenced to heavy prison sentences for their involvement in the independence referendum of 2017.

Democratic Tsunami has previously received support from former Barcelona coach Pep Guardiola and hopes to transmit its message through one of the world's most famous football matches, which has an estimated global audience of 650 million.

In just a few months of existence, the group has already led major acts of disruption. In October, they partially blocked Barcelona airport and in November, they cut off the main motorway between Spain and France for two days.

Tsunami aims to promote both "in the stands and on the pitch" its slogan: "Spain Sit and Talk", a call to negotiate a referendum for independence.

But any details or their plans for protesting around the game remain unknown.

"The plans announced in advance are usually based on three things: expectation, surprise and execution," said the organisation on Saturday during an exchange of messages with the Catalan regional television TV3.

The group has insisted "it has not said it wants to block or suspend the game."

Barcelona have historically had a close association with Catalanism, with Camp Nou routinely used as a setting for flags, banners and chants in support of the movement.

After the rulings on the nine separatist leaders were announced in October, the club released a statement in which it declared prison sentences were not the answer.

"We know we are living in a complex social and political situation but I am convinced that it is compatible with playing a football match," said Bartomeu.

The club could also suffer the consequences of any altercations or interruptions during the fixture.

At a meeting in Madrid last week, the RFEF warned it "will apply the regulations in force," which range from heavy economic sanctions to the closure of Camp Nou to supporters.