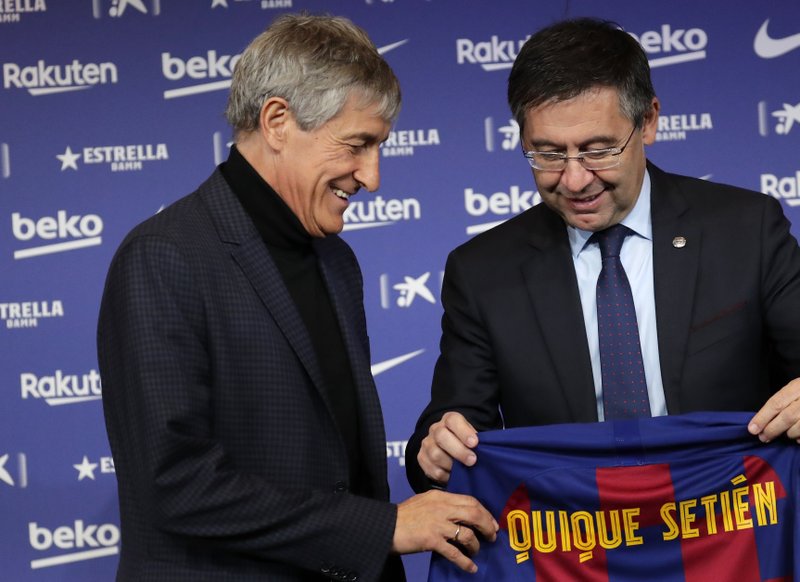 Barcelona had been on track for a record season in revenues, set to surpass 1 billion euros ($1.1 billion) for the first time in club history.

A month later, the club is bracing for losses caused by coronavirus pandemic.

“We are the club with the greatest revenue in the world, but it’s true that we won’t be able to reach the 1.05 billion euros that we had budgeted for,” Barcelona president Josep Bartomeu said in a series of interviews published by Spanish media on Tuesday. “We were on a record pace in February, well above our expectations.”

Bartomeu’s comments came a day after the club cut players’ salaries by 70%, allowing it to save nearly 16 million euros ($17 million) monthly, which he said won’t be enough to make up for the loss of income if competitions remain on hold and the lockdown continues in place for much longer.

“We have no income from ticket sales, TV rights, hospitality, stores, the museum ...” he said. “It’s a very significant decrease in revenue and we are trying to compensate it with the reduction of salaries of athletes and employees, including executives, and with other ways of reducing costs and projects that can be put on hold.”

Spain has been one of the hardest-hit countries by the pandemic, with nearly 95,000 cases of infections and more than 8,100 deaths. It recorded 849 new deaths on Tuesday, the highest daily toll since the pandemic hit the southern European nation.

Bartomeu said he hopes the current situation will start improving in about two months, but losses will likely be inevitable if normality is not restored.

“For the last few days we have been studying how to adjust when the pandemic is over,” Bartomeu said. “We will change models and the way we do things. We will have to adapt and be a pioneer.”

The president said the millions in monthly savings represent nearly 6% of the athletes’ annual earnings. He downplayed conflicts with the first-team players, who on Monday published a letter critical of team officials saying they put the squad under pressure.

Bartomeu said the first meeting with players took place on March 20 with a video conference with Lionel Messi, Sergio Busquets, Gerard Piqué and Sergi Roberto. He said he didn’t want the pay cut to be an imposition and that players were on board with it from the start.

“There were 10 days of constant dialogue,” the president said. “There were a lot of rumors, and certainly there were people inside and outside the club who gave opinions without knowing the real situation. There are lots of measures to help soften the decrease in income, but none could take place without the agreement of the first-team players because they are the club’s foundation.”

The players and the club were also contributing to the salaries of the other workers.

Bartomeu said Barcelona’s measures were similar to those of other top European clubs, including Juventus, which recently also reduced salaries in agreement with its players in Italy.

Atlético Madrid was doing the same in Spain, although Real Madrid has yet to make announcements about its financial changes during the crisis.