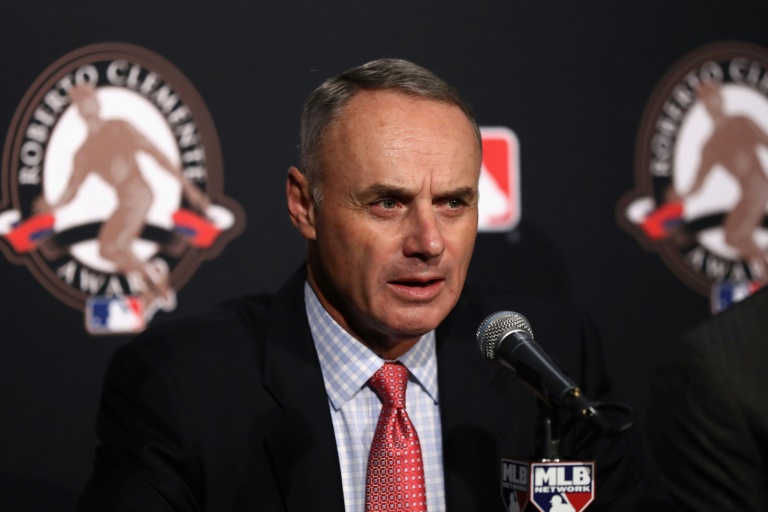 Major League Baseball commissioner Rob Manfred says the American pastime will help the nation recover from the coronavirus pandemic, but only after it becomes safe for sports to resume.

The traditional cries of "Play Ball" were supposed to signal the start of the 2020 MLB campaign on Thursday before sellout crowds with all 30 teams in action.

Instead, the stadiums sat empty and silent as Americans stayed home and deaths and infections continued a steady rise nationwide.

"Baseball will return, just as soon as it's safe to do so," Manfred said Thursday in an open letter to fans.

"We need to call on the optimism that is synonymous with Opening Day and the unflinching determination required to navigate an entire baseball season to help us through the challenging situation currently facing us all."

Manfred hopes for a May return and vows "nothing is off the table" when it comes to staging a season, which he admits is unlikely to include a full 162 games per club and could feature a start without spectators in stadiums.

"Our players will be back and we will be part of the recovery, the healing in this country, from this particular pandemic," Manfred told ESPN.

He said he sees MLB's comeback as "a real milestone in the return to normalcy" much as the sport helped the United States heal after the September 11, 2001, terrorist attacks that also temporarily halted sport.

"I think you saw it after 9-11 in terms of the resumption of play," Manfred told ESPN. "I was there in (New York's) Shea Stadium that night that we began playing -- it was one of the most memorable games I've ever attended.

"It's an honor for our sport to be regarded in a way that we have been, part of our country coming back from some horrific events. We hope that we can play a similar role with respect to this one."

Manfred says MLB is listening to experts from the US Centers for Disease Control and Prevention and World Health Organization when considering possible dates to start the season.

"Throughout our history, baseball has helped us get through difficult times," Manfred's letter said. "Baseball will continue to be here as we face these challenges together... and we look forward to when we can safely get back on the field and hear the words, 'Play Ball.'"

When the season begins, it might include playing two seven-inning games as double-headers rather than typical nine-inning contests and staging the playoffs and World Series at a warm-weather neutral venue in November to allow regular-season games deep into October.

"My optimistic outlook is that at some point in May, we'll be gearing back up," Manfred said.

"The goal would be to get to as many regular-season games as possible and think creatively about how we can accomplish that goal.

"Our fans love a 162-game season and the post-season format we have -- we're probably not going to be able to do that this year. I think that's clear."