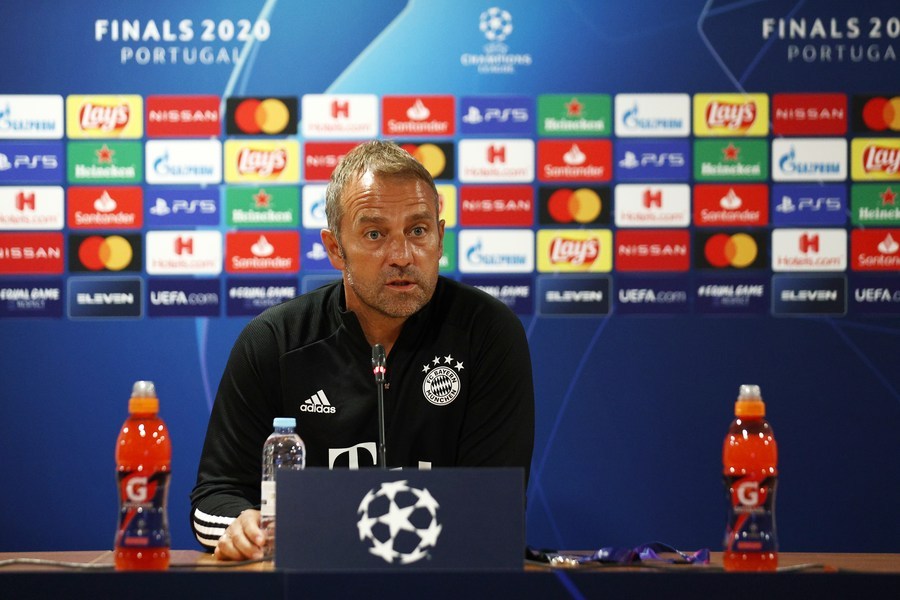 Hans-Dieter Flick, head coach of Bayern Munich, speaks to the media during a press conference ahead of the UEFA Champions League Semi Final match, Aug. 18, 2020. (Photo by Julian Finney/UEFA via Xinhua)

During the Champions League last-16 duel against Lazio, the 2020 treble winners coach spoke about a brief meeting ending a smouldering dispute amongst the club management.

"We met and agreed to do everything to ensure we play successful football for the benefit of the entire club," Flick said. The 56-year-old spoke about the necessity to concentrate fully on ending the season on a high note.

"We are both happy with the meeting and feel great relief," the Bayern coach said.

Flick and Salihamidzic had argued about their opposing views regarding the club's squad policy.

While German media said only a fragile peace had come out of the summit, German record international Lothar Matthaeus is convinced, the talks will pay off for Bayern.

"I'm sure Hansi Flick will stay with Bayern longer than this season. He is having fun coaching such a high-quality team," the 59-year-old said.

Matthaeus said one of Bayern's most valuable abilities is to focus everything on achieving success and the team stands for speed, determination, and positivity.

"They can repeat last season's Champions League success. I see only one team in their way. That's Manchester City and Pep Guardiola," said the former captain of the national team.

Midfielder Joshua Kimmich said the dispute didn't affect the team, "but as we all know, the tensions are far from ideal, and we all want to continue without them."

The recent talk can help the team reach this season's goals, such as winning the 9th consecutive league title and the Champions League.

Insiders are saying that club leaders are demanding an end to the dispute and get everyone working towards the same goal of winning trophies.

Media articles suggest discussions between the two parties were in no way harmonious. It is said that Flick and Salihamidzic were "just not getting along with each other".

Flick compared the situation to a "a marriage when you sometimes argue about different opinions."

The Bayern coach spoke about the sporting director's difficulties to buy new players due to the pandemic but made it clear that he is the one in charge of the team. He had demanded more influence when it comes to transfers.

It nevertheless seems that the two have made a temporary truce.

Midfielder Kimmich may have said he has no worries regarding Flick as "remaining our coach as he has a contract until 2023." However, the German international also seemed well aware the situation could still lead to Flick's departure at the end of the season.

Not only is the German Football Association considering hiring Bayern's successful coach, top European clubs are also on the hunt for Flick's services.