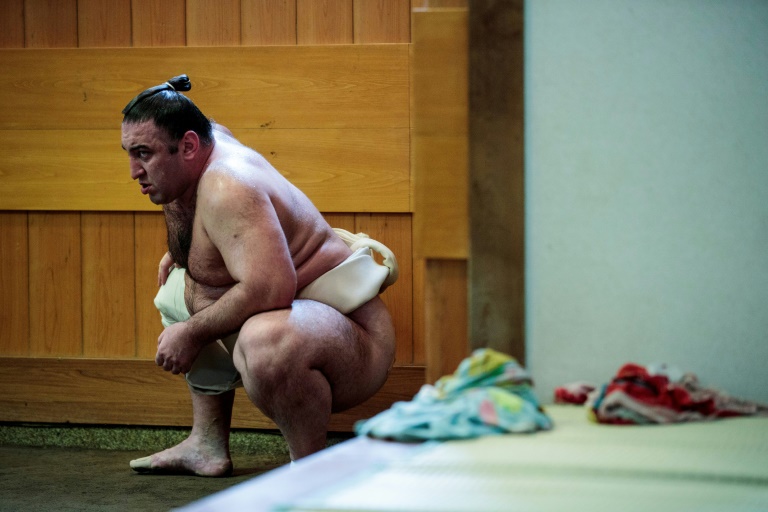 The sumo champion hauls his giant frame from the ground, sand and clay caking his sweaty back and fury flashing from his eyes as he chastises himself for his defeat.

His 178-kilogramme (392-pound) body and white mawashi, or belt, are commonplace, but his bright blue eyes and Western features instantly mark out Georgia-born Levan Gorgadze as different in the traditional Japanese sport.

As a teen in 2006, Gorgadze left his mountain village in the Caucasus near the ancient Georgian city of Mtskheta for the bright lights of Tokyo, a city with 10 times as many people as his entire home country.

It hasn't been an easy path for Gorgadze, one of a growing number of foreign sumo stars, who has faced homesickness, injury and even being beaten with a golf club on his way to the top of the sport.

His story typifies the difficulties encountered by overseas sumos, who started making their mark in the 1980s and have to negotiate the sport's arch-conservatism and spartan lifestyle if they are to succeed.

Sumo has also been dogged by multiple scandals in recent years including allegations of bullying, illegal betting and links to organised crime.

"My mother was against it but I took the decision on my own," Gorgadze, 32, told AFP in a rare interview for a sumo, speaking at his stable after training.

He quickly found that the life of a trainee sumo wrestler was not for the fainthearted.

Cloistered in a stable, or heya, in the Tokyo sumo district of Ryogoku, the wrestler's days are filled with chores and punishing early-morning training sessions.

One thing he does not lack is food: wrestlers have to consume gargantuan portions of chankonabe, a high-calorie stew designed to add bulk.

The heyas are one of the last vestiges of traditional Japanese life and there is no privacy -- the junior wrestlers eat, train and sleep as a group.

Despite this, Gorgadze said that "at first, I felt sad and isolated... annoyed by the (obligatory) wearing of a kimono and fastidious rules".

He pined for his native village. "I couldn't speak Japanese... I didn't even have a mobile phone to call home."

However, he persevered and rose up the ranks to become ozeki, the second-highest grade after yokozuna (grand champion).

Now known by his Japanese wrestling name of Tsuyoshi Tochinoshin, he says he "learned everything" in Japan, above all "look after your colleagues because we all have to live together".

The camaraderie is clear at training as the wrestlers move around the sumo dohyo, or ring, with surprising grace, bringing each other water or brushing dirt from the back of a defeated stablemate.

Beaten over a kimono

The inspiration for Gorgadze came back in 2005 when he watched compatriot Kokkai, then a low-ranked 24-year-old, defeat Mongolian yokozuna Asashoryu for the first time, a win that sent shockwaves through the sumo world.

As a junior judo star, Gorgadze took easily to sumo and trained initially at the prestigious club at Nihon University to become one of the sport's expanding cohort of foreigners.

His journey to the rank of ozeki was not without incident, however. In 2011, he was one of three wrestlers beaten with a golf club for appearing in public without a kimono.

He also suffered injuries that ruled him out of several tournaments, or bashos, and has had to win back his rank after demotion. He has recently suffered another demotion after an injury-hit basho.

When in Tokyo, he sometimes gets a taste of home by listening to ancient Georgian polyphonic chants or eating traditional fare such as khachapuri -- bread stuffed with cheese -- or satsivi, chicken in a walnut sauce.

Back in Georgia, he is treated as a returning hero and greeted by huge crowds at Tbilisi Airport on his occasional trips home.

"I can only say good things about Levan. Ever since childhood, he was a good kid. And he has become a successful man the whole village adores," said one neighbour, 43-year-old Nino Suramelashvili.

His mother has now changed her mind about her son's unusual career choice.

"I am very proud, I am very happy that my son has achieved such success. In the sports world, he is a bright star. And besides that, he is a very good person with his human qualities," says Nunu Markarashvili under the shade of the vines.

And his uncle Tristan Maghradze cries: "Long live Tochinoshin. Levan Gorgadze. My famous nephew whom I am proud of, he is a worthy person."

Gorgadze is not sure what his future holds but one possibility is obtaining Japanese citizenship to be able to open his own sumo stable. His dream is to see "lots of Georgians taking up sumo".