Fourteen years after 2008, the Olympic flame took another historic run in Beijing, the only city in the world to host both Summer and Winter Olympic Games, amid the festive atmosphere of Chinese New Year. 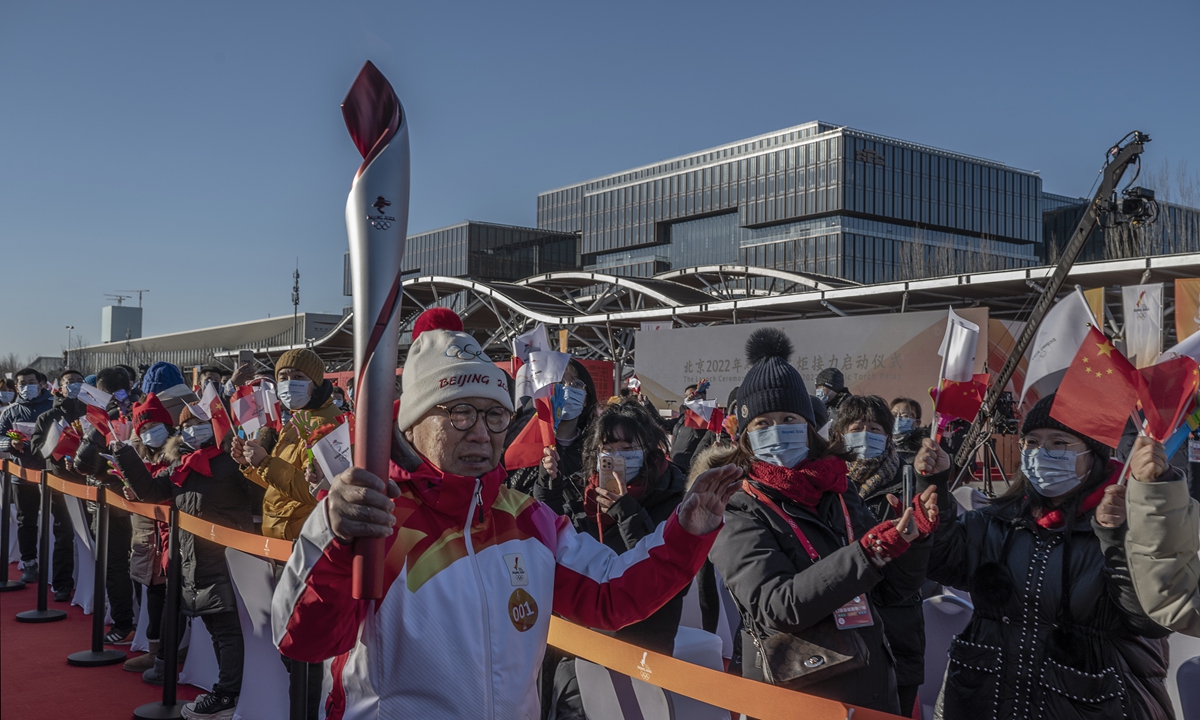 In the torch relay on Wednesday, about 130 people, including sports legends, anti-COVID heroes, and space scientists, participated in the relay, ranging in age from 41 to 80.
The -4 C temperature didn't dampen the excitement, as the Olympic flame is often associated with a message of hope and is the most powerful symbol of the Olympic Movement. Vice-Premier Han Zheng, also a member of the Standing Committee of the Political Bureau of the Communist Party of China Central Committee and head of a leading group overseeing the Beijing 2022 preparations, lit a creatively designed cauldron in Beijing's Olympic Forest Park with the Olympic torch on Wednesday morning, marking the official start of the descaled three-day relay.
Cai Qi, President of the Beijing 2022 Organizing Committee, member of the Political Bureau of the CPC Central Committee, and Secretary of the CPC Beijing Municipal Committee, gave a speech in person, which was followed by a video message from IOC President Thomas Bach.
In his speech on behalf of the International Olympic Committee, Bach said "The Olympic flame will show everyone that Beijing is ready to make history, becoming the first-ever host of both summer and winter editions of the Olympic Games. This is the timeless message that the Olympic flame will send from China to the world: we can only go faster, we can only aim higher, we can only become stronger, if we stand together.
Han Zheng declared the official start of the torch relay of the Beijing 2022 Olympic Games, holding high the torch before handing it to Luo Zhihuan, who then ran into the Olympic Forest Park.
Luo, 81, is China's first world champion in winter sports as the Gold medalist of the men's 1500m at the World Speed Skating Championships held in Karuizawa, Japan in 1963.
Jing Haipeng, captain of the Chinese Astronaut Corps, took up the flame as the second torchbearer.
The 77-year-old Chinese aerospace expert and consultant to China's lunar exploration program Ye Peijian also participated in the relay.
"I am very honored and happy to participate in the torch relay… We Chinese team of astronauts have similar spirit of the Olympics and wishes to pass it on generation after generation," Ye was quoted by the CCTV as saying.
Memetjan Wumer, who came to Beijing from Ili Kazak Autonomous Prefecture of Northwest China's Xinjiang Uygur Autonomous Region and who was awarded the July 1 Medal, the highest honor given by the Communist Party of China, is the 4th torchbearer of the relay.
Qi Fabao, a PLA regiment commander who sustained head injury while fighting bravely in the Galwan Valley border skirmish with India, became a torchbearer during Beijing 2022 Winter Olympic Torch Relay on Wednesday.
Qi, the regimental commander from the People's Liberation Army (PLA) Xinjiang military command, who suffered a serious head injury during the Galwan Valley border skirmish on June 15, 2020, took the flame from Wang Meng, China's four-time Olympic short track speed skating champion, at Winter Olympic Park on Wednesday.
A community worker at the scene, surnamed Meng, told the Global Times on Wednesday that she is very excited and proud to witness Beijing becoming the first city in the world to host both the Summer and Winter Olympics, which shows the world that Beijing is open, inclusive and strong.
"Olympic Forest Park is a new park in this thousand-year-old ancient capital, which also symbolizes the dynamic side of Beijing and shows the world that the Chinese people will look forward to the future with a more enthusiastic attitude," she said.
The Beijing Organizing Committee for the 2022 Olympic and Paralympic Winter Games unveiled earlier in January that there will be about 1,200 torchbearers for the Winter Olympic Games and about 600 torchbearers for the Paralympic Games, among them the eldest is 86 years and the youngest is 14.
The relay is scheduled between February 2 and 4, 2022 (the date of the opening of the Games). The three host zones of the Games Beijing's city proper, Beijing's Yanqing District and the city of Zhangjiakou in the neighboring Hebei Province will welcome this traditional relay.
The torchbearers come from various parts of society, and most of them have made outstanding achievements or contributions to their own area or field, and some are also representatives and celebrities from all walks of life in fields like science, education, culture and health.
While drawing inspiration from the traditional Chinese idea that "Taoism follows the laws of nature, and nature and humanity are one", this year's Olympic torch design is a continuation and development of the torch design of the 2008 Olympic Torch Relay. The auspicious cloud pattern on the "Flying" torch returns in the colors of silver and red, which symbolize ice and fire. The Olympic flame and torch will bring light and warmth to the world of ice and snow.