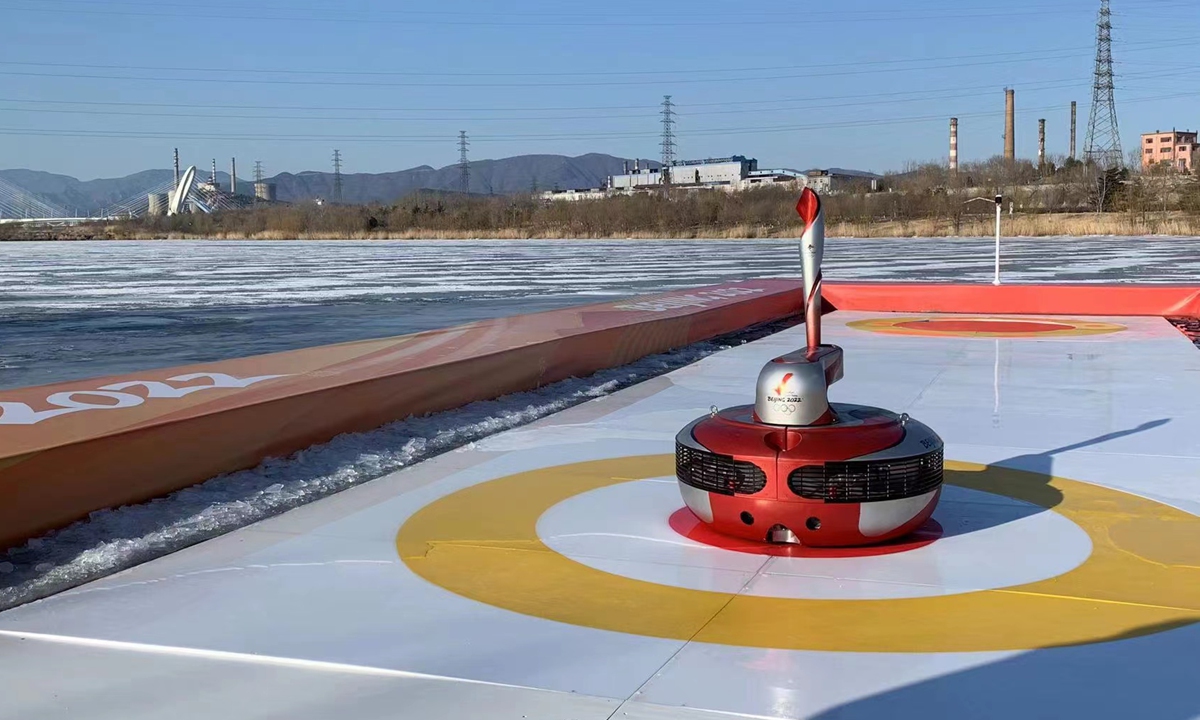 The pictured is a curling-like amphibious droid, one of the two robots to perform the underwater torch relay on Wednesday. (Photo: 31 Research Institute of the Third Academy of CASIC)

Beijing staged a futuristic show in its Olympic torch relay on Wednesday, presenting the world a fantastic underwater rendezvous between two robotic torch bearers, marking a first of its kind in the Olympic history.

It is worth noting that, also a first in the Olympic history, that the underwater flame of the torches in the Beijing Olympic relay adopted a special smoke-free environmental-friendly gaseous fuel, and designers with the 31 Research Institutes of the Third Academy of state-owned space giant China Aerospace Science and Industry Corporation (CASIC) proudly shared with Global Times that it just proved the high-tech and green and clean characteristics that China has promised to the world in the 2022 Beijing Olympics.

Compared to the foreign underwater torches that were lighted with solid fuel, whose flame would come with pollution, the one for Beijing 2022 Winter Olympics would be overcoming designing difficulties and adopting gaseous fuel, which is smokeless and free of pollution, they said.

Under the witness of the whole world, the curling-like amphibious droid took over the flame from the No. 254 human torchbearer An Guoyu and waltzed to the hole of the iced Yongding River in Beijing on Wednesday, before it connected with another submersible robotic partner.

The second robot, after around 8 minutes, lifted the flame out of water and passed it to the 255th torchbearer An Yixiang, marking a success of the feat.

Li Chunguang, director of a key laboratory with the research institute who oversaw the project, told the Global Times that to enable the flame to keep burning when the torch goes underwater, the designers had to overcome difficulties such as sustaining the temperature and pressure difference between the two different medium of burning.

Li and the designing team compared the special combustors inside the torch for the underwater relay to those in a tiny liquid or gas propellant rocket.

The world first saw an underwater Olympic torch in Sydney 2000 Olympics when the torch was able to burn underwater by flare composition loaded at high pressure into a steel tube.

During the Sochi 2014 Olympic Torch Relay, a torch bearer brought the lit torch below the surface of Lake Baikal, the world's deepest lake, to a depth of 13 meters, before passing the Olympic flame to the next leg, which marked a first torch relay in Olympic history between human bearers.

Zhang Bo, torch team technical leader with the CASIC, told the Global Times that the gaseous fuel torch has two advantages. Primarily, it is the clean, which does not produce a lot of white pollutants like solid fuels, making it clean and environmental friendly.

The second is that the gaseous fuel torch has a floating feeling, presenting a tongue of flame. Its form and color are closer to the normal flame. So, the effect of this flame will be more floating than the previous underwater torch, making it more agile and beautiful, he noted.

According to the developers, the special underwater torch looks very much like the Feiyang torch design. The Beijing 2022 Olympic torch, named "Flying" (Fei Yang in Chinese), features a striking inner red "blazing ribbon" that contrasts with a second ribbon that is silver-plated on the outer edge of the torch.

Beijing Olympic organizers who have witnessed rehearsal of the underwater relay have spoken highly of it, saying it is "breathtaking and touching."