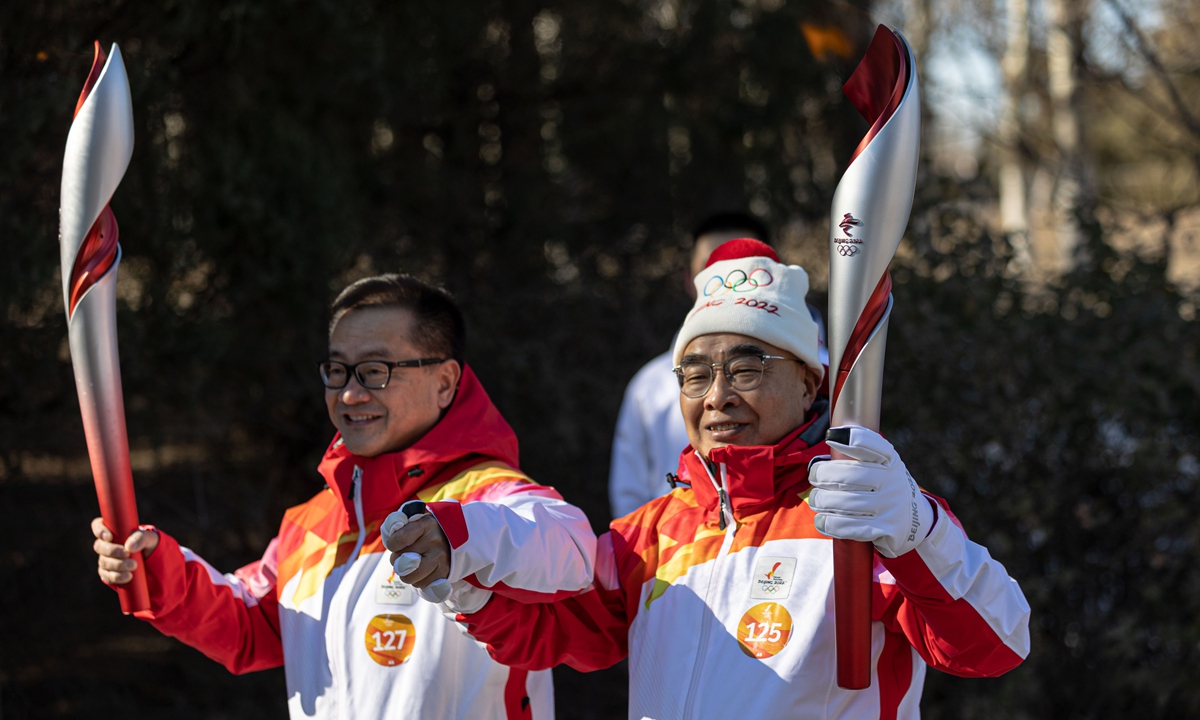 Two of China's top anti-COVID experts made an appearance in the highly anticipated torch relay for Beijing 2022 Winter Olympic Games on Wednesday, hailing Beijing's achievement to host the Olympic Games amid the pandemic.

Although the Games will be held under the COVID-19 pandemic, experts say the Winter Olympics will further demonstrate to some biased Western media and politicians the reasons for the success of China's anti-epidemic model at close range.

Zhang Boli, 73, an academician from the Chinese Academy of Engineering and head of the Tianjin University of Traditional Chinese Medicine (TCM), who has played an important role in the fight against COVID-19 in Wuhan, held the flame, running through the Olympic Forest Park before passing the torch to Tong Zhaohui, another top medical adviser who fought against the outbreak in Wuhan.

It is glorious to participate in the torch relay as a medical worker representative, and see people's trust and recognition of our work, Tong told the media in a public interview.

Tong, who laughed at himself as a beginner skier, is the chief physician of the respiratory and critical medicine department at the Beijing Chaoyang Hospital.

At a time when the whole world cannot function properly because of the pandemic, the Beijing Winter Games represent the confidence and hope of human beings, Tong said.

"We are well prepared to make sure Beijing is safe… With the cooperation of anti-epidemic workers and medical staff, the closed-loop bubble operates very well," Tong told the Global Times on Wednesday.

"We can do better than Tokyo," Tong added.

Zhang, who revealed that he attended the opening ceremony at the 2008 Beijing Summer Games and is still taking 6,000-7,000 steps every day to keep fit, said he is happy for Beijing, the first "dual Olympic city" ever.

"Beijing becomes more beautiful, more powerful… Beijing is currently the capital of the world," he told the media.

As to whether the West can drop its bias against China's epidemic response model after experiencing the Beijing Winter Games, Zhang said Beijing at least offers a stage for foreigners to feel the reasons for China's success in the battle against COVID-19, and what China is doing to fight the virus scientifically and precisely.

"China will show how it fought the epidemic to foreign Olympic participants, who may tell others why China succeeded," Zhang told the Global Times," I think it will be instructive for many foreigners."

As an expert in traditional Chinese medicine, Zhang told the Global Times that his team has prepared some winter tea for the staff members to strengthen immunity and prevent disease.

Both the anti-epidemic spirits and the Olympic spirits represent a sense of responsibility, vitality and dedication, Zhang said.

Although Zhang stressed that The Year of Tiger (2022) and winter sports both represent vitality and courage, he said people should not take the pandemic lightly as the Omicron variant is not just a flu.

In the torch relay on Wednesday, about 130 people, including sports legends, anti-COVID heroes, and space scientists, participated in the relay, ranging in age from 41 to 80.