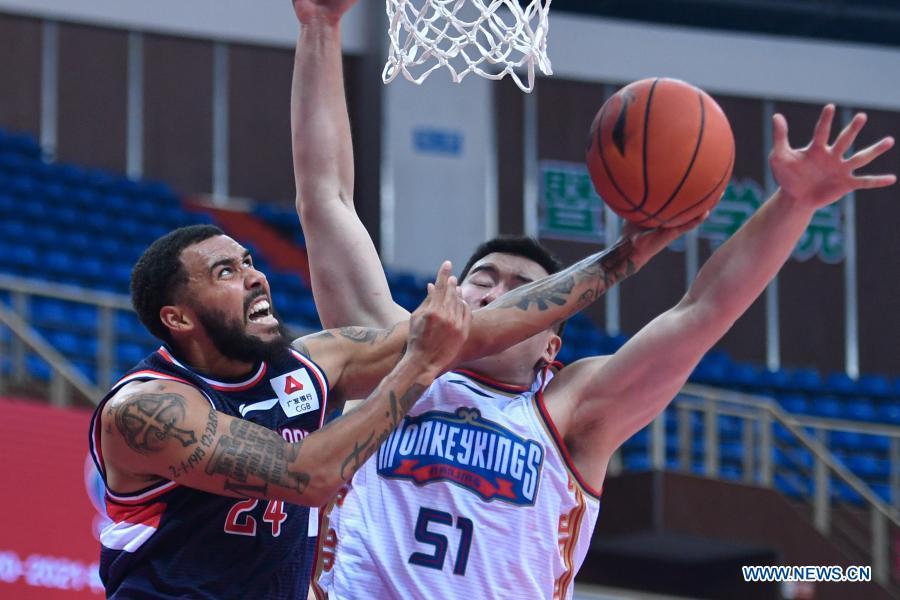 Dallas Moore (L) of Guangzhou Loong Lions goes up for a basket during the 15th round match between Nanjing Monkey Kings and Guangzhou Loong Lions at the 2020-2021 season of the Chinese Basketball Association (CBA) league in Zhuji, east China's Zhejiang Province, Dec. 6, 2020. (Photo: Xinhua)

The Beijing Royal Fighters beat the Tianjin Pioneers 111-95 on Sunday evening for their fourth straight win in the Chinese Basketball Association (CBA) League while the Xinjiang Flying Tigers overcame the Qingdao Eagles 113-101.

Joseph Young and Andrew Harrison of the United States had 19 points apiece to lead five Royal Fighters in double digit scoring, with Yu Changdong adding 16 points and 14 rebounds. Thanks to their fourth victory in a row, the Royal Fighters improved to an 8-7 win-loss record.

Recovering from Friday's upset loss to the Guangzhou Loong Lions, Xinjiang defeated Qingdao on the back of a great team effort and a balanced offense. Donatas Motiejunas of Lithuania led six Xinjiang players with double digits with 25 points and 12 rebounds, Liu Lipeng and Zhou Qi added 22 and 15 points respectively and Zeng Lingxu contributed 10 points and nine assists.

"Motiejunas did a great job today. It's only his third game into the season and he is getting better and better," said Xinjiang coach Adiljan. "I am glad to see that we have learned from the loss against Guangzhou and improved our game today."

Liu attributed his career-high scoring performance to the coach's trust.

"I have to thank my coach for his confidence in me," said Liu. "I don't know whether I can do so well in shooting again in the following matches, but I am sure I will keep doing my best whenever I am on court."

Darius Adams' game-high 50 points turned out to be in vain as Qingdao slipped to a 9-6 win-loss record.

In Sunday's other action, Guangzhou trounced the Nanjing Monkey Kings 100-79 for their second win in two matches.