Belarus plays on as world soccer shuts down due to virus 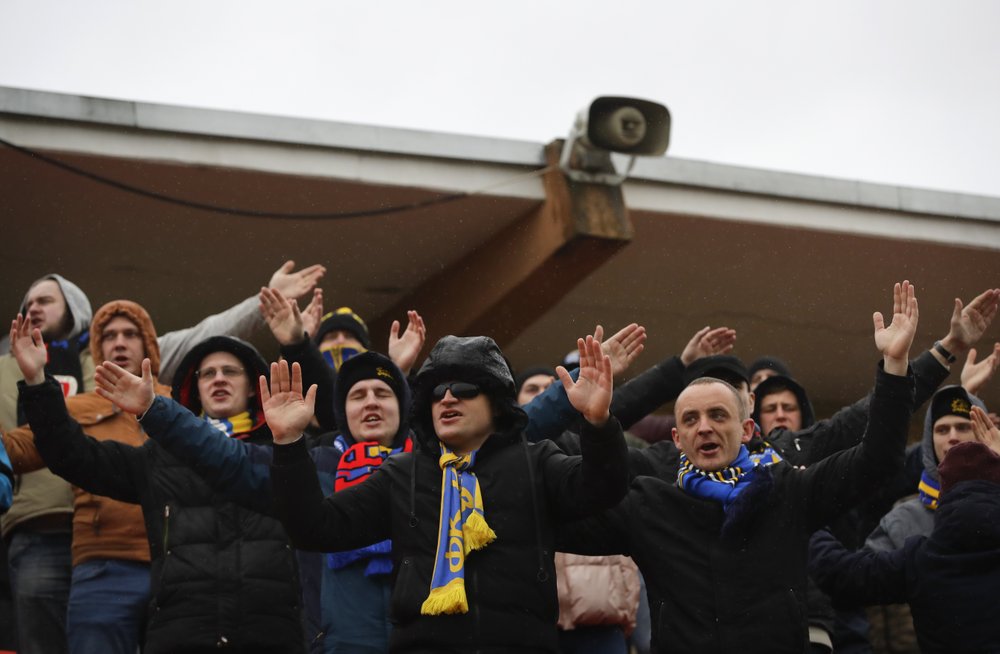 In this photo taken on Thursday, March 19, 2020, soccer fans of FC Bate cheer during the Belarus Championship soccer match between Energetik-BGU and Bate in Minsk, Belarus. (Photo: AP)

Almost all of Europe has suspended soccer games amid the coronavirus pandemic, but Belarus is just getting started.

On an artificial field, the Uzbekistan forward danced through BATE’s defense and scored the opening goal to cheers from spectators spread out along the stadium’s only stand.

The game was in pride of place on international gambling websites. Shortly before Belarus kicked off its season, the only other up and running pro league in Europe was suspended after a meeting between the Turkish government and sports officials. Russia and Ukraine held out longer than most nations but suspended play Tuesday as the virus continued to spread.

The sudden rise to soccer prominence of Belarus, a country of 9.5 million located between Poland and Russia, is largely down to President Alexander Lukashenko. As other neighboring countries have closed their borders and shut down public events, he’s argued such measures go too far.

“I am absolutely convinced that we could suffer more from panic than from the virus itself,” he told a meeting of officials on Thursday. Neighboring Russia’s border-security measures were “complete and utter stupidity,” he added.

As of Friday, Belarus had 69 confirmed cases of the virus.

Belarusian officials insist they’re not starting the season just to suspend it later. Unlike most of Europe, it runs on a calendar-year format, playing from March through December to avoid the snow-bound winter.

“Despite the nervy circumstances around the start of the new season, the Belarusbank Top League is still heading off on its 30-round journey,” the Belarus Football Federation said in a statement. “We are sincerely happy at this news and invite fans to come to the stands.”

The sheer scarcity of soccer around the world could make the Belarus league attractive to broadcasters desperate to fill time amid empty schedules.

Federation spokesman Yuri Primakov told The Associated Press on Thursday that numerous TV companies had expressed interest, but said any further details were a “commercial secret.”

European gamblers had a choice Thursday evening of Belarus, a Brazilian state championship game or a friendly between two Swedish fourth-tier clubs. Australian competitions in various sports are still going on in empty stadiums, but the time difference makes them hard for many to follow.

In Turkey, players pressured the league to shut down, saying they felt it was unsafe to play. Former Chelsea player John Obi Mikel left the Trabzonspor club because he was opposed to the league continuing, even in empty stadiums.

Belarus says there’s no such unrest from its international contingent, which includes players from Africa, Brazil and France.

“Not a single foreign player has refused to play in the championship,” Primakov said. “Everyone is in place and will play.”