Belgium ended England's hopes of reaching the Nations League finals with a 2-0 win on Sunday while Italy edged closer to next year's title shake-up. 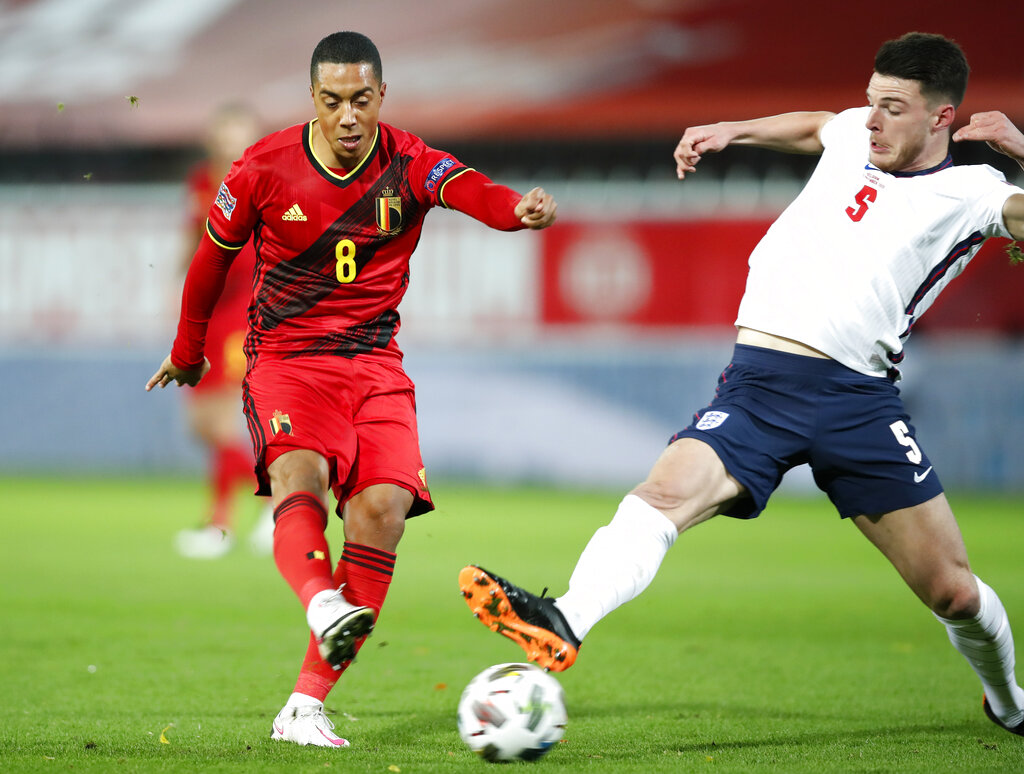 Belgium were just five minutes from joining world champions France at next October's finals when Iceland pulled level at 1-1 with group rivals Denmark in Copenhagen.

However, a stoppage time penalty by Christian Eriksen gave the Danes a 2-1 win and kept alive their chances of pipping Belgium to top spot in Group A2.

Leicester midfielder Tielemans's deflected effort went in off the post after 10 minutes.

Fourteen minutes later, Declan Rice was harshly punished for a challenge on Kevin De Bruyne just outside the area and Mertens curled the resulting free-kick perfectly over the wall to give Jordan Pickford no chance.

"We were always in control at 2-0, sometimes it can be dangerous, you feel comfortable but we defended Thibaut Courtois's goal very well," said Belgian coach Roberto Martinez.

A second consecutive defeat leaves England down in third place, five points adrift of Belgium, with just one game remaining.

"We don't like losing, but enormous credit to the team, all the way through they created problems and defended resiliently," said Southgate.

Denmark's late winner over Iceland means Belgium still need a point when they host the Danes on Wednesday to secure their place in the final four.

In Copenhagen, Iceland, whose Euro 2020 hopes were dashed by Hungary in a 2-1 play-off defeat in midweek, suffered more agony.

Eriksen gave the Danes the lead from the penalty spot after 12 minutes following a foul by Ari Freyr Skulason on Daniel Wass.

Vidar Orn Kjartansson levelled for Iceland in the 85th minute but another penalty by Eriksen in the second minute of injury time after a handball by Hordur Magnusson gave the Danes the three points.

Italy brushed off the absences of several players and coronavirus-hit coach Roberto Mancini with an impressive 2-0 victory over Poland.

The Azzurri took top spot in Group A1 from the Netherlands, who beat Bosnia and Herzegovina 3-1 earlier in the day.

Italy will be sure of a place in next October's finals with victory over the Bosnians in Sarajevo on Wednesday.

Chelsea midfielder Jorginho opened the scoring in the 27th minute with a penalty awarded after Grzegorz Krychowiak had brought down Andrea Belotti.

In the 77th minute, Poland had Jacek Goralski sent off before the Italians added a second goal from Domenico Berardi.

"It's our culture, Italians give their best during difficult moments and become more united," said assistant coach Alberico Evani whose 41-man squad had been whittled down to 28, due to injuries, as well as positive and inconclusive Covid-19 tests.

Frank de Boer won his first match as Netherlands coach after Georginio Wijnaldum scored twice in the win over Bosnia.

Liverpool midfielder Wijnaldum struck his goals early in the first half to help new coach De Boer break his duck at the fifth attempt following three draws and a defeat, with Memphis Depay scoring the other for the dominant Dutch.

"It had been five games since we'd won, so it was a good feeling to win again," said Wijnaldum.

"If I'm playing more in a sitting role, I don't get in the box that often, but tonight I was playing as a No10 so I'm expected to. I basically just did my job."

The Dutch go to Poland in their final group game but even a win won't be good enough should Italy prevail in Bosnia.

In promotion ties, Scotland failed to follow up their heroics of reaching a first major tournament for 22 years as Steve Clarke's men were beaten 1-0 by Slovakia, their first defeat in 10 games.

Jan Gregus's deflected strike on 32 minutes decided the meeting of two teams who qualified for Euro 2020 this week.

Wales winger David Brooks sealed a 1-0 win over the Republic of Ireland.

After a seventh successive clean sheet in all competitions, Wales -- unbeaten in their last 10 games -- need a point on Wednesday against Finland to earn promotion to League A.