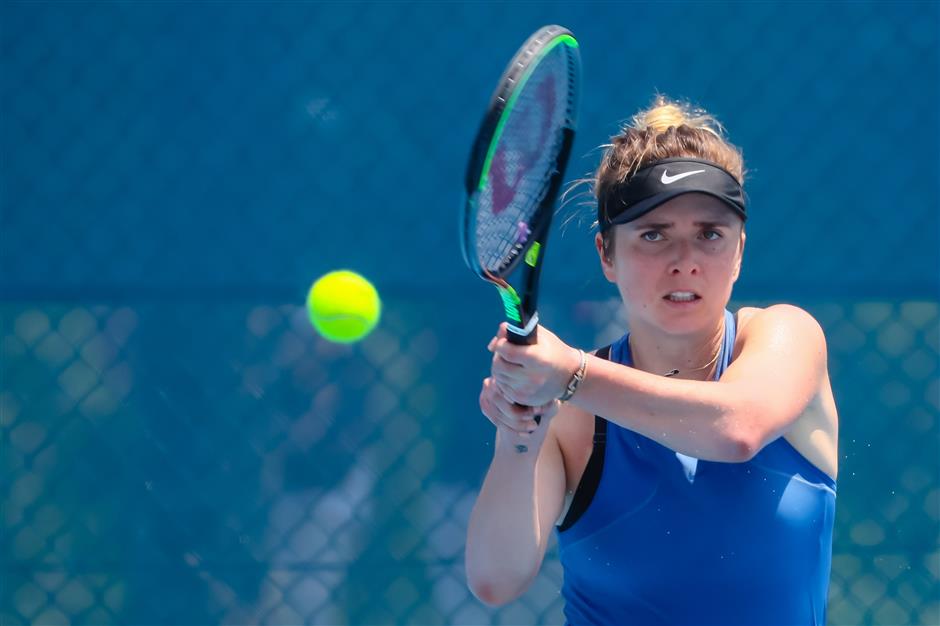 Elina Svitolina of Ukraine trains ahead of the Brisbane International at the Pat Rafter Arena in Brisbane, Australia, on Saturday. (Photo: SHINE)

Belgium's Elise Mertens made a winning start to 2020 as she eased past Ukrainian Lesia Tsurenko 6-3, 6-3 in the opening round of the Shenzhen Open on Sunday.

Tsurenko, who was playing her first tournament in nearly six months after recovering from an elbow injury, broke her opponent's serve in the opening game before Mertens responded in style.

With the Australian Open just two weeks away, third seed Mertens reeled off four consecutive games and held on to the advantage to seal the opening set.

A rare lapse in concentration cost Mertens two break-point opportunities to open up a 5-1 lead in the second set but her solid service rhythm guided her to a comfortable win in just over 90 minutes.

"The first match is always a little tricky but I think I managed it pretty well and mentally stayed calm," said the 24-year-old, who is chasing a sixth career title.

Home favorite Zhang Shuai looked in complete control as she dismissed Magda Linette 6-4, 6-2, extending her dominant record against the Pole to five wins in as many matches.

Zhang's victory on center court came only hours after 18-year-old wildcard Wang Xiyu rallied from a set down to oust Romanian Sorana Cirstea 3-6, 6-1, 6-1.

Wang will next face Mertens for a place in the quarterfinals.

Reigning champion Aryna Sabalenka of Belarus, ranked 11th in the world, begins her defense against Margarita Gasparyan of Russia on Monday.

Meanwhile, Elina Svitolina believes the progress she made in 2019 will help her achieve her ultimate goal of becoming the first Ukranian woman to win a Grand Slam singles title.

Speaking ahead of the season-opening Brisbane International, the 25-year-old insisted she was ready to take the next step after promising so much over the past five years.

Svitolina has long been touted as a future major champion, but despite reaching a career-high world ranking of three and winning 13 titles on the WTA tour, until 2019 she had never reached the semifinal stage at a Grand Slam.

However, last year she made the semifinals at both Wimbledon and the US Open and she said this showed she was on the right path.

"Making semifinals definitely brought me the belief that I could take one step further," she said.

"I had the chance to play on the biggest stages and that gave me lots of confidence at that particular point."

Svitolina had a mixed year in 2019. Although she also made the decider at November’s WTA Finals, where she fell to world No. 1 Ashleigh Barty, she also failed to win a title for the first time since 2012.

"I think maybe 2019 was tough because there were more sad moments, I would say. But also, it's tough to really understand what's going on because the year is very long," she said.

"You have to lose almost every single week, so you have to take lots of positives somehow, and that's, I think, what I learned from the past year, that you have to stay really positive in even bad moments and try to move forward."

Svitolina has brought former men's No. 8 Marcos Baghdatis onto her coaching team to assist Andrew Bettles in a bid to give her game an extra dimension.

"As an ex-player he sees the game from his point and it's something different that I was looking for to add into my game," Svitolina said.

"For sure we improved massively with Andy for the past years I've been working with him and he knows me very, very well.

"(But) for me it's important to add the small things that can improve my game and that's what I'm looking for."

Svitolina, who won the Brisbane title in 2018, will open her 2020 campaign against American Danielle Collins.