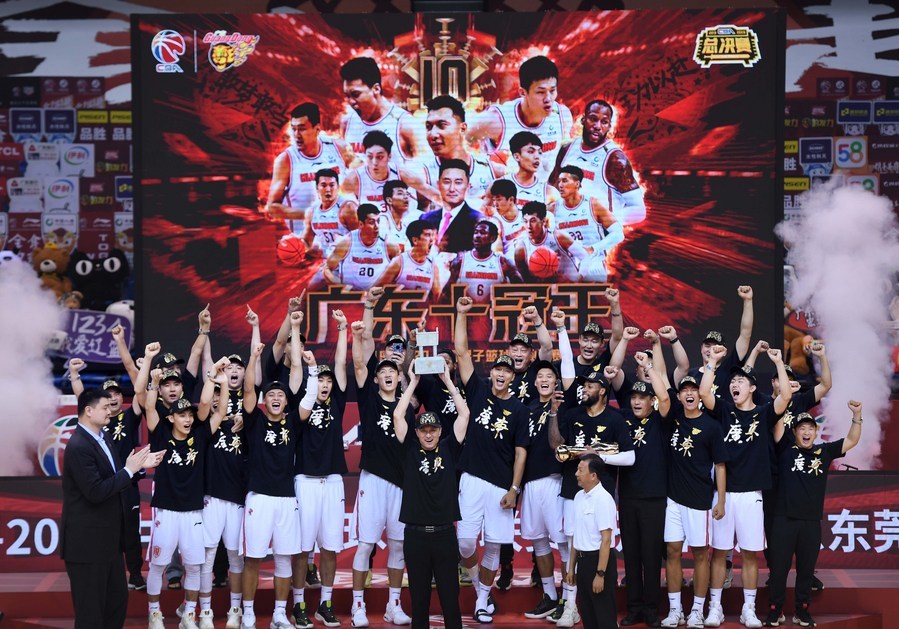 The resumption of the 2019-20 season basketball has symbolized that the Chinese social life started going back to normal.

Due to the COVID-19 pandemic, the league was suspended for 132 days. Because of the absense many of the league's overseas players, the competitive level of the season wasn't the highest. However, the restart and conclusion of the later part of the season was hugely symbolic.

"As the first large-scale national sports event to be restarted in China, the return of the CBA has far-reaching significance for promoting the resumption of work and restoring order to life. Its social impact has gone beyond basketball itself," CBA president Yao Ming said. 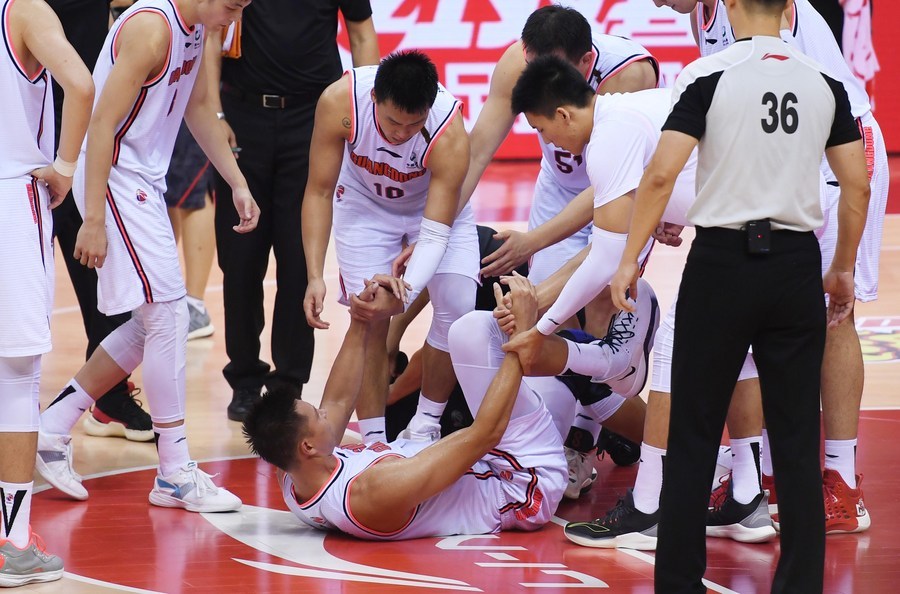 Yi Jianlian (below) of the Guangdong Southern Tigers is helped up by his teammates during the third game of the final round against Liaoning Flying Leopards in Qingdao, Aug. 15, 2020. (Photo: Xinhua/Li Ziheng)

As one of the most popular sports in China, basketball has hundreds of millions of fans. While the COVID-19 pandemic kept people away from basketball for months, the restart of the CBA season was greatly inspiring for many.

"It is a blessing for the fans to watch the home team play and cheer for good basketball again," said CBA fan Li Fei.

"Anti-virus" was an important theme throughout this closing stage, with the CBA releasing a poster in homage to anti-virus heroes, including renowned respiratory expert Zhong Nanshan, whose team gave professional guidance for the league's resumption.

Zhong was also invited on Friday to watch a game courtside along with his wife Li Shaofen, a former Chinese national basketball player.

"You are making a contribution to the whole country," said Zhong to the league. "You are the inspiration for me and my staff."

For the safety of everybody involved, all resumed games were played behind closed doors, with the league having dispatched credentials of different colors to different groups.

Players, coaches and referees were given green credentials, while yellow and blue credentials were provided to reporters and staff in the arena respectively. People in the green area were unable to conduct any close contact with those of credentials in other colors.

Equally, people with different credentials were restricted to specific areas within the arena. When doing interviews or attending press conferences, reporters had to keep a two-meter distance from players and coaches.

The league continued in a safe atmosphere, and on July 26, the CBA decided to allow a limited number of fans into the arena to cheer the teams on.

As a result of such stringent preparation, no one related to the CBA games in Qingdao tested positive for COVID-19 during the two-month schedule. 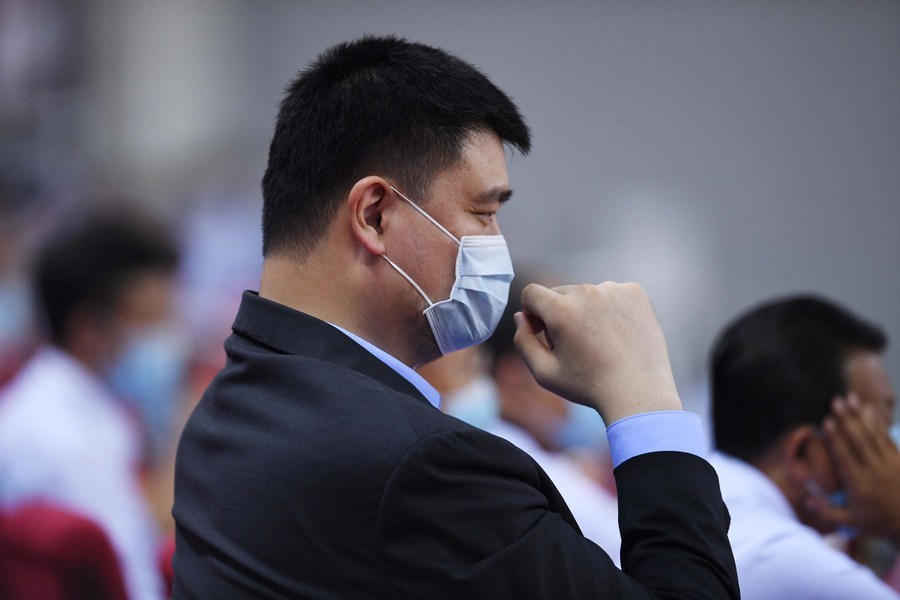 In April 2019, Yao and CBA disclosed the "CBA 2.0" plan, which was designed to upgrade the league in many ways.

Important games such as the season opener between Liaoning and Guangdong, and the "Beijing Derby" between the Beijing Ducks and the Beijing Royal Fighters were given more attention. The league also helped clubs renovate their arenas.

In terms of broadcasting, media made full use of new technology to provide fans with a better viewing experience.

During the All-Star weekend, organizers combined basketball with traditional Chinese culture, designed to appeal to both younger and older generations.

"We are trying hard to make the league a better product, good enough to attract more consumers."

The games were still far from perfect, but they turned out to be attractive enough. According to CCTV data, the regular season's viewing numbers surpassed those of the entire previous season.

Many overseas players were unable to travel to China due to international travel restrictions amid the COVID-19 pandemic, meaning 11 out of the league's 20 teams played the restart with an all-domestic roster.

Under such circumstances, domestic youngsters had more time to show their talents.

21-year-old freshman Qi Lin finished with an average of 10.6 points over his latest five CBA games in his debut season. He became a reliable scorer for the Xinjiang Flying Tigers, and played an important role in Xinjiang's journey into the semifinals.

"Victory is the priority. I would like to be more energetic on the court and more aggressive on the defensive end," said Qi, who dropped out of the prestigious Tsinghua University to join Xinjiang last year. 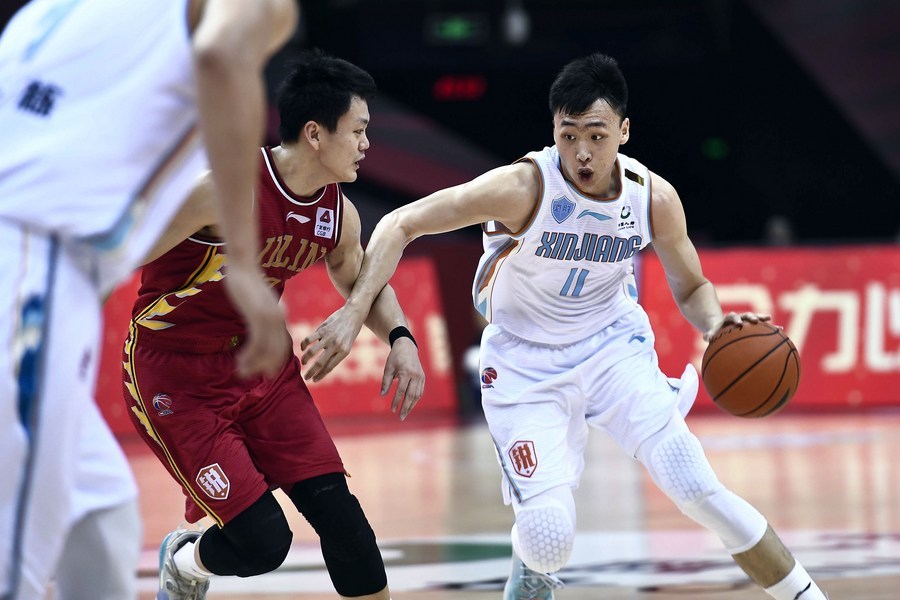 After scoring 48 points, including nine three-pointers in the quarterfinals, guard Wu Qian of the Zhejiang Golden Bulls became known as the "Steph Curry of the CBA".

"If I had buried one more or had made one less mistake, the result might have been different. This season is over, and I won't let you down next year," Wu wrote on social network Weibo after Zhejiang lost to Liaoning.

"Wu became more experienced this season, and I hope he continues working hard and leads the team going ahead," said Liu Weiwei, head coach of Zhejiang.

Wu's teammate Cheng Shuaipeng also became a key player for Zhejiang after the league resumed, as he scored a career-high 43 points while facing Joseph Young, the top scorer of the 2019/20 regular season of CBA.

"Despite fewer overseas players, CBA games are still fascinating. I look forward to more wonderful performances from the post-95s and -00s generations," a basketball fan said.