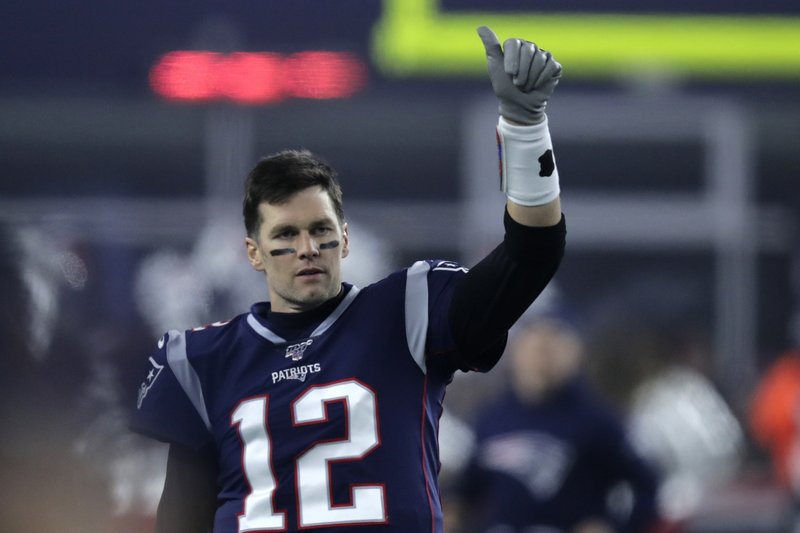 In this Jan. 4, 2020, file photo, New England Patriots quarterback Tom Brady gestures to a teammate before an NFL wild-card playoff football game against the Tennessee Titans in Foxborough, Mass. A highlight of the opening weekend of the NFL season will have Brady's regular-season debut with Tampa Bay against Drew Brees at New Orleans on Sept. 13 — the first matchup of 40-plus quarterbacks in NFL history. (Photo: AP)

Tom Brady’s move to Tampa Bay didn’t just create ripples with fans. It caused networks to drastically rework their last-minute requests with the NFL scheduling office to make sure the Buccaneers got as many high-profile dates as possible.

When the NFL’s regular-season schedule was announced on Thursday night, all of the league television partners were satisfied with how Tampa Bay’s games were distributed. The Bucs are slated to make five prime-time appearances (one Thursday, two Sunday night, two Monday night) with all of them slated between Weeks 5-12. That’s a pretty big audible for a team that was expected to have maybe two at best before signing Brady.

Pending developments in the coronavirus pandemic, Tampa Bay’s opener at New Orleans will be Fox’s featured “America’s Game of the Week,” as will the Oct. 18 game against Green Bay. CBS will showcase the Bucs in the 4:25 p.m. EST window on Nov. 29, when they host defending Super Bowl champion Kansas City. Fox — which has the NFC and Thursday night packages — has Tampa Bay nine times, while CBS, ESPN and NBC each have them twice. The Week 16 game at Detroit will be on either Fox or NFL Network, which will be determined later in the season.

Fox has five of Tampa Bay’s first six games, including its first prime-time game on Thursday, Oct. 8 at Chicago.

“I can’t think of a single player move ever that adjusted requests and turned the process upside down as much as this,” said Fox Sports senior vice president Michael Mulvihill about Brady signing with Tampa Bay. “I think the league treated everyone well with Tampa Bay because they knew how great everyone’s interest was. It was a significant curveball.”

“They are still going to be a big story for us. Plus, I will never sell Bill Belichick short,” CBS Sports chairman Sean McManus said. “They still have a great tradition and legacy.”

Here are other takeaways from the networks about their packages:

Los Angeles’ SoFi Stadium and Las Vegas’ Allegiant Stadium will get their own spotlight during the first two weeks. New stadiums have traditionally received the Sunday night game in Week 2, but this is the first time since 2002 that there have been multiple openings.

The Rams opener against Dallas is the NBC Sunday night game on the opening week, while the Raiders’ first game in Las Vegas will be on Monday night in Week 2, against New Orleans. The Sept. 21 game also marks 50 years since the first Monday night game, and will be simulcast on ABC and ESPN.

“We expressed an interest in having either game,” ESPN executive vice president of programming Burke Magnus said. “We will likely add a couple more elements because it is a big event, not only historically but with the Raiders moving into their new home.”

ESPN’s opening week doubleheader has Pittsburgh at the New York Giants, marking the fourth time in the last five years an interconference game has kicked off its schedule. The late game is Denver hosting Tennessee.

Six of the first seven games on “Sunday Night Football” will be from the West Coast, including San Francisco and Seattle getting to host two early games apiece on NBC. Executive producer Fred Gaudelli said this is the first time he can remember having a predominant western slant to the early schedule.

Of those six matchups, only one is a division matchup — Rams at 49ers on Oct. 18. Seattle hosts New England (Sept. 20) and Minnesota (Oct. 11), while the Niners have an intriguing matchup on Oct. 4 against Philadelphia. Gaudelli is also intrigued with having San Francisco’s late-season game at Dallas on Dec. 20.

McManus was extremely pleased that CBS was able to retain most of the Chiefs’ marquee matchups. Besides the Week 4 game against New England, CBS also has the Nov. 29 contest at Tampa Bay, and Dec. 20 at New Orleans. The Chiefs will have five games in the late afternoon spot during CBS doubleheaders.

Kansas City will kick off its title defense in the opening game on Sept. 10 against Houston, which will be on NBC. Its only Monday night appearance will be at Baltimore on Sept. 28.

If the revised golf majors schedule remains, Fox and CBS should be in good shape. Fox has a single-header in Week 2, when the U.S. Open is slated to take place, with six of its seven games beginning at 1 p.m. EDT. The only outlier is Washington at Arizona at 4:05 p.m. EDT, which means viewers in the District of Columbia and Phoenix will likely see the conclusion of the final round of the Open on FS1.

CBS will have the final round of The Masters on Nov. 15 (Week 10), but its three games will all begin after 4 p.m. EST. Last year’s final round began early due to the threat of inclement weather and was wrapped up by 3 p.m. EDT.

CBS has this season’s Super Bowl, which should give the network an advantage in ad sales. McManus, though, thinks everyone will benefit because of the increasing demand for live programming.

“I think there is going to be a lot of pent up demand. We have a terrific schedule that is very attractive to advertisers,” he said.

Gaudelli said there are a lot of unknown factors with how the rest of the sports calendar will play out due to the coronavirus pandemic.

“Normally we program against the World Series in middle to late October but we don’t know when the baseball playoffs might take place. Hopefully things will be in a more familiar state when we get to fall,” he said.