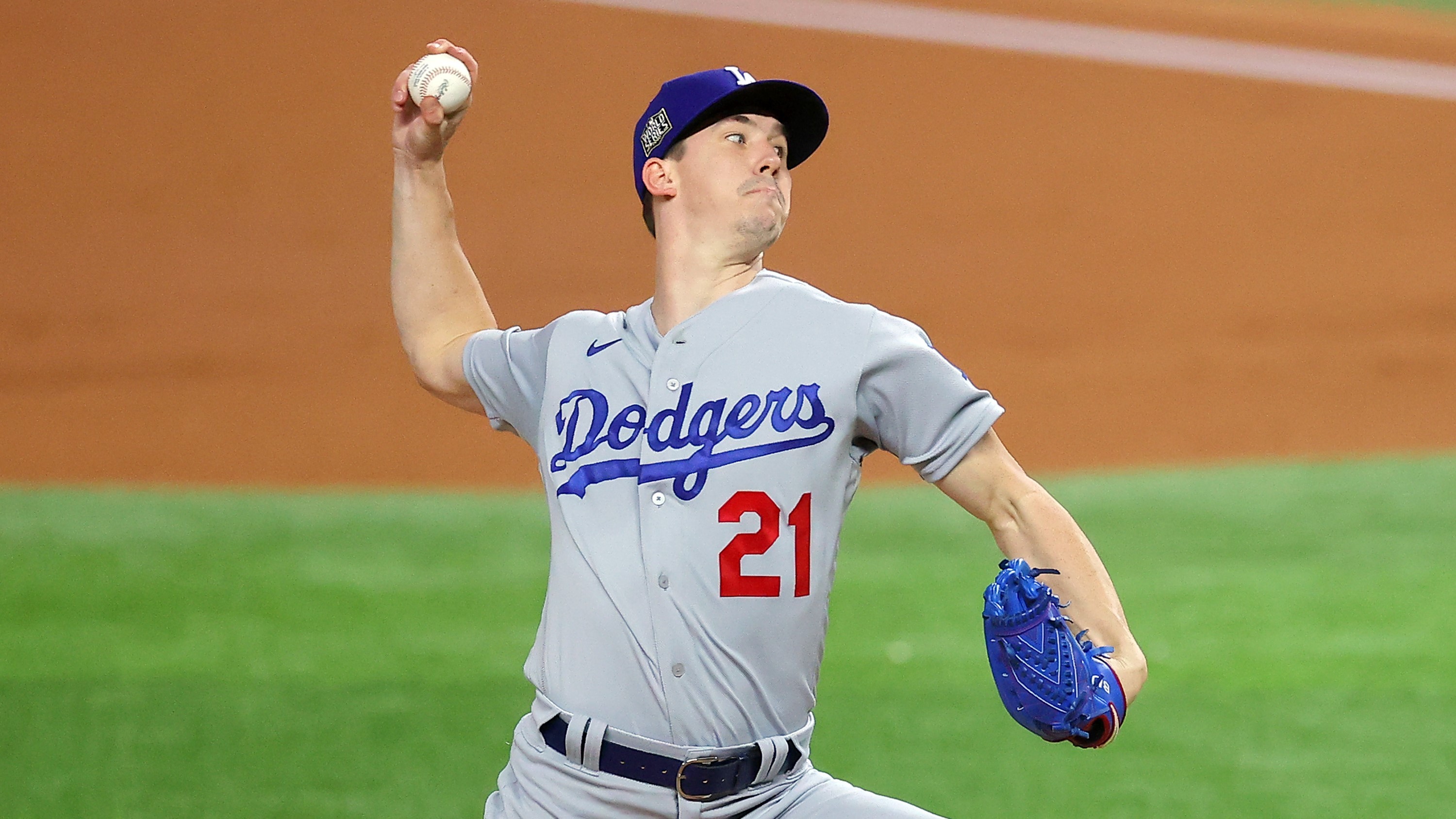 Walker Buehler of the Los Angeles Dodgers pitches in Game 3 of the MLB World Series against the Tampa Bay Rays at Globe Life Field in Arlington, Texas, October 23, 2020. /VCG

Walker Buehler pitched in the World Series like the Los Angeles Dodgers' aces of old.

Now Buehler has the Dodgers two wins from the championship that has eluded them since 1988.

Buehler struck out 10 over six innings in a pulsating performance, and Los Angeles beat the Tampa Bay Rays 6-2 on Friday night for a 2-1 World Series lead.

"Being a big-game pitcher and really succeeding on this stage, there's only a few guys currently and throughout history," Dodgers manager Dave Roberts said. "He's in some really elite company."

Justin Turner #10 of the Los Angeles Dodgers hits a double in Game 3 of the MLB World Series against the Tampa Bay Rays at Globe Life Field, October 23, 2020. /VCG

Justin Turner homered in the first inning against a surprisingly hittable Charlie Morton, who was chased in the fifth.

Austin Barnes, the Dodgers' No. 9 hitter and catcher, added a sixth-inning homer against John Curtiss. He became just the second player to drive in runs with both a homer and a sacrifice bunt in the same Series game.

"It's a cool little stat, but it's not easy to barrel the ball up against all these really good pitchers," Barnes said.

Los Angeles overwhelmed Tampa Bay in all phases, leaving the Rays’ scuffling offense with a .206 batting average and 11 runs in the Series. The Rays' .133 average (6 for 45) against Clayton Kershaw, Tony Gonsolin and Buehler is the lowest through three Series games against a team's starters since the Boston Red Sox held the Philadelphia Phillies to .129 in 1915, according to STATS.

Charlie Morton of the Tampa Bay Rays looks on in Game 3 of the MLB World Series against the Los Angeles Dodgers at Globe Life Field, October 23, 2020. /VCG

Julio Urías, a hard-throwing Mexican left-hander in a Dodgers lineage dating to Valenzuela, starts Game 4 on Saturday night, while the Rays start Ryan Yarbrough, who relieved in the first game.

Thirty-eight of 59 previous teams that won Game 3 for a 2-1 lead went on to take the title.

Justin Turner and Austin Barnes homered for the Dodgers, who have outhomered the Rays 7-4 in the Series and opponents 25-16 in the postseason. Barnes also drove in a run with a squeeze, the second player with RBIs on a bunt and home run in a Series game behind Héctor López of New York Yankees in Game 5 of 1961.

Steely-eyed like Hershiser, who won MVP honors of the 1988 Series, Buehler has supplanted Kershaw as the Dodgers' ace. He showed no indisposition from the blister on his right index finger that has bothered him.

He has allowed one run in 13 Series innings that include seven scoreless in Game 3 against Boston two years ago. He improved to 2-0 with a 1.80 ERA in four postseason starts that include the win over Atlanta in Game 6 of the NL Championship Series last weekend.

Walker Buehler of the Los Angeles Dodgers pitches in Game 3 of the MLB World Series against the Tampa Bay Rays at Globe Life Field, October 23, 2020. /VCG

"I've taken the failures that I've had and tried to learn from them a little bit," Buehler said.

The 26-year-old right-hander started 15 of 21 batters with strikes and threw strikes on 67 of 93 pitches. Buehler didn't allow a hit until Manuel Margot's one-out double in the fifth. Willy Adames then drove in Margot with another double.

Tampa Bay's only other hit off him was Austin Meadows' leadoff single in the sixth.

"You can see the fastball just pop through the zone," Rays manager Kevin Cash said. "Other than a few breaking balls here or there, it was very much a there it is, hit it approach. You totally understand and appreciate why he's so talented."

Rays batters were kept off balance by his mix of 59 four-seam fastballs, 14 knuckle-curves, 12 sliders and eight cut fastballs. He became the first pitcher in the Series with 10 or more strikeouts in six or fewer innings.

Austin Barnes #15 of the Los Angeles Dodgers hits a solo home run in Game 3 of the MLB World Series against the Tampa Bay Rays at Globe Life Field, October 23, 2020. /VCG

"That might have been the best I've ever seen him," Barnes said.

Morton, a right-hander who turns 37 on Nov. 12, had entered unbeaten in seven straight postseason decisions, one shy of Orlando Hernandez's record, including wins in five consecutive postseason starts. But he took the loss, allowing five runs and seven hits in 4 1/3 innings – more than the four runs total he gave up in his previous five postseason starts combined.

No Rays starter has finished the fifth inning in their last five Series starts since Matt Garza in Game 3 against Philadelphia in 2008. Tampa Bay repeated its pattern of a dozen years ago, losing the opener, winning the next game and dropping the third.

"I wasn't particularly sharp," Morton said. "I felt like I was able to get two strikes pretty quickly with a lot of guys and just not able to put them away." 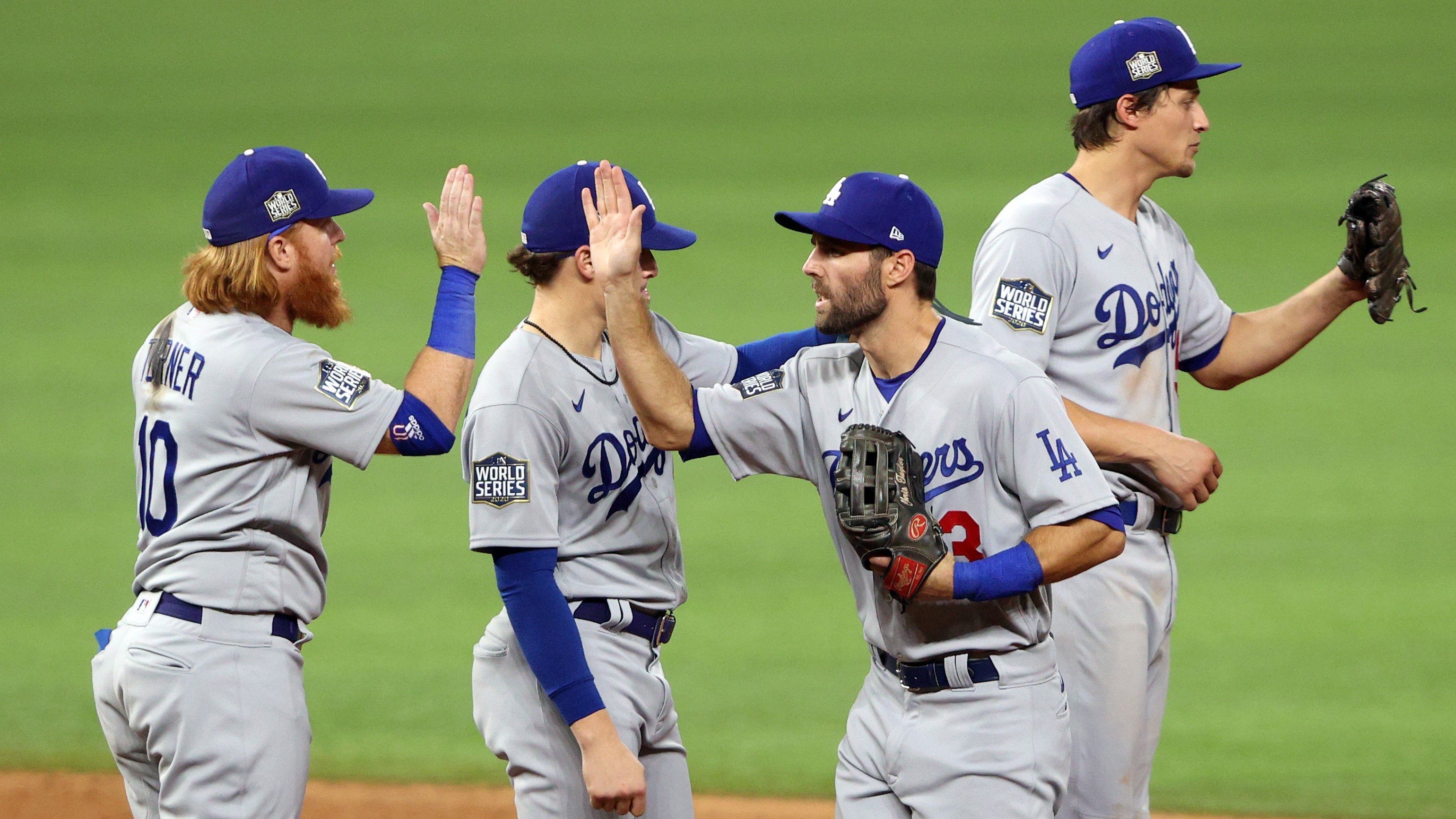 Players of the Los Angeles Dodgers celebrate after their 6-2 win over the Tampa Bay Rays in Game 3 of the MLB World Series at Globe Life Field, October 23, 2020. /VCG

Turner put the Dodgers ahead on Morton's 14th pitch, turning on a high 94.8 mph fastball with a 1-2 count and driving the ball 397 feet over the left-field wall. Turner's home run was the 11th of his postseason career over 69 games, tying the team record set by Duke Snider over 36 games with the Brooklyn and Los Angeles Dodgers from 1954-59.

Los Angeles extended the lead to 3-0 in the third when Morton hit Corey Seager on a toe with a pitch, Turner doubled and Max Muncy drove a cutter into center for a two-run single.

After singles by Cody Bellinger and Joc Pederson, Barnes drove in a run with the safety squeeze to first baseman Ji-Man Choi, the first RBI bunt in the Series since the Rays' Jason Barlett in Game 2 in 2008 and the first since for the Dodgers since Billy Cox in 1953.

Mookie Betts followed with a two-out RBI single that made it 5-0, and Barnes homered off John Curtiss in the sixth. Five of the Dodgers' first six runs scored with two outs, raising their total to nine of 18 in the Series and 50 of 87 in the postseason.

"Obviously there's two outs, but you can still build an inning not giving away at-bats," Betts said. "That's how you win a World Series."