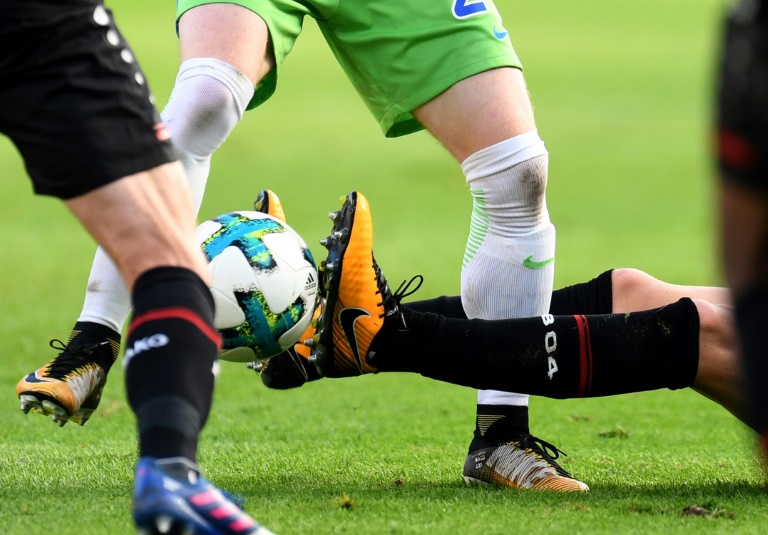 Germany's Ministry of Labour has also approved the Bundesliga's plans to resume next month. (Photo: AFP)

German football has taken another key step towards restarting the Bundesliga next month with the Ministry of Labour the latest body to reportedly approve plans.

"The safety of players, coaches and support staff can be largely ensured if the concept is fully implemented", the ministry's state secretary Bjoern Boehning told the RND media group.

The German Football League (DFL) has drawn up detailed plans for the Bundesliga to resume from May 9. These include games behind closed doors, regular testing of players and strict hygiene measures.

The DFL's plan is "sensible, reduces risks and is therefore acceptable in terms of occupational health and safety," Boehning added.

German football ground to a halt in mid-March because of the coronavirus pandemic which has so far claimed 6,115 lives in Germany.

The final go-ahead to resume must come from the government. German Chancellor Angela Merkel is set to meet with the state leaders on Thursday via a video conference.

The sports ministers of the 16 German states also approved the DFL's plans on Monday, however a spokesman has said a final decision on the Bundesliga's restart is expected next week.

Sticking points are the testing of players, which critics claim will be an extra burden on Germany's health system.

The police union has also warned that they expect locked-out fans will still congregate outside stadiums during matches, even though public gatherings are banned in Germany.

Christian Seifert, CEO of the German league, has defended the plans to restart.

"I can understand if people are worried about what kind of signal this might send out," Seifert told Frankfurt-based newspaper FAZ.

"However, with our medically-organised concept we can create a framework of which the authorities and politicians can then say 'they are doing their utmost to prevent infection' - that's all we can do."

With several clubs threatened by insolvency, Germany's top clubs are desperate for the season to finish by June 30 in order to claim millions in television money.

Watzke is convinced that "there will not be a case (of the coronavirus) in football's closed system" given the hygiene measures planned by the DFL.

Players are expected to be tested twice a week.

They would also be 'semi-quarantined', meaning they must remain at home, on club grounds or travelling to or from matches until the season is finished.