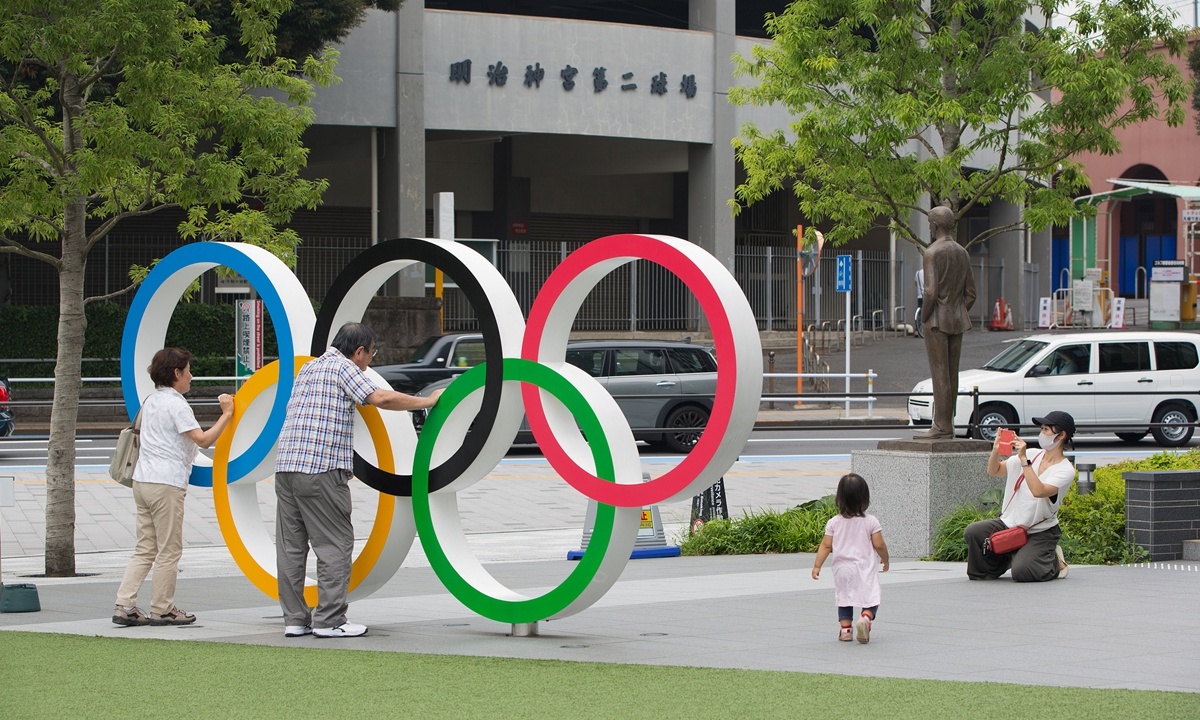 People pose next to the Olympic Rings in front of the Japan Olympic Museum in Shinjuku, Tokyo. (Photo: VCG)

Japan held subdued celebrations to mark one year to go until the postponed Tokyo 2020 Olympics on Thursday, with the coronavirus pandemic raising stark concerns about whether the Games will go ahead at all.

In Tokyo, which should have been buzzing with thousands of athletes and fans by now, if the Games had been able to start on time, organizers will hold a small event at an empty National Stadium, with the public barred following a new surge in infections.

Despite the setbacks and the downbeat mood, Japanese and Olympic officials have not wavered from the message that the Games will go on, serving as a symbol of the world's recovery from coronavirus.

"They will be the first worldwide gathering after the coronavirus," International Olympic Committee chief Thomas Bach insisted last week.

However, experts and officials - including Bach and Japanese Prime Minister Shinzo Abe - have raised the prospect of the first peace-time cancellation of the multibillion dollar Games if the pandemic is not under control by next year.

The historic decision to delay the Games in March came as the real scale of the pandemic emerged and countries imposed lockdowns that threw training into chaos and forced the cancellation of qualifiers and test events.

Since then, restrictions have been eased across much of Europe as infections and deaths from the virus decline, but elsewhere - including in the United States, Brazil and India - the virus remains rampant.

And in places where lockdowns have ended or countermeasures been eased, the virus has often come roaring back, raising questions about the feasibility of an event involving tens of thousands of people arriving from around the world.

Public sentiment in Japan also appears less than optimistic, with two polls in July showing the majority of Japanese think the Games should either be postponed again, or cancelled altogether.

Only somewhere between one quarter and a third of respondents in the two polls thought the Games should open as now scheduled on July 23, 2021.

But Japanese and Olympic officials have insisted that another delay is impossible. Even the unprecedented one-year postponement has caused a host of logistical and financial headaches.

One major obstacle has been cleared, with Tokyo 2020 confirming this month that it has secured all the venues originally contracted for the Games.

Winning agreement from stadiums that were booked up long after the original Olympic date was considered among the most difficult challenges organizers faced.

With the venues in place and available, the competition schedule has now been set, with few changes to the original calendar.

But much remains unclear, including the final cost of the delay, with organizers saying only that they plan a pared-down event that will involve as much cost-saving as possible.

Even the traditionally lavish opening and closing ceremonies may be scaled back in an attempt to keep spending under control.

And what countermeasures will be necessary to prevent the spread of the virus - assuming it has not been brought under control by next year - also remains to be decided.

In June, Tokyo Governor Yuriko Koike told AFP that the Games would be "safe and secure for athletes and fans from abroad, as well as for residents."

But detailed discussion on what measures will be needed won't begin until autumn.

And for now, just how athletes and fans will arrive in Japan is an open question, with the country's borders closed to travellers from all but a handful of nations as part of the government's coronavirus control measures.