John Carlson of the Washington Capitals celebrates after scoring a goal in the game against the Boston Bruins at the Capital One Arena, December 11, 2019. (Photos: CGTN)

Tom Wilson and Zdeno Chara traded punches, the Washington Capitals and Boston Bruins exchanged scoring chances and goals and a showdown between the NHL's top two teams more than lived up to its billing.

T. J. Oshie scored twice in under 4 minutes and John Carlson got the go-ahead goal in the third to extend Washington's longstanding domination of Boston with a 3-2 victory Wednesday night in a thrilling back-and-forth game between two hockey heavyweights.

"Both teams were flying around, going that extra step to hit someone all the time," Carlson said. "It was a fun game. It was fun to play in. Still not playoffs, but it was a nice way to get into it after the performance we had on Monday."

Each of these teams laid an egg in a loss Monday night, but the Capitals avoided the slide currently befalling the Bruins. Boston has lost four in a row with three of those defeats coming in regulation.

Zdeno Chara #33 of the Boston Bruins and Tom Wilson #43 of the Washington Capitals fight in the game at the Capital One Arena, December 11, 2019.

"We've got to keep going," Chara said. "I think it's easy to get frustrated. We realize it was obviously a good hockey team we played tonight. It was a good hockey game. We did a lot of things well. We've just got to continue to perform and keep getting better."

The Capitals have won 16 of their past 17 games against the Bruins. It's a stretch that dates to December 2014 during which Boston won only a close game last Super Bowl Sunday.

"These last couple years has been a grind," said Capitals goaltender Braden Holtby, who made 30 saves. "They have a tough team to play against. Our team usually plays better against teams like that, teams that work hard, play an honest, hard game structurally. It's fun for us to play in those games."

This one was supposed to be more fun than a typical regular-season game. These teams entered with the most points in the league, Capitals captain Alex Ovechkin trailed only David Pastrnak in the goal-scoring race, the Bruins are coming off another trip to the Stanley Cup Final, and Washington won its first title in 2018.

Alex Ovechkin #8 of the Washington Capitals skates with the puck past Charlie McAvoy #73 of the Boston Bruins in the game at the Capital One Arena, December 11, 2019.

"It's always fun to play (when) the two best teams right now in the league play against each other," Ovechkin said. "You can see how tough the game was. We play hard, they play hard. It's always nice to get two points. We knew it's not going to be easy game because they have a very good team out there. It was a challenge for us."

After all the talk about this being a mid-December measuring stick for a couple of perennial playoff contenders, the skill level matched the hype.

Pastrnak ripped a perfect shot over Braden Holtby's left shoulder midway through the first for his league-best 26th of the season. It looked like the Bruins had a two-goal lead on a Patrice Bergeron power-play goal, but Capitals coach Todd Reirden challenged for offside and video review showed Jake DeBrusk was into the zone just before the puck.

"I kind of knew it, though, as soon as I saw the replay," DeBrusk said. "It was one of those things where it had no effect on the play, but obviously it's not a goal." 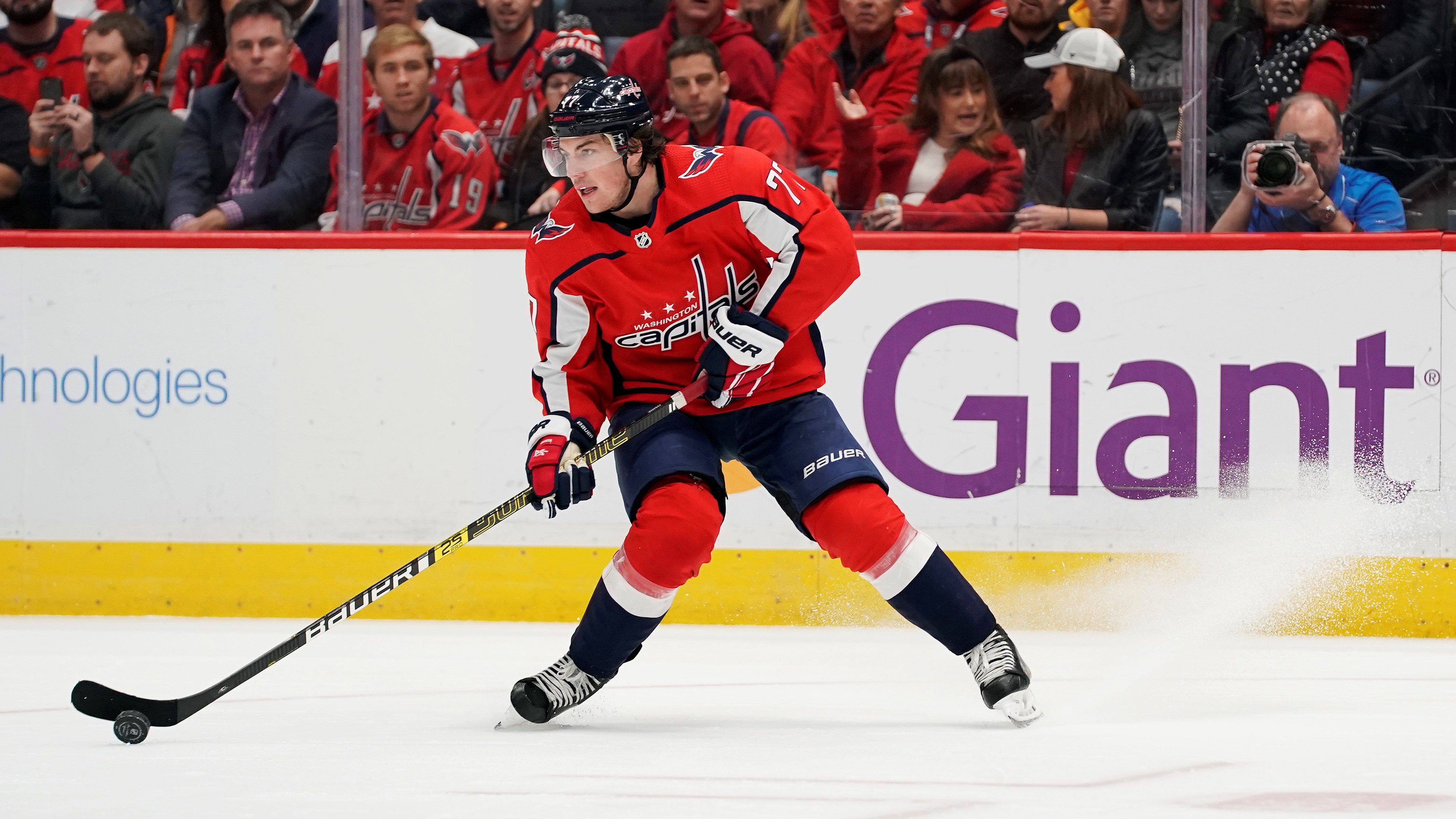 T.J. Oshie #77 of the Washington Capitals skates with the puck in the game against the Boston Bruins at the Capital One Arena, December 11, 2019.

Oshie, who had just one goal in his previous 10 games, made the most of nothing but empty ice around him to score off his own rebound on the power play early in the second. Soon after, he turned Bruins defenseman Connor Clifton into a human pylon and beat Jaroslav Halak with a backhander for a highlight-reel goal.

"It felt pretty lucky for the puck to squeak through there," Oshie said. "You just try to put it upstairs with a couple sticks on you, so happy it went in."

Kuraly and Carlson traded goals, and these two rivals traded shoves and unpleasantries plenty before the final buzzer. They meet again two days before Christmas.