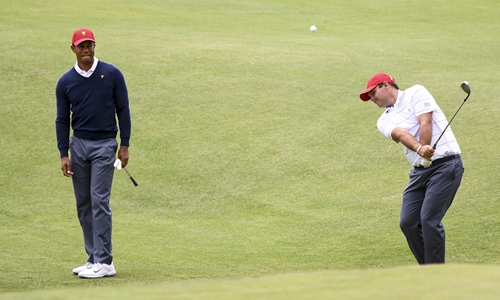 Captain of the US team Tiger Woods watches teammate Patrick Reed play during a practice round ahead of the Presidents Cup golf tournament starting on Thursday, in Melbourne, Australia on Tuesday. (Photo: AFP)

US captain Tiger Woods defended Presidents Cup teammate Patrick Reed as "a great kid" Tuesday after he was penalized for breaking the rules in the ­Bahamas, while attempting to draw a line under the controversy.

Former US Masters champion Reed was given a two-shot penalty for improving his lie in a waste bunker during the third round of the Hero World Challenge on Friday.

His actions were blasted by two of the International side preparing to face the Woods-led United States in the team matchplay showdown at Royal Melbourne this week, potentially opening the door for some barracking by Australian fans.

Cameron Smith told reporters at the weekend he had "no sympathy for anyone that cheats" while Marc Leishman called his behavior "pretty ordinary."

Woods was keen to move on from the row when pressed in Melbourne, admitting the two discussed the matter on the long plane trip to Australia from the ­Bahamas but it was now over.

"It was not a lengthy conversation. Pat and I are very good friends. We kept it short and brief, to the point," said Woods, who is the first playing captain at the Presidents Cup since American Hale Irwin in 1994.

"The rules official gave him two shots. He finished at 16-under, two back of Henrik [Stenson], and now we're on to this week."

Reed acknowledged that he moved sand with both practice swings and therefore violated the rules, but denied Tuesday he was a cheat.

Despite the prospect of a volatile reception in Melbourne, Woods insisted Reed would be "fine" when the tournament begins on Thursday.

"Pat is a great kid. He's handled a tough upbringing well, and I just think that he's one of our best team players and is one of the reasons why all of the guys wanted him on the team," Woods said.

International team captain Ernie Els said he had no problem with Smith and Leishman being outspoken on Reed, keen to take any edge they can into the tournament.

"Well, I think it's only natural. These guys are competitors. Obviously they didn't like what they saw," he said.

But Els added, "Like Tiger, we're moving on; we've got a Cup to play for.

"We're getting ready to play the Presidents Cup. There's nothing more to be said."

The International team will need to use everything in their arsenal to unsettle Woods' star-studded team, who are the heavy favourites to win.

They have clinched all but one edition of the Presidents Cup in its 25-year history.

The exception was at Royal Melbourne in 1998, where a young Woods played.

He admitted the team then was not properly prepared, in contrast to now.

"I think our strength is that we are a very deep team. The guys have played well this entire year, and you know, we had 11 out of 12 guys play last week," said Woods.

"So it was nice for them to shake off some rust. Get a feel for things.

"Today is an important day for us to just walk and to stretch our legs a bit," he added.

"Getting in yesterday after a 26-hour ride in a luxurious tin can, it's nice to ­actually get out there and feel some fresh air."