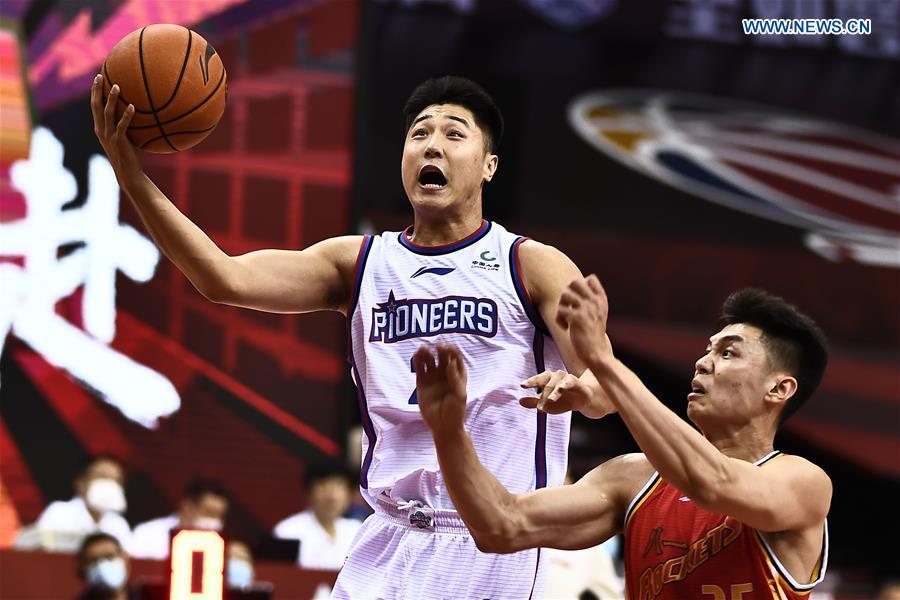 He Siyu (L) of Tianjin Pioneers goes up for a basket during a match between Tianjin Pioneers and Bayi Rockets at the 2019-2020 Chinese Basketball Association (CBA) league in Qingdao, east China's Shandong Province, July 19, 2020. (Xinhua/Guo Xulei)

With more games to play and less minutes allowed for foreigners, the Chinese Basketball Association is ushering in a new era dedicated to nurturing homegrown talent.

Just two months after finishing a coronavirus-disrupted season behind closed doors, the CBA is ready to rumble again, tipping off a new campaign on Saturday at two arenas in Zhuji, Zhejiang province.

Citing continuing vigilance against COVID-19, the CBA said the league will continue to operate inside bio-secure bubbles for at least the first 12 regular-season rounds in Zhuji.

Each team will play 56 games in an extended regular season, up from 46 last year, before the top 12 clubs advance to the playoffs in May, making the 2020-21 campaign the longest season in the CBA's 26-year history at over six months.

If deemed safe enough, the league will resume the season with its usual home-and-away format and eventually allow fans to return to stadiums, according to CBA president Yao Ming.

"Thanks to the collective efforts that made last season's restart possible in a challenging time, we are able to proceed with the opening of our 26th season to continue bringing the excitement of the game to the fans," Yao said at the launch of the new campaign on Monday.

"Still, we need to stay vigilant by continuing to play inside the bubble to guarantee the health and safety of everybody involved. We are confident though of reopening stadiums to fans when possible."

Due to China's temporary entry ban on foreign nationals imposed in March to control imported coronavirus infections, most CBA clubs are expected to initially play without their full foreign rosters－capped at four players each.

According to the league, the Liaoning Leopards' OJ Mayo was the only registered foreigner by Tuesday, while some import players who stayed in China throughout the offseason, including American Sonny Weems of the defending champion Guangdong Southern Tigers, will be registered soon.

Should the country lift the entry ban midway through the season, the league will immediately open a 30-day buffer period for teams to sign overseas-based foreigners and bring them back. Any newcomers halfway should be tested and quarantined for 14 days before being allowed to compete.

In a bid to give homegrown talents more minutes, especially in clutch time, teams can play only one import for as long as two quarters against an all-Chinese opponent; a foreigner can be on the court for all four quarters against a rival that also has an import at its disposal.

Assuming all clubs bring back their imports in the midseason window, the four lowest-ranked teams from last season will be allowed to play two foreigners at the same time for one quarter (except for the fourth period).

In a league long dominated by ex-NBA playmakers and prolific scorers, it's hoped the new rules will facilitate the growth of Chinese players, as demonstrated last term by the maturing of some young talents who rose to prominence.

"The policy will continue to provide an ideal environment for our own young players to grow with more time to play and more opportunities to make tough decisions on the court," said Zhang Xiong, the league's chief executive.

Since former NBA All-Star Yao took the leadership reins in early 2017, the CBA has been endeavoring to strike a balance between luring big-name imports and nursing domestic talents.

The Chinese national team's 24th-place finish at last year's home FIBA World Cup, where it lost Asia's only direct berth to the Tokyo Olympics to Iran, prompted the league to tackle the reliance on foreigners－both athletically and in a marketing sense.

Other changes this season include the introduction of a salary cap, cash fines for technical and unsportsmanlike fouls, as well as a stricter evaluation of referees.

A team's total salary for all domestic players should stay between 20 and 44 million yuan (about $3-6.6 million), while the spending on as many as four foreign players' salaries should not exceed $7 million.

"We are confident in the system," Zhang Chi, director of the CBA's player development department, said earlier last month.

"It's an agreement by our clubs and investors. We are expecting to help them get reasonable control of the spending. Besides that, all of us want a more balanced league. Under the cap, the teams are encouraged to pay more attention to their youth training system instead of buying players."