SPORTS CBA highlights on Jun. 22: When you can't make threes, defend to win

CBA highlights on Jun. 22: When you can't make threes, defend to win 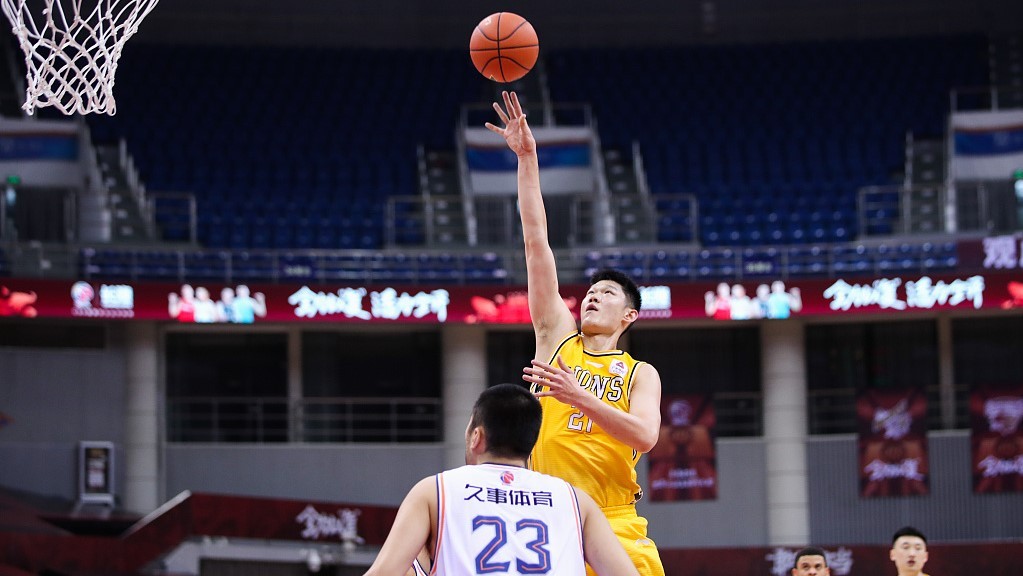 Hu Jinqiu #21 of the Zhejiang Lions shoots the ball in the game against the Shanghai Sharks in Qingdao of east China's Shandong Province, June 22, 2020. (Photos: VCG)

The Zhejian Lions continued to claim their second victory in a row as they defeated the Shanghai Sharks 95-90 in Qingdao, east China's Shandong Province. Zhejiang's Hu Jinqiu dropped a game-high 38 points and 11 rebounds. The other four of his starting teammates all scored double-digits. Su Ruoyu also got a double-double of 10+12.

On Shanghai's side, Ray McCallum missed a triple double by one assist as he put down 29 points, 10 rebounds and nine assists. "LeBron James from Jiaozuo," Li Gen pulled himself out of last game's struggling to get 12 points and six rebounds. Luo Xudong and Zhang Chunjun scored 11 and 12 points respectively. 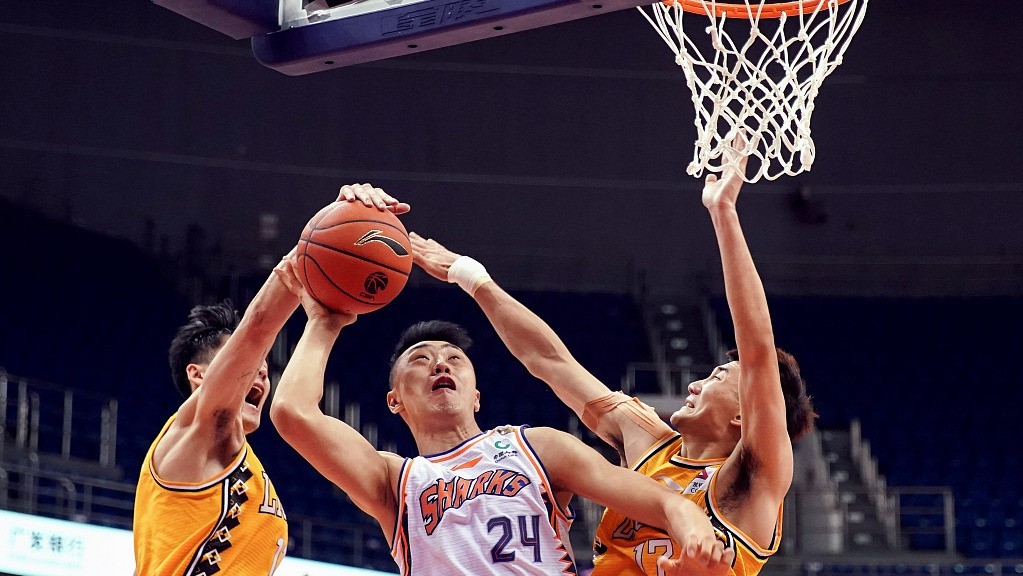 Ju Mingxin #24 of the Shanghai Sharks is denied by two defenders of the Zhejiang Lions in the game in Qingdao, June 22, 2020.

Zhejiang have the best defensive team in the CBA this season and they managed to limit Shanghai's scoring to 19 points in the first quarter. Meanwhile, they also forced 11 turnovers out of Shanghai's players.

However, having realized Zhejiang's shooting problem, Shanghai immediately copied the opponents' 2-3 zone defense to close in heavily under the rim. As Zhejiang kept missing their shots from the perimeter, Shanghai began to find their touch via waves of fast breaks. In the second quarter alone, they returned Zhejiang a 32-17. 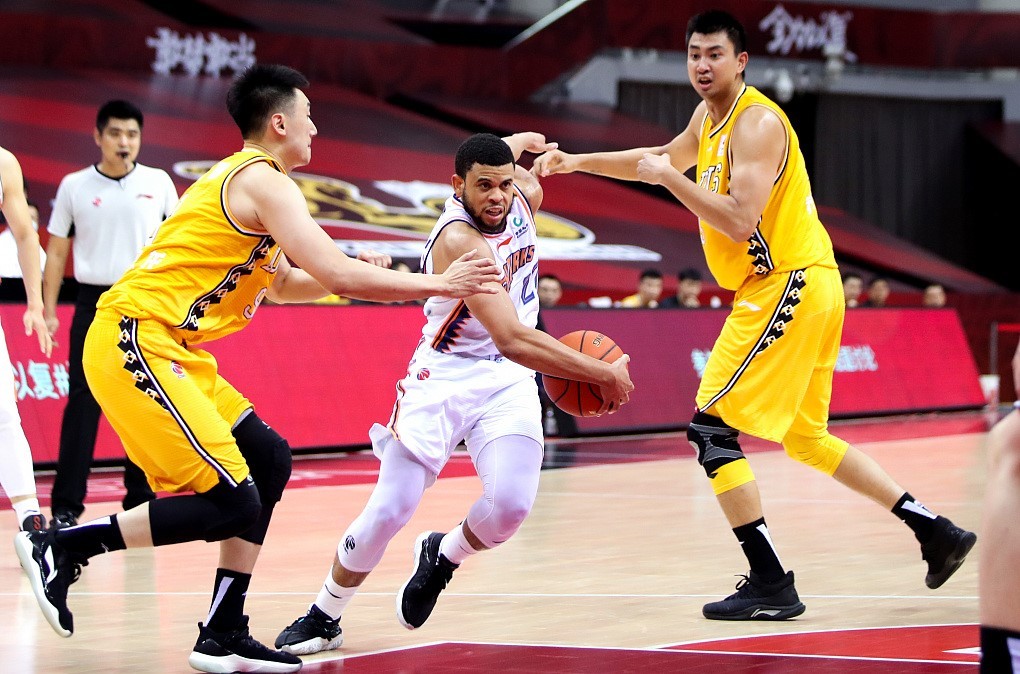 Ray McCollum (C) of the Shanghai Sharks tries to break through the defense of the Zhejiang Lions in the game in Qingdao, June 22, 2020.

Zhejiang's shooters still could not find the target in the third quarter but fortunately, they found their defense again. Though they only got 14 points this quarter (fewer than Q2), Shanghai scored no more than 17 points.

The first five minutes of the fourth quarter were nothing but torture for both teams. The game was filled with physical clashes, fouls and bricks. However, compared with Shanghai, Zhejiang apparently were more used to such pace. Slowly but surely, they were wiping the tail point by point until the real game-changer happened. 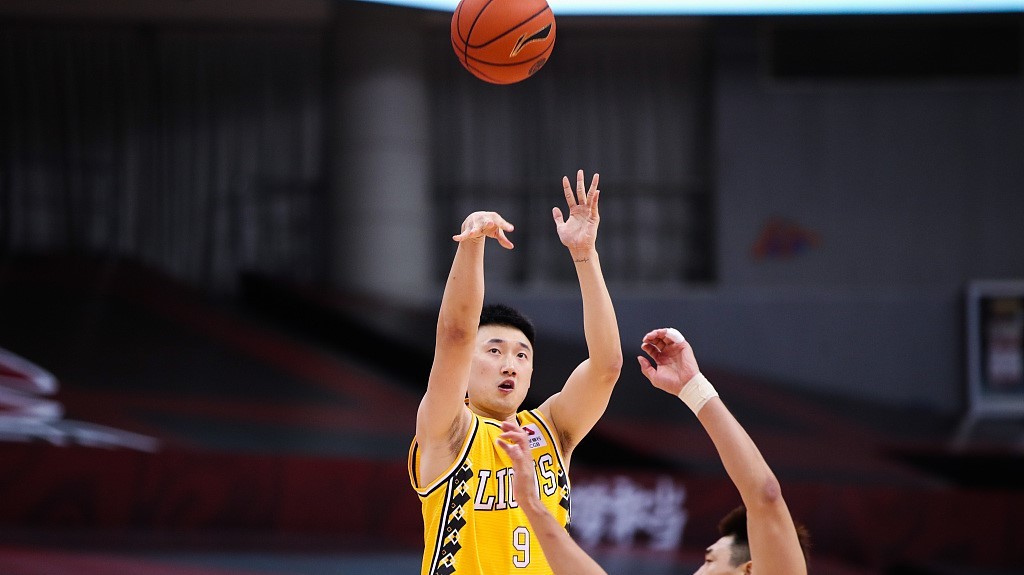 Li Jinglong #9 of the Zhejiang Lions shoots the ball in the game against the Shanghai Sharks in Qingdao, June 22, 2020.

After Liu Zheng made a free throw to narrow the score difference down to 75-71, Zhejiang suddenly went all-court on Shanghai. Unprepared Shanghai lost the ball twice and watched the opponents launch a 6-0 run in one minute to gain the lead 77-75. Since then, Zhejiang had the game in their solid control and everything began to look good for them. As Li Jinglong made the team's third 3-pointer, Zhejiang sealed their second straight win since season restarting. 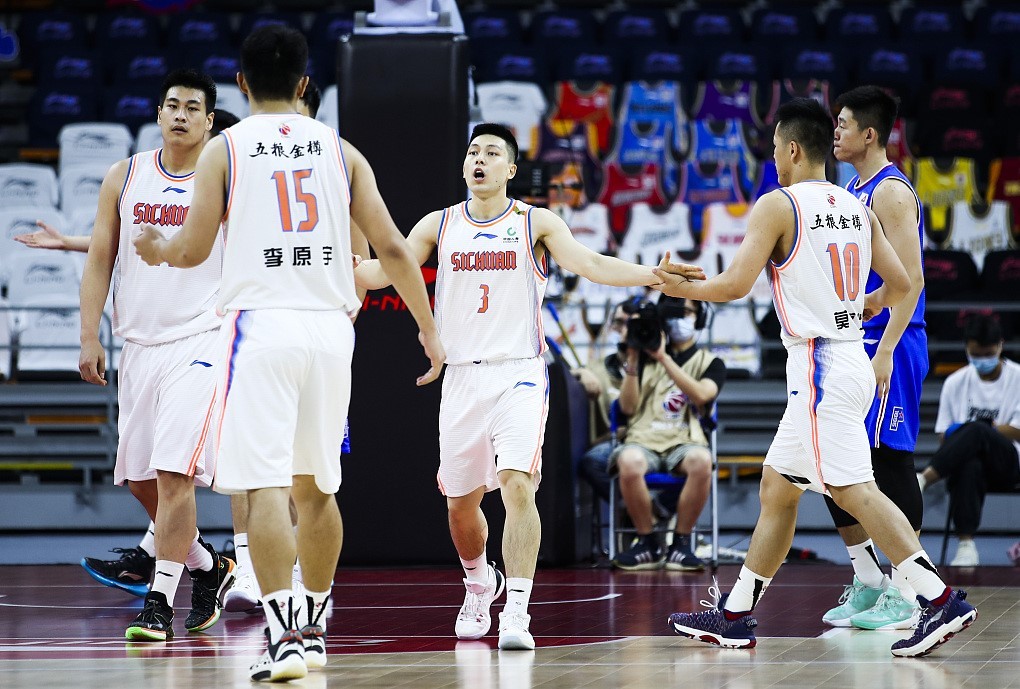 Yuan Tangwen of the Sichuan Blue Whales communicates with his teammates in the game against the Tianjin Pioneers in Dongguan, south China's Guangdong Province, June 22, 2020.

In a back-to-back game between two all-Chinese teams, the Sichuan Blue Whales walked over the Tianjin Pioneers 101-72. Sichuan's Yuan Tangwen played all 48 minutes on the court and delivered 16 assists. Under his leadership, both Chen Chen and Hou Tianyi scored 20+points and 10+rebounds on the court.

Though fatigue was supposed to be equal to both sides, Tianjin apparently suffered more from it as they never reached even 20 in scoring in the first three quarters. Moreover, the team's disadvantage inside basically ruined all of their defensive efforts. When you trailed 54-34 in rebounds, it would take miraculous shooting performance to win, but Tianjin's 30-percent FG rate was definitely not good enough.

The good news for Tianjin is that they will have the whole Tuesday to recover. 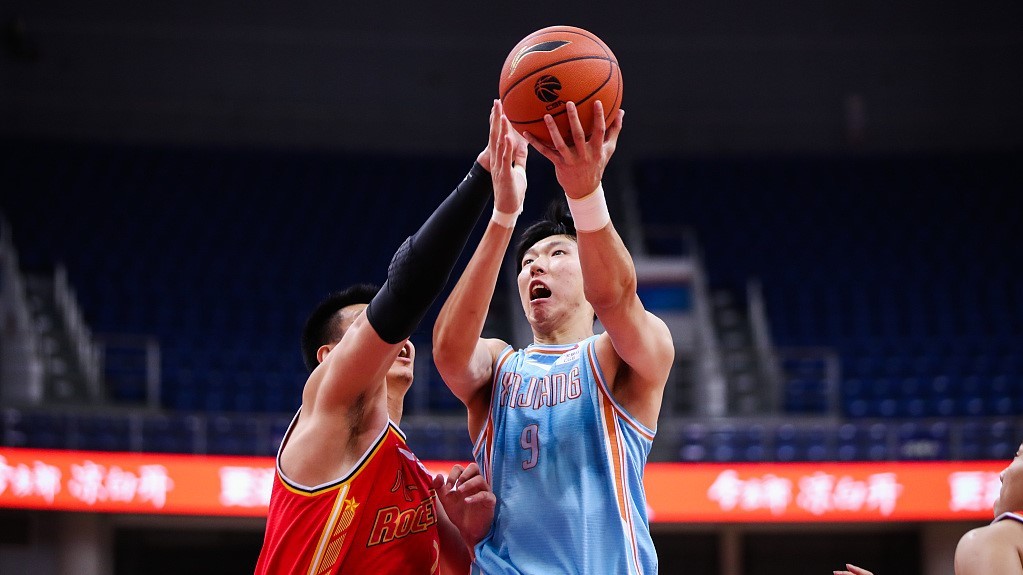 Zhou Qi #9 of the Xinjiang Flying Tigers drives towards the rim in the game against the Bayi Rockets in Qingdao, June 22, 2020.

The Xinjiang Flying Tigers achieved another big win of 102-82 over the Bayi Rockets. Both sides went with all-Chinese franchises and Xinjiang's advantage was in every aspect from scoring, rebounds, assists to 3-pointers, blocks and field goal rate.

Zhou Qi again became the most important pillar of Xinjiang, not just with his 21 points, 17 rebounds, but also for his key role in both offense and defense. Zhou's size, athleticism and 3-6 3-pointer shooting forced the opponents to pay extra attention to him no matter if he had the ball or not. In defense, Zhou standing in the paint was distracting enough for Bayi's players. 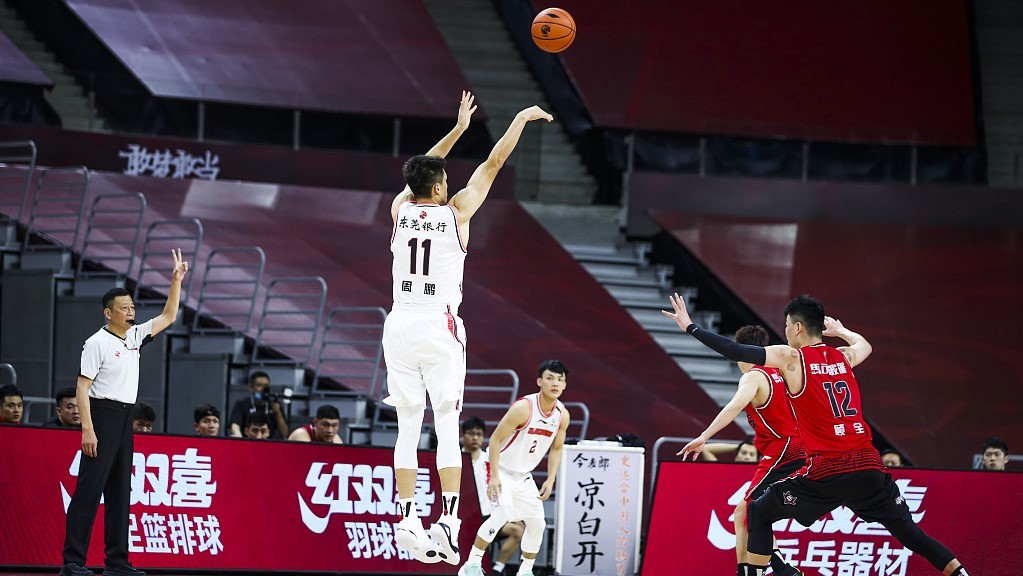 Zhou Peng #11 of the Guangdong Southern Tigers shoots the ball in the game against the Shenzhen Aviators in Dongguan, June 22, 2020.

Yi Jianlian's absence shows how intimidating the Southern Tigers are

CBA's best player, 32-year-old Yi Jianlian sat out the second game of the Guangdong Southern Tigers but that did not keep the team from winning as they smashed the Shenzhen Aviators 139-104.

Guangdong's head coach Du Feng gave more time to young players in Monday's game and they responded to his trust with eight players scoring double-digits and a big win. Guangdong scored over 30 points in each of the four quarters and shot down 44 in Q2. Though the game was long gone from the third quarter, Du Feng still ordered his players to go tough on the court, especially on defense. As a result, Guangdong committed a total of 35 fouls in the game.

Perhaps it's still too early to say this, but so far, no team seems able to challenge Guangdong on their way to their 10th championship. 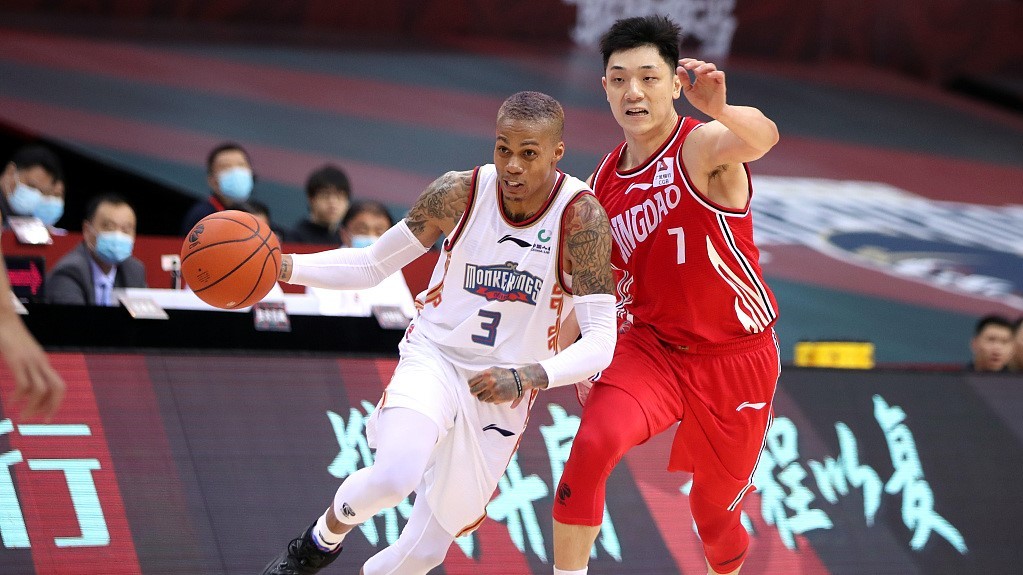 Joesph Young #3 of the Nanjing Monekey Kings penetrates in the game against the Qingdao Eagles in Qingdao, June 22, 2020.

The Nanjing Monkey Kings are among the few CBA teams that managed to keep two foreign players in their franchise after the season restarted. However, that luck failed to bring them victory, as they were defeated by the Qingdao Eagles 103-95, suffering their second straight loss.

Fairly speaking, Joseph Young did everything he could offensively for Nanjing, with 31 points coming from six 3-pointers and nine free throws. However, his four teammates in the starting lineup again held him back by getting only 19 points. Nanjing's other foreign aid, legendary Iranian center Hamed Haddadi, only had six points and eight rebounds, thanks to the team's lack of qualified orchestrator. 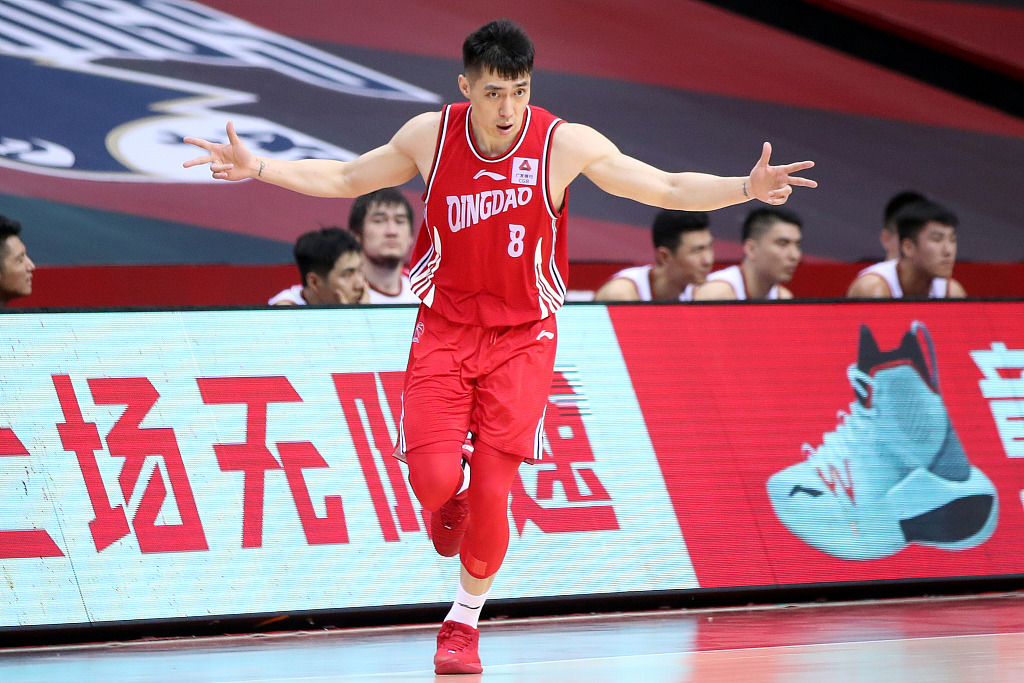 Zhao Tailong of the Qingdao Eagles celebrates in the game against the Nanjing Monekey Kings in Qingdao, June 22, 2020.

Qingdao's biggest heroes for the win were Zhao Tailong and Zhang Chiyu, who dropped 22 and 23 points, respectively. Zhao Dapeng and Jiao Hailong also reached double-digit points. Having trailed by five points in the third quarter, Qingdao managed to reverse the situation with a 16-0 run in the fourth quarter. 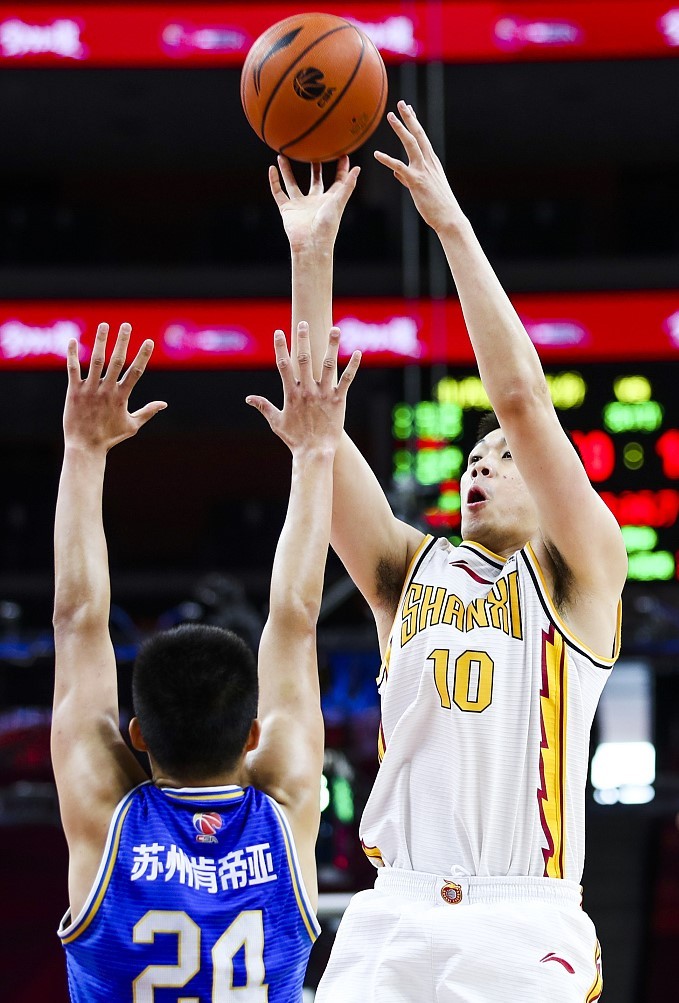 Ren Junwei #10 of the Shanxi Loongs shoots the ball in the game against the Jiangsu Dragons in Dongguan, June 22, 2020.

The Shanxi Loongs achieved a tough win over the Jiangsu Dragons 106-102 in a comeback game on Monday. Ren Junwei contributed the most to Shanxi's win not only via his season-high 33 points, but also the last two valuable free throws he made to seal the game.

Jiangsu's American guard Antonio Blakeney put down the court's highest 35 points. Wu Guanxi got 28 points and 13 rebounds, but he failed to take any shot in the last quarter. 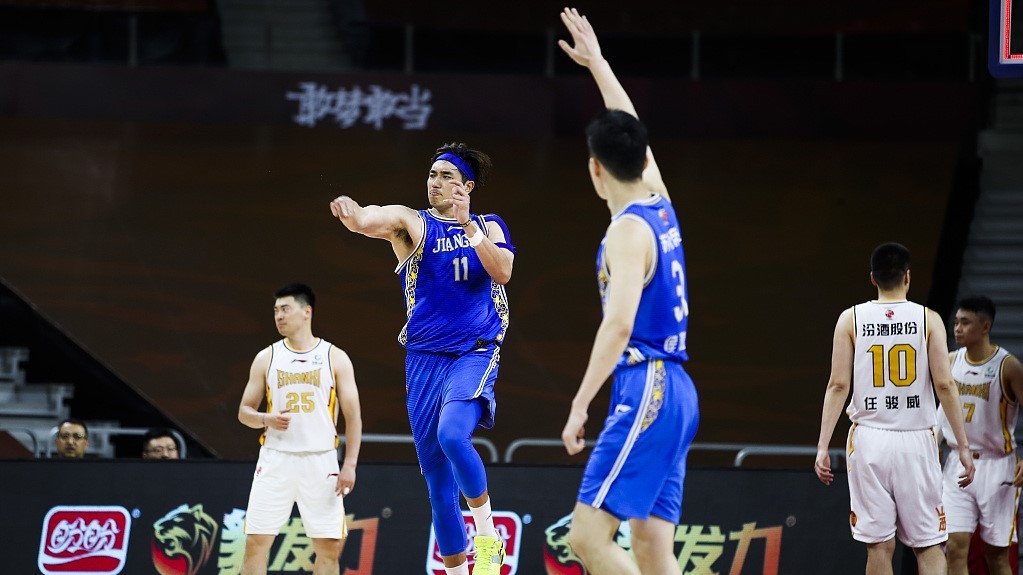 Wu Guanxi #11 of the Jiangsu Dragons celebrates in the game against the Shanxi Loongs in Dongguan, June 22, 2020.

Shanxi took the lead in Q1, but lost it in Q2 to Jiangsu who put up a 2-1-2 zone defense in Q3 to test Shanxi's 3-point shot. Without effective response in offense, Shanxi watched the opponents take their lead and zone defense into the fourth quarter. Nonetheless, the team managed to find their solution in the mid-range and started to narrow down the score difference.

Meanwhile, thanks to their tougher game, Shanxi made Jiangsu's rebounding advantage disappear, having grabbed 11 offensive rebounds in the first three quarters. Jiangsu failed to get any in Q4. In the last minute, Blakeney scored Jiangsu's last point via a free throw before Tian Guisen gained the lead back 104-102 for Shanxi with a 3-pointer. Then Shanxi continued to reap offensive rebounds while Ren Junwei drew a foul from Zhao Shuaizhou, earning and making the two game-winning free throws.