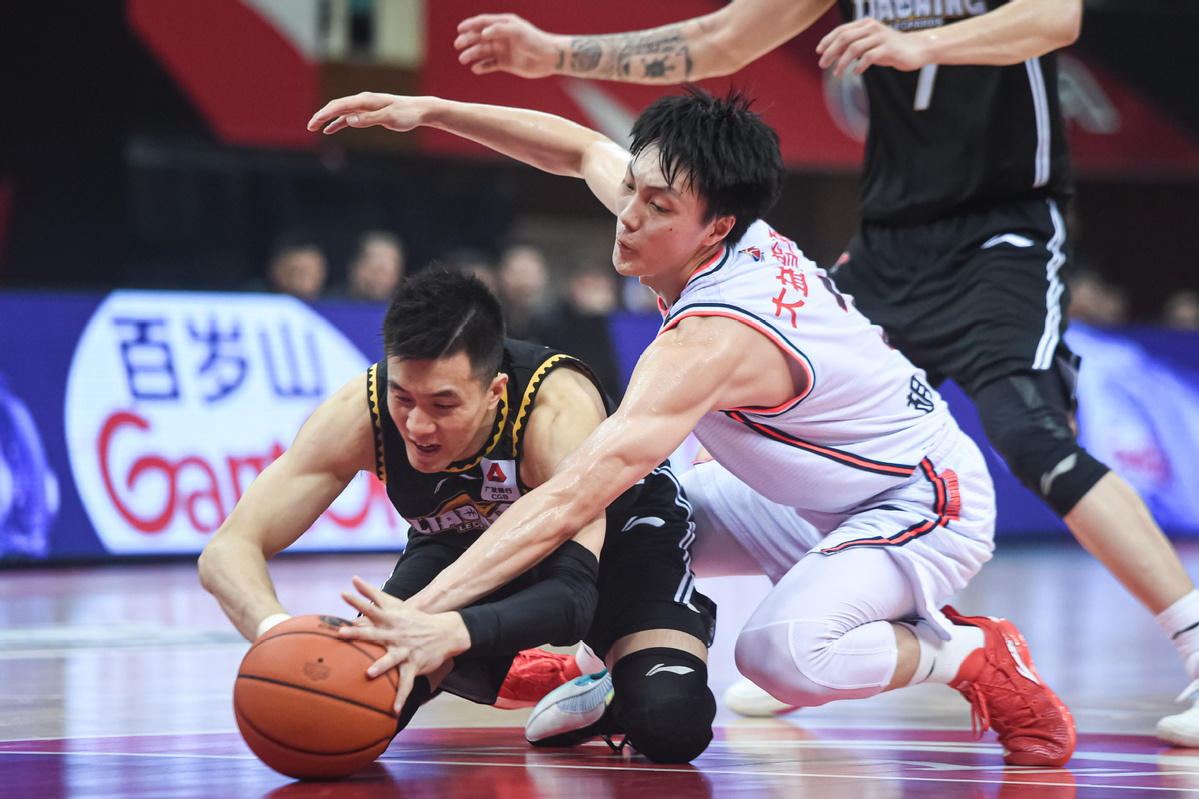 On and off the court, the 2020-21 Chinese Basketball Association season has been the perfect antidote to the national team's likely Olympic absence.

The continuing rise of young domestic talent and a fierce playoff battle gave fans plenty to cheer about, while league officials can point to a spike in social media followers as evidence that Team China's struggles on the international stage have not been too damaging for the sport's reputation with the public.

Considering all these strides have been made with players locked inside a bio-secure bubble in Zhuji, Zhejiang province for seven months－and without spectators for most of the campaign－the CBA has good reason to argue this has been the most intriguing season in the league's 26-year history.

With experience and depth on their side, the Guangdong Southern Tigers outplayed the Liaoning Leopards to win a hard-fought finals series 2-1. The triumph secured a coveted three-peat for Guangdong and was a record-extending 11th championship trophy for the southern franchise.

Since October's tip-off, the league has garnered 6 million new followers across five major social media platforms, including Weibo and Douyin. Topics related to the finals went viral on Weibo to accumulate 1.24 billion views over five days, according to official league data.

Those figures prove the game remains popular even with the men's national team almost certain to miss out on qualification for this summer's delayed Tokyo Olympics.

"It's really a unique season that left us unforgettable memories,"CBA president Yao Ming said in a China Central Television program aired on Monday.

"So much effort was made with so many people staying together, isolated from their family and pulling through it over seven months ... Hopefully, we can rebuild the confidence for whatever challenges lie ahead in the future."

After failing to win Asia's only direct berth to Tokyo at the 2019 FIBA World Cup at home, Team China is now facing long odds to overcome five much-higher ranked opponents, including Greece and Canada, to win the solitary ticket up for grabs to the Games at an Olympic qualifying tournament, which begins on June 23 in Victoria, Canada.

As head coach of both Guangdong and the national squad, Du Feng is embracing the international challenge as more of an opportunity for young guns to maintain their upward curve.

"This past season some of our young players have made great strides, facing not just confrontations on the court, but also the long, grueling test of their professionalism off the court," said Du, a 39-year-old former national team forward who helped Guangdong win its first seven league titles as a player from 2004-11.

"They did it to stay disciplined and mentally sharp throughout seven months locked up between the hotel and arenas, and they have convinced me that the franchise will stay strong in the future."

A standout young performer in the finals, 23-year-old Guangdong point guard Hu Mingxuan was named MVP of the finals after averaging 13.7 points, 2.7 assists and 3.3 steals over the three games to help the Southern Tigers roar to victory.

Together with 21-year-old Xu Jie and 25-year-old Zhao Rui, Hu has been part of a formidable Guangdong backcourt trio who have compensated for the loss of American import Marshon Brooks and domestic backbone Yi Jianlian, who were both sidelined by Achilles tendon ruptures.

"Congrats to our little buddy on becoming the fifth local player in Guangdong's history to win the FMVP award! Well deserved!" Yi posted on Weibo. "Your improvement has been obvious to all. Just keep working hard and stay committed to the mission."

Although losing to Guangdong in the finals for a second consecutive year, Liaoning could draw plenty of encouragement for next term thanks to the performances of its own young core－guard Guo Ailun and forward Zhang Zhenlin.

Guo, who was called up to the national team in 2010 at just 16, has silenced critics who accused him of lacking maturity by averaging 23.1 points, four rebounds and eight assists－figures that saw him rival eventual winner Wu Qian of the Zhejiang Golden Bulls for the regular-season MVP award.

As the Rookie of the Year, Zhang's versatility covering both ends of the floor as a stretch defender and rim attacker has instantly thrust him into the conversation about being a future national team leader. He averaged 17 points and seven rebounds in his finals debut.

"To lose for the second time in a row is painful," said Liaoning head coach Yang Ming after the final game.

"Yet we shall hold our heads up leaving the arena knowing that our young guys have had some valuable lessons to grow and return stronger next year."

In a bid to give homegrown talents more minutes, especially in clutch time, the CBA further limited the use of foreign players this term, allowing teams to play only one import for all four quarters－down from two for half a game－against a rival that also has imports at its disposal.

A league once dominated by ex-NBA players on the offensive end, the CBA has seen local players rise to leadership roles in multiple title-contending franchises, such as semifinalists the Shangdong Heroes and the Golden Bulls. The consensus is that the extra time on court has helped hone the youngsters' scoring efficiency and playmaking abilities, raising hopes for an upturn in the national team's fortunes.

Yao, who led Team China to its Olympic-best eighth-place finish at the 2008 Beijing Games, reckons the success of the league's player development program bodes well for the future.

"Thanks to our clubs' increasing attention and investment in the talent system and youth training, we've had a new generation of quality young players emerge," said Yao, a former NBA All-Star who was elected CBA chief in 2017.

"Our efforts to adjust the foreign policy and to extend the season are paying off. Our league will remain vibrant as long as we keep testing and developing our young players."