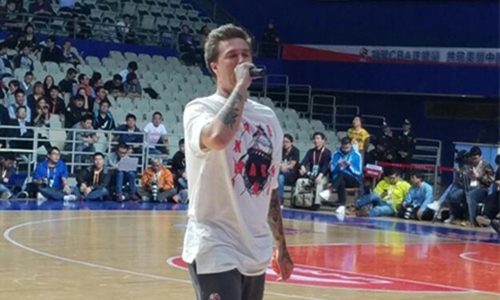 The Chinese Basketball Association (CBA)’s Shanghai Sharks club announced on Thursday that it would end business cooperation with its British MC James Lawman due to his controversial comments on his quarantine in Shanghai.

Lawman complained in a Sina Weibo post on Wednesday that the hotel he and his daughter were sent to for a temporary quarantine after returning from the UK was shabby and dirty, saying his quarantine was like being “in jail.”

The hotel had only offered them instant noodles and bottled mineral water, he said. “I wonder whether I have mistakenly flown to North Korea,” he wrote in Chinese.

The Shanghai Sharks club told the Global Times on Friday that as Lawman is a public figure, his quarantine remarks on social media were inappropriate.

"We firmly support China’s novel coronavirus (COVID-19) control policies and Shanghai’s measures in the fight against the pandemic," said a media staffer with the club surnamed Hou.

Wu Yijun, a Shanghai-based basketball fan who has been watching CBA games for over 15 years, said he supported the club’s decision to fire Lawman.

"Shanghai had informed both locals and expats of its virus prevention policies," he said. "Lawman has worked and lived in this city for years, he speaks Chinese and even speaks in the Shanghai dialect. He couldn’t have been ignorant of the policies."

Lawman also complained in his Wednesday post that the flight he took to Shanghai on Tuesday had not provided passengers with hot meals, neglecting the fact that many international airlines have suspended meal services to reduce the risk of virus transmission amid the pandemic.

The post has sparked outrage among Chinese netizens, particularly among basketball enthusiasts.

"As a British man who rushed to Shanghai when the UK’s epidemic situation is getting serious, you have no reason to complain about the city’s efforts (to prevent the virus spread),” Weibo user barcelona-rover commented. “Just go back to your home country if you’re not satisfied with them."

According to an online poll released by the sports channel under video platform Migu, which asked people whether they supported Lawman’s dismissal or not, 38,000 of the 39,000 people who had participated by 3:30 pm on Friday voted in support of the decision.

Lawman has apologized on social media and deleted his controversial post.

"I apologize for the post that I shouldn’t have made," he wrote on Weibo on Thursday. "I would like to thank the staff who gave us food and sent us home [after the temporary hotel quarantine], and to thank everyone who is fighting against the virus on the frontline."

Lawman has not yet replied to the Global Times’ request for comment.

Lawman’s improper remarks have infuriated citizens during a time when China is entering the key stage of preventing imported infections, said Tang Jianjun, a sports media scholar at the Shanghai University of Sport.

"Chinese citizens are quite sensitive to people who come or return to the country at present," Tang told the Global Times on Friday.

As an influential voice for Chinese basketball fans, Lawman should have attached importance to the city’s epidemic-control rules and respected the mood of locals, Tang added.