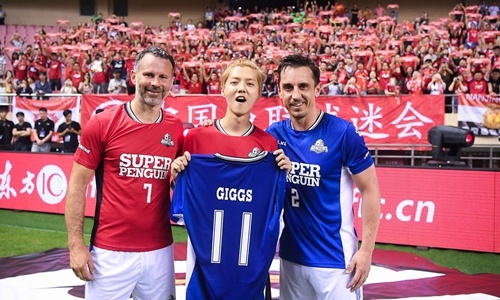 Football fandom is a uniting thing, and not just for fans of teams called United. There is something very levelling about supporting the same team, a shared bond that cuts through what other differences you might have in circumstance, belief or location.

The same is true for us mere mortals and for those who are famous in their chosen field. If you support the same team then you likely kick every ball in the same way and feel every win or loss just as emphatically, whether you are in the Hollywood Hills, a Beijing hutong or in the stands at the game.

That being said, it is also funny to learn who you have such a shared bond with, because it really does cross every cultural divide you can conceive and perhaps nowhere more so than in the form of the celebrity fan.

Liam and Noel Gallagher may no longer get on and the rumors of an Oasis reunion concert get quieter by the day, but the brothers will always have their shared love of Manchester City and their memories of playing a series of concerts at the club's Maine Road ground.

Across Manchester, Mick Hucknall, the singer of Simply Red, made the kind of music that many footballers professed to be their favorite in interviews in the 1980s and 1990s, but there was only one team he wanted to watch: Manchester United. The name of his group was even said to be inspired by the team - similar to fashion designer Wayne Hemingway's Red or Dead brand being so named.

They are not the most famous Manchester United fans in the world - though Hucknall was among the most visible at the ground for a long time - but they are proof that the team you support can have a profound effect.

Sticking with Mancheseter United, because they claim to have approaching 700 million fans worldwide and 108 million of them in China, there are bound to be a few more famous faces.

Chinese celebrity Lu Han made his first visit to Old Trafford last year and the club parlayed that into views on China's social media platforms. Lu also has the most viewed Weibo post ever - his "Ten years a fan, Lifelong a Red Devil!" comment from 2015 having more than 100 million comments on the site and earning him a place in the Guinness Book of World Records.

Another world record holder is a fan of the club and he wanted to get closer to the action than Lu's stadium tour. The fastest man on the planet, Jamaican sprint king Usain Bolt, has long professed to being a Red Devil and suggested he could even play for the club after he hung up his running spikes.

Bolt never did Bolt pull on the ­famous red shirt, though he did get a trial for Australian A-League side Central Coast Mariners. However, he did get to captain his own celebrity pro-am side at Old Trafford for the Soccer Aid charity in aid of UNICEF in 2018. His Rest of the World side lost to England in a penaly shootout after a 3-3 draw but, Bolt wearing a shirt with 9.67 on his back (after his world record), fulfilled a dream of scoring at Old Trafford.

Rory McIlroy and Floyd Mayweather are two other champions from the world of sports who are said to be ­United fans, as are Hollywood stars Megan Fox, Steve Coogan and Justin Timberlake. Other musicians include British chart topper Stormzy and Radiohead's Thom Yorke, although the most famous person reported to be a fan of the club is North Korean leader Kim Jong-un, though that is yet to be proved.

From one United to another, the Sheffield variety's biggest fan is superstar actor Sean Bean. Perhaps most famous for his role as Ned Stark in Game of Thrones, Bean's finest work was as striker Jimmy Muir in When Saturday Comes where he journeyed from pub football to playing for the Blades and knocking Manchester United out of the cup.

Local lad Bean and Sheffield Olympian Jessica Ennis-Hill makes more sense than the Red Hot Chilli Peppers bassist Flea, who is also said to be a fan. But that is fandom in a nutshell, it does not always make sense.

That is why Watford fans include hometown hero boxer Anthony Joshua, global megastar (and former chairman) Elton John and Jennifer Aniston. The latter's ties extend to BBC Radio One DJ Chris Stark giving her a club shirt during an interview - a tactic he also tried on Mila Kunis and Robert Downey Jr. Perhaps the biggest fan is Miles Jacobson, who heads up the Football Manager game.

Wolves got a fan from a galaxy far, far away in 2017 when Mark Hamill was welcomed to the pack on Twitter - after accidentally liking a tweet, no less. "I only became an accidental 'fan' when someone asked if I liked the wolves and I said yes because I thought they meant the animal," he said afterward.

Just a short drive from Molineux at Villa Park, they count Tom Hanks as a Villan, along with Prince William and former British prime minister David Cameron (though Cameron did come unstuck whether it was the claret and blue of West Ham or Villa he preferred).

Liverpool can claim to have even bigger fans. Nelson Mandela, Dr Dre, Angelina Jolie and Lana Del Rey are among them but LeBron James likes them so much he is a part owner in the club. That is maybe not quite as cool as James Bond being a fan, which he is in the form of current Bond Daniel Craig.

Then again Timothy Dalton is said to be a Manchester City fan and Roger Moore was pictured on the Old Trafford pitch in a Manchester United shirt, so it might depend on who you think is the best Bond.

Just as in the Bond film Diamonds Are Forever, so are football club allegiances, for celebrities and the rest of us alike.