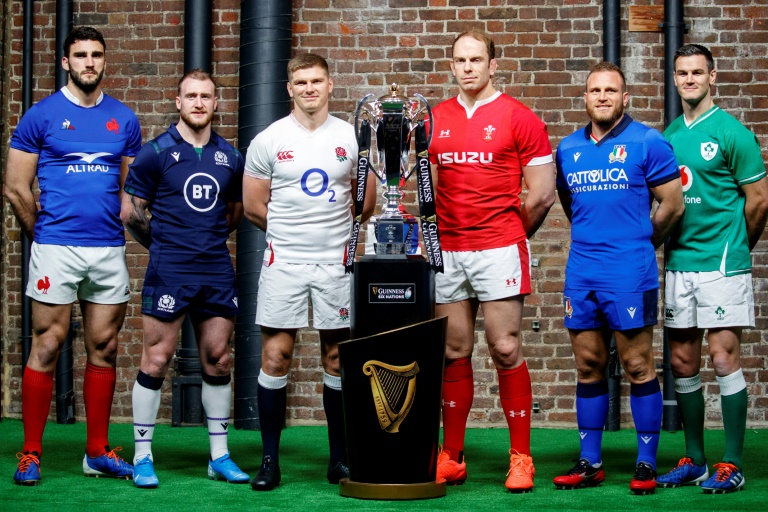 Some of them are new and some have been there before, but as the Six Nations gets underway coaches are going to be asking a lot from their captains and teams. (Photo: AFP)

The 2020 Six Nations Championship starts on Saturday with four of the teams under new management following last year's World Cup in Japan.

Below AFP Sport looks at the key tasks facing all six head coaches:

Jones, who turns 60 on Thursday, will hope England's disappointment at losing the World Cup final to South Africa helps provide the fuel for their first Six Nations title in three years amid the ongoing furore over the salary-cap scandal engulfing disgraced Premiership champions Saracens.

The former Japan coach's current Red Rose contract expires next year and this tournament could yet influence whether Jones, in charge of his native Australia when they lost the 2003 World Cup final to England, is still at the helm come to the 2023 edition in France.

Jones quote: "My aim is to make England the greatest rugby team the world has ever seen."

Townsend must rally his side after a lacklustre first-round exit at the World Cup that included defeats by Ireland and Japan.

An already tough task that sees the Scots starting the Championship away to Ireland -- their last win in Dublin was 10 years ago -- has not been made easier by Townsend's decision to drop Finn Russell for the match after the star fly-half failed to show up for training following a late-night drinking session.

Townsend quote: "We've got to be better, we know that that's a key focus for us, starting with an away game this year."

Can the man who was deputy to Joe Schmidt revive an Ireland side still hurting from the pain of a World Cup that ended with a quarter-final thrashing by New Zealand following a shock pool loss to Japan?

That's the issue facing former dual-code international Farrell, whose son Owen is England's captain, in what is his first senior head coach position.

Farrell quote: "We've got a hell of a team going into Scotland."

Most new coaches inherit struggling sides but the former policeman has taken over the reigning Grand Slam champions from Warren Gatland after his fellow New Zealander stood down following the World Cup.

Now the former Scarlets boss must decide how much and how quickly to change a Wales style of play that, while successful in Europe, could not see them past South Africa in a World Cup semi-final.

Pivac quote: "I am very excited. The whole coaching group is, to be honest."

Following a World Cup where France was arguably one red card away from reaching the semi-finals before Sebastien Vahaamahina's moment of madness cost them dear against Wales, Galthie finds himself in charge of a youthful and talented side after succeeding Jacques Brunel.

A tough opener at home to England will be a good test for Les Bleus, whose backroom staff also now includes Shaun Edwards, the former Wales defence coach.

Galthie quote: "We have a four-year vision and we have a shorter-term vision."

Any victory will do for new Italy interim coach Smith, with the Azzurri not having enjoyed a Championship success since a 22-19 win away to Scotland five years ago.

Former Treviso coach Smith begins his Italy reign with a daunting trip away to title-holders Wales.

Smith quote: "We want to find our DNA and play to our strengths."