With the 2020 Tokyo Olympic Games postponed by a year, big challenges await athletes who have been looking forward to bringing their best performance this summer.

On Friday, the International Olympic Committee decided, after discussing with the 33 international sports federations, to honor all previous qualifications when the Games finally take place. This means that for athletes who already qualified for Tokyo, they don't have to go back and compete for their spot again.

Despite the good news, many need to realize that securing a spot at the Olympics is far than enough for many athletes who prepare themselves for years to grab the opportunity. They are looking to make a breakthrough in their career or even make history in the sports arena. For them, a postponement of the Games means the need to readjust and find back their best shape by the time the Games are held.

This is not an easy task, especially in sports in which the performance of an athlete is highly dependent on their current competing level. Their previous achievements demonstrate their abilities, but it is the current form during the Olympic period that matters.

It is highly unpredictable on the track and field especially for athletes with very close competing levels. For them, whoever has a better condition on the day of the competition might triumph. And to work for that shape, they would have to plan ahead a long time before and take all necessary steps — training abroad, self-isolation, adjustment, and diet, among others. All those efforts are to make sure they are at their best at the Olympics. So, it's hard to imagine how disappointed they are over the news of the Olympics postponement.

On March 16 this year, China's shot putter Gong Lijiao scored a mark of 19.70 meters at an event closed to spectators in Beijing, which was the season's best worldwide. 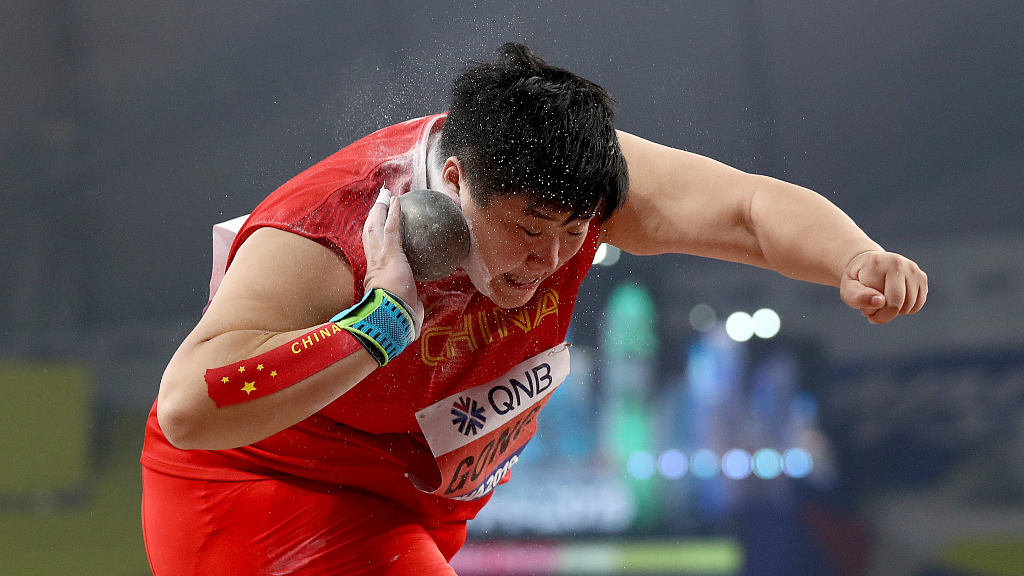 Gong Lijiao of China competes in the women's shot put final at the 2019 world athletics championships in Doha, Qatar, October 3, 2019.

During the 2019-2020 season, Gong claimed 12 gold medals and 1 silver medal out of her supreme shape. The Beijing Olympic bronze medalist and the London Olympic silver medalist has mentioned many times her ambition to nab an Olympic gold in her fruitful career. However, the postponement of the Tokyo Games poses as an obstacle to her dream, meaning her hard work and preparations this season might be for nothing.

Apart from keeping the competing conditions at a high level, aging might pose another challenge for other members of the Chinese athletics national team, especially for older athletes.

China's race walk champion Liu Hong took a leave to give birth to her first child after winning the Rio Olympics in 2016. She made an amazing comeback in 2019, setting a world record and winning gold at the 2019 IAAF World Athletics Championships in Doha. 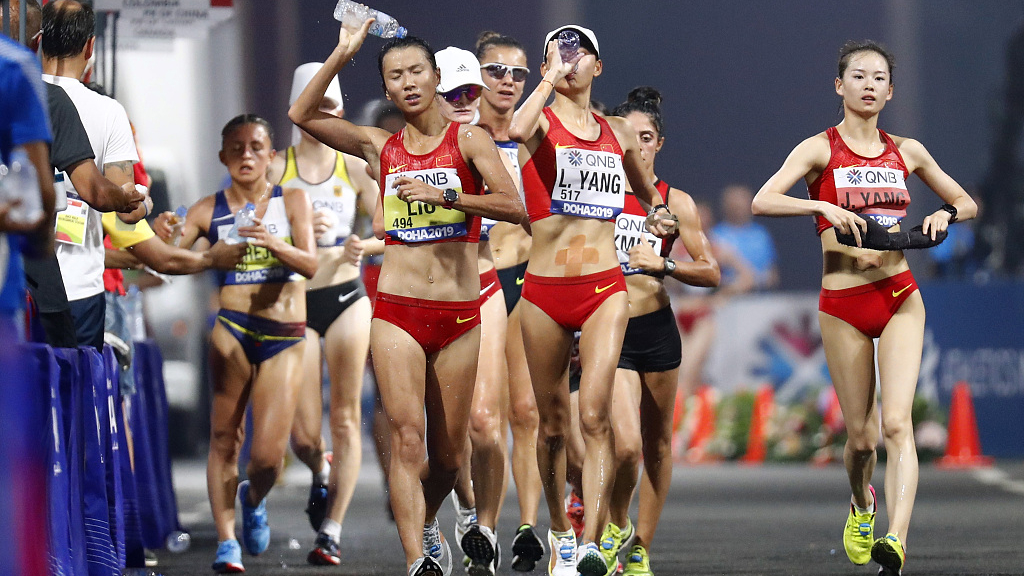 "It was going smooth during my training and competitions, and I was preparing to fight in Tokyo after self-isolation and adjustment," she said after learning about the postponement.

She will be 34 years old next year. Even though race walkers tend to have longer careers, one extra year could pose new challenges for her Olympic build-up.

One-year delay might be a good news for those struggling with injuries and looking to find their form back.

China's star high jumper Zhang Guowei made a 2.28-meter at an indoor competition in Italy on March 2. It was his personal indoor best as he was struggling with a series of injuries following the Rio Olympic Games.

Even though the 2.28m is still five centimeters short of the entry threshold for the 2020 Tokyo Olympics, Zhang believes it is a good start for his comeback. "I think 2.28-meter is just a start. I think I will definitely be better," he said after the event. 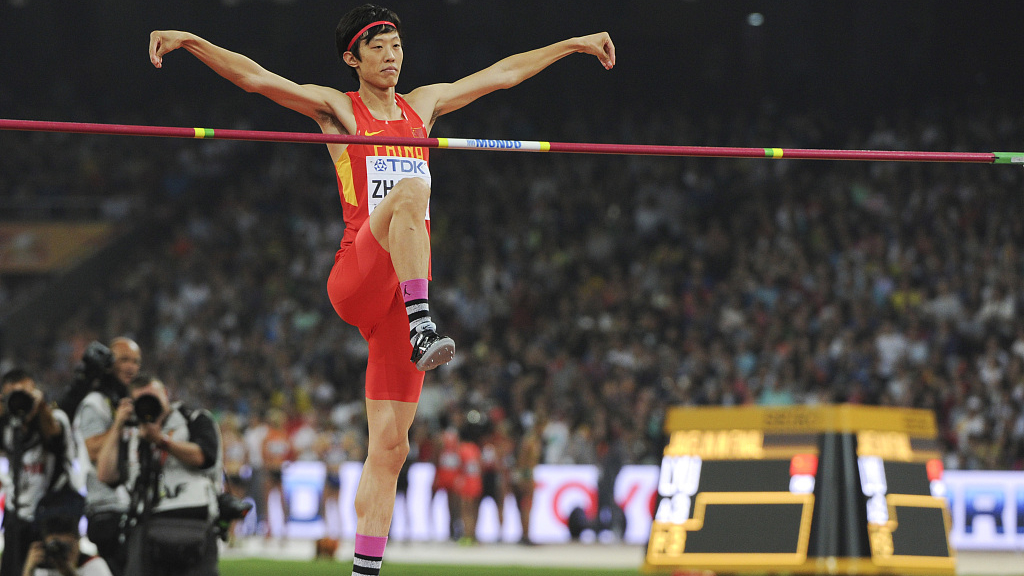 The world silver medalist with a personal best of 2.38 meters might have a good shot of qualifying for the Tokyo Olympics with the postponement as he could use the time to recover and find his form back.

The similar opportunities also await Chinese star sprinter Xie Zhenye. The 26-year-old had a stellar 2019-2020 season. He first broke the Asian record for men's 200 meters as he won the title in 19.88 seconds at the IAAF Diamond League in London in July. He then fought into historical 200-meter final at Doha world championships in October.

However, he had an injury when competing in the 4x100m relay in Doha which took him time to recover following the world championship. Xie had set his sight on the 2020 Tokyo Olympics after he finished seventh in the men's 200m final in Doha. With more time to build up, he is expected to fully recover by the time of next year's Games, with hope to make a big shot at the 100m and 200m events. 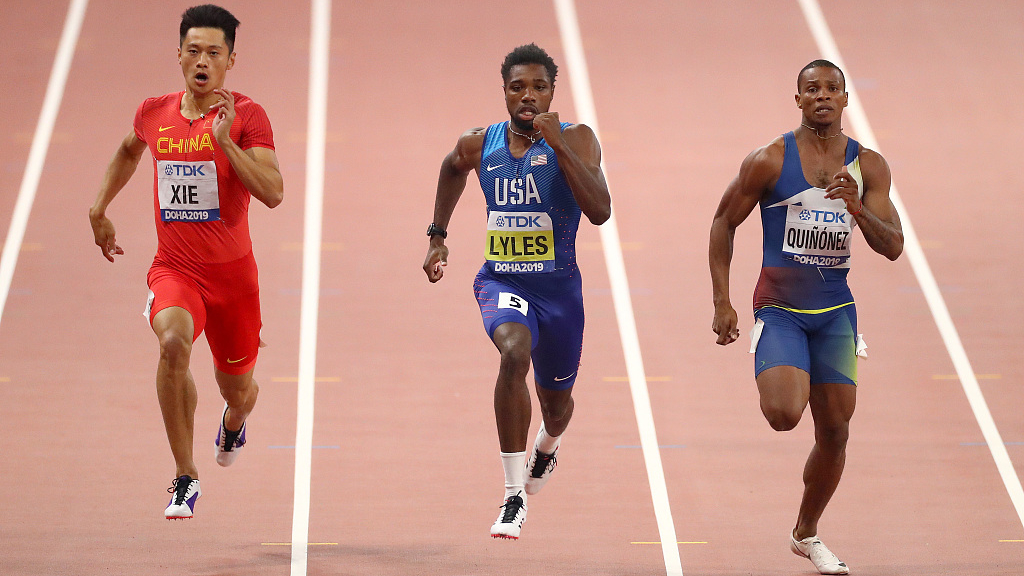 (From right to left) Chinese Xie Zhenye, Noah Lyles of the United States and Alex Quinonez of Ecuador compete in the men's 200 meters semi-finals during the 2019 Doha World Athletics Championships in Doha, Qatar, September 30, 2019.

The exact date of the rescheduled Tokyo Olympics is yet to be decided. On Friday, Sebastian Coe, president of the International Association of Athletics Federations urged IOC to make the decision on the date as quickly as possible.

Despite the unpredictability on the track and field, hard work and talent do pay off.