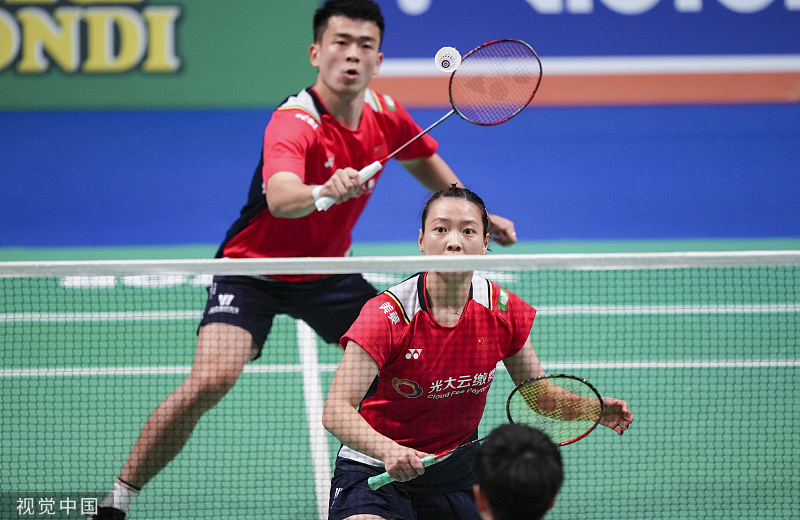 China participated in four of the five finals, with two of those being all-Chinese affairs.

China won their first title in the mixed doubles final, which was also the first all-Chinese match. The world No. 2 pair of Zheng Siwei and Huang Yaqiong defeated world No.1 Feng Yanzhe and Huang Dongping 21-19, 20-22, 21-19.

The first set saw Zheng and Huang having to withstand a barrage of incessant pressure from Feng and Huang, but still managing to win 21-19. However, a determined comeback saw the world No. 1 pair cling on and overturn their opponents' advantage, eventually winning the set 22-20.

Feng and Huang began the deciding final set with a firm grip on the play, but were to squander their built-up points advantage. Zheng and Huang advanced to victory, winning the 68-minute contest 21-19.

The women's doubles final followed, with China's Chen Qingchen and Jia Yifan, ranked second in the world, taking on the South Korean pair of Baek Ha-na and Lee So-hee. The Chinese pair won 21-12, 21-15 in 40 minutes.

The closeness of Ina and Ardianto's first set 21-19 victory revealed a very competitive and entertaining confrontation. In the end, it was Ina and Ardianto, who came from behind to win the second set 28-26.

Shi won the first set 21-18 despite some early setbacks.

The second set was filled with long, exhausting rallies in which both players pushed each other to the limit. Lee's strategy paid dividends, as he won the set 21-16.

With all things level going into the third set, the younger Shi unleashed a burst of reserve energy to take the early lead and held his nerves to win 21-12.

The Denmark Open has been part of the international badminton scene since 1936 and is the world's second-oldest badminton tournament.