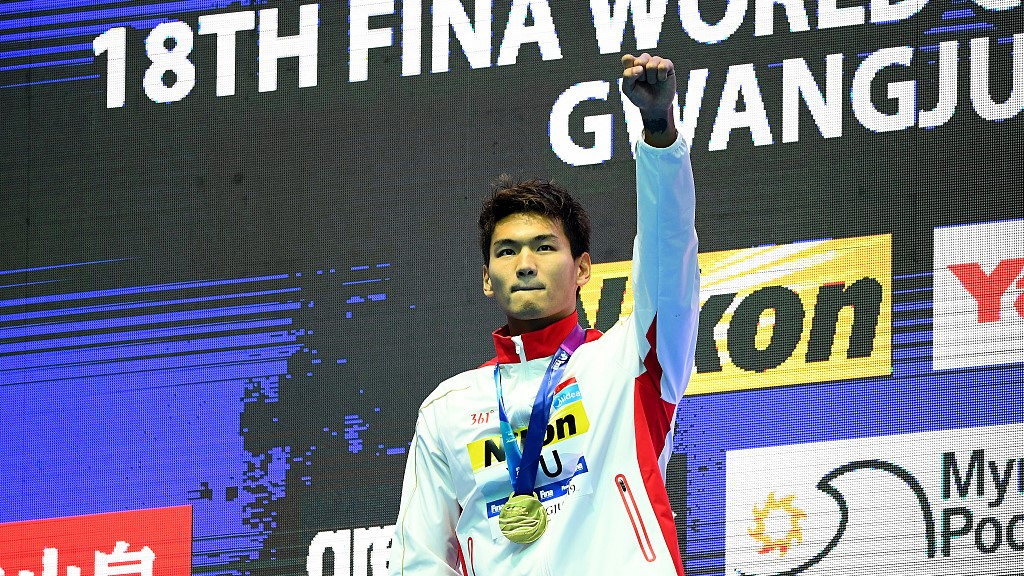 SHENZHEN, China, Jan. 14 (Xinhua) -- With the support from the full-house local audience, Xu Jiayu and Wang Shun led other Chinese swimmers to snatch five gold medals on the first day of inaugural leg of the 2020 FINA Champions Swim Series here on Tuesday.

Xu Jiayu, two-time world champion in men's 100m backstroke, proved his reputation by winning in 53.01 seconds while Wang Shun enjoyed an one-man show in the men's 200m individual medley with a winning mark of 1:57.76.

"The result is acceptable and it is a test of my current training form. I have the home advantages as the foreign swimmers compete right after long journey. In the next leg in Beijing, the competition will be much closer," Xu said.

"I am happy with my result and also happy for my teammate Yu Jingyao. She is a breaststroker and improves steadily recently. I hope both of us can go to the Olympic Games," Ye Shiwen said.

In a showdown between three-time Olympic champion Sun Yang and Lithuania's Danas Rapsys in the men's 200m freestyle, Sun led most of the race but was beaten at the wall by 0.03. Rapsys won in 1:46.50.

"200m race is rather short distance for me since I am not a good sprinter, but I can see my improvement in the start and turns. I am trying to find the competition form because it is the first race I have after the FINA World Championships finished last July," Sun said.

Vladimir Morozov, winner of the 2019 FINA Swimming World Cup, gave Russia the sole gold on Tuesday as he won the men's 50m free in 21.70. Siobhan Haughey from Hong Kong, China took the women's 100m free in 53.47. Arno Kamminga of the Netherlands denied local star Yan Zibei in the men's 100m breaststroke at 58.61.

The FINA Champions Swim Series includes a two-day schedule for each leg, with 14 individual and one relay race per session.

Following on the successful formula in 2019, no heats were held, with the four invited swimmers directly contesting their respective finals. An eye-catching entertainment program, with music and a light show, will also be performed during each of the sessions. The total prize money up for grabs is over US$ 1.2 million per leg.

The second leg of the FINA Champions Swim Series will take place in Beijing from January 18-19.