The Chinese international came off the bench and struck in the 88th minute to salvage a 2-2 home draw for La Liga's bottom club in Saturday's derby clash.

The goal was a huge talking point on Chinese social media and a trending topic on the Twitter-like Weibo, with one hashtag relating to it generating 370 million views. 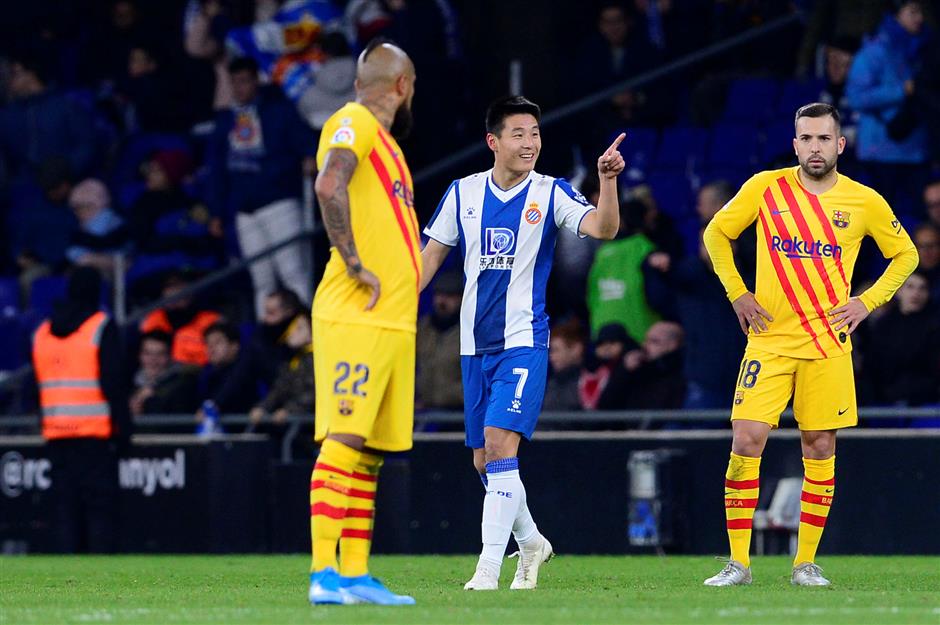 Espanyol forward Wu Lei (center) reacts after scoring his team's second goal — the equalizer — against Barcelona during their Spanish league match at the RCDE Stadium in Barcelona on Sunday. (Photo: SHINE)

"Wu has now become the first Chinese player to score against Barcelona in all competitions ever," state-run China Global Television Network said.

"A new chapter in history has been opened," it added.

"For Wu, it was a night that will live long in the memory."

It was his fifth league goal for Chinese-owned Espanyol since he moved to the club from Shanghai SIPG a year ago.

Xinhua said that Wu's dramatic leveller from a narrow angle "sparked a wave of praise from media and fans in China."

Wu joined in the celebrations by writing on Weibo: "Wonderful night, a new year, a good start."

China's new coach Li Tie will be relying on the forward to help rescue the country's hopes of reaching the 2022 World Cup in Qatar.

"He is currently the only Chinese player in one of the five major football leagues," said the former Everton midfielder in his first press conference in charge on Sunday.

"I watched the game last night and this (goal) is really something that brings honor to Chinese football."

Wu's late striker stymied a superb performance by Luis Suarez on Saturday to leave 10-man Barcelona tied on points atop the Spanish league with Real Madrid at the halfway stage of the season.

The China forward's equalizer came after Suarez had put the visitors on course for a win. The hosts were helped when Barcelona midfielder Frenkie de Jong was sent off for a second yellow card with 15 minutes remaining.

"The hardest thing to do is to turn a game around when playing on the road," Suarez said. "We let these points slip away."

The draw tightened the title race after 19 of 38 rounds. Barcelona is ahead of second-place Real on goal difference following a 3-0 win by Zinedine Zidane's side at Getafe.

Atletico Madrid moved into third place after Jan Oblak's great goalkeeping ensured a 2-1 win over Levante. Atletico is ahead of Sevilla, which drew on Friday, on goal difference.

Suarez canceled out David Lopez's first-half goal by scoring in the 50th with a precise touch of the tip of his right boot to steer Jordi Alba's lobbed pass inside the near post.

Suarez's assist for substitute Arturo Vidal to give Barcelona the lead nine minutes later was just as impressive. Suarez first dribbled around a defender before using the outside of his right boot to flip a pass across the box for Vidal to head home.

Barcelona was heading for a comeback win until Wu broke free down the right side of the area to receive a pass from Matías Vargas and drove an angled shot past goalkeeper Neto.

The gutsy performance by Espanyol came in the debut of coach Espanyol coach Abelardo Fernandez, a former Barcelona defender, who became the club's third coach of the season last week during the league's winter break.

"If we compete like this, we will be hard to beat," Abelardo said.