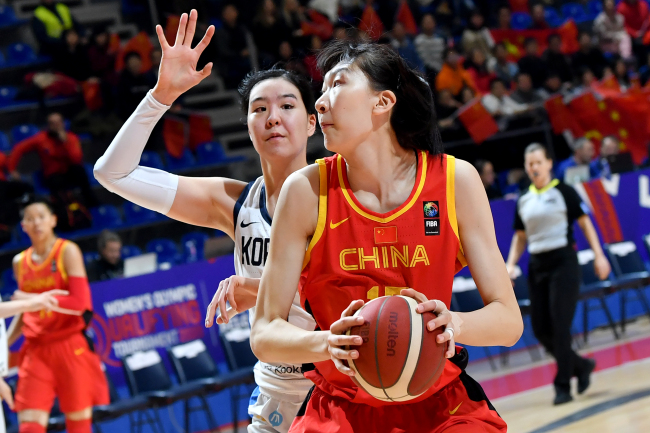 After an initial South Korean lead of 10-7, China easily turned the score around thanks to rebounds, fast counterattacks and defensive pressure.

Huang Sijing and Li Meng broke the initial scoring standstill, while Han Xu's play under hoops enabled China to get a six-point lead in the first quarter.

China's aggressive play proved unsolvable for the South Korean team in the second quarter, while Han Xu kept pouring down two-pointers for China's 23-point advantage at the halftime.

Li Meng scored two three-pointers and a field goal for an eight-point consecutive series at the beginning of the third quarter to increase the gap to 29 points at 57-28.

With 25 points in front at the start of the final quarter, China easily kept piling up points with strong attacks and flawless defense, earning a 40-point gap at 90-50.

Li Meng scored 20 points for China, followed by Han Xu with 16 points and Huang Sijing with 15 points and six assists. Kang A-Jeong was best in South Korean ranks with 17 points.

China had already won the ticket to Tokyo 2020 by beating Spain and Britain prior to this game.

The tournament was moved from Foshan of China to Belgrade, Serbia due to the coronavirus epidemic.

For the Tokyo Olympic Games, 16 women's teams have been divided into four groups with the top three qualifying from each group after a round-robin competition.