China's riders rising to the challenge 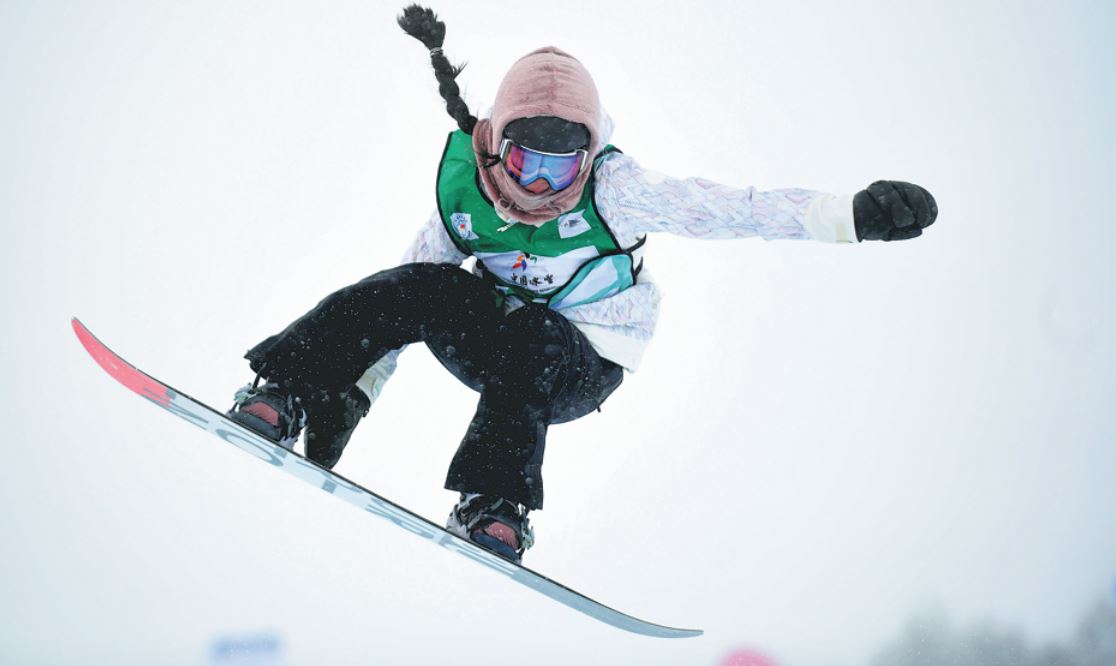 A Chinese one-two-and a sense that it should have been all three-at last weekend's home World Cup meet have pumped up the nation's snowboard halfpipe team to go the extra mile at the 2022 Olympics.

Liu Jiayu and Cai Xuetong thrilled the hardy home fans who braved the freezing wind at Genting Resort Secret Garden in Zhangjiakou, Hebei province, on Sunday by bagging gold and silver respectively in the women's competition at the 2022 venue.

Team China's head coach Pekka Koskela, however, wasn't quite in the mood to celebrate due to the perceived injustice of Wu Shaotong's fourth-place finish behind American prodigy Maddie Mastro.

"Today I am happy we got the first and second, but also frustrated because we should've had the third place too," Koskela told China Daily before approaching the judges for an explanation.

"Wu should've had her first podium here. She was riding amazingly well, making us even more excited than winning the gold and silver."

The dissatisfaction of the Finnish coach, who has been working with the Chinese squad for five and a half years, reflected the high hopes for the team in halfpipe-one of the very few snow disciplines that China excels in.

Liu, who finished runner-up behind American Chloe Kim at the Pyeongchang Games last year to earn China its first Olympic snowboard medal, cemented her position as the team's leading rider on Sunday.

After taking a year off last season, Liu has shown no rust in her comeback after becoming the first woman on this year's Cup tour to 'break nine' (a term for exceptionally well-executed routines scoring 90-plus points).

That second run earned her 90.8 points for a combination of stunning tricks, including as the Haakonflip 720 mute (an inverted 720-degree rotation) and frontside 720 stalefish (two full rotations with her back hand grabbing the board).

Following her second-place finish at the season opener in Copper Mountain, Colorado, Liu now tops the overall Cup standings ahead of Spain's Queralt Castellet, who failed to qualify for the Genting finals.

"I'm feeling pretty stoked. It's always awesome and a proud feeling to win on home soil at a resort I consider my backyard," said Liu, who is an ambassador for Secret Garden.

"The journey to 2022 has just started. I will take it one step at a time to try to peak at the Olympics. I hope to surprise the home fans when the time comes."

After stepping back from competition last season, Liu said she's come back feeling refreshed and recharged, and on a mission to catch Kim in the buildup to 2022.

"I've had enough rest and will set out on my next goal fully concentrated. I am looking forward to all possibilities in the future," said the 27-year-old Liu.

Kim is the only female snowboarder to have won the world championships, the Youth Olympics, the Olympics and X Games with world-leading difficulty in tricks.

The 19-year-old California native of South Korean descent is taking a break this season to focus on her study at Princeton University.

"Jiayu is looking pretty good at the moment," he said. "We had a good training camp in the summer which has started to pay off."

"We want to get the gold and of course she wants to beat Chloe. With her staying off this year, I think it's a good chance for us to catch her by doing the things right."

Young rider Wu's fourth-place finish on Sunday, her best Cup result since joining the tour in 2016, served notice to the world that more elite Chinese riders are in the making.

"I feel so happy today, not for us winning medals but for the rise of a next-generation rider in Wu, who thoroughly deserved a podium spot today," said Cai, who bagged silver with a third run that scored 89.2 points.

"I am excited about the fact that we have a group of youngsters coming up strong following in our footsteps. They have worked extremely hard and it's time for them to announce their arrival big time," added Cai, 26, who finished atop the Cup's overall standings last season for a fifth time.

In the men's competition, Australia's Olympic bronze medalist Scotty James won gold with a thrilling third run that scored 97.8 points, after being pushed all the way by the Japanese duo of Yuto Totsuka (95.8) and Ruka Hirano (92.6).

Zhang Yiwei, the only Chinese man to qualify for the finals, retired hurt after crashing into the edge of the pipe on his second run.

Koskela later revealed that Zhang was not seriously injured and should be able to return to competition soon.