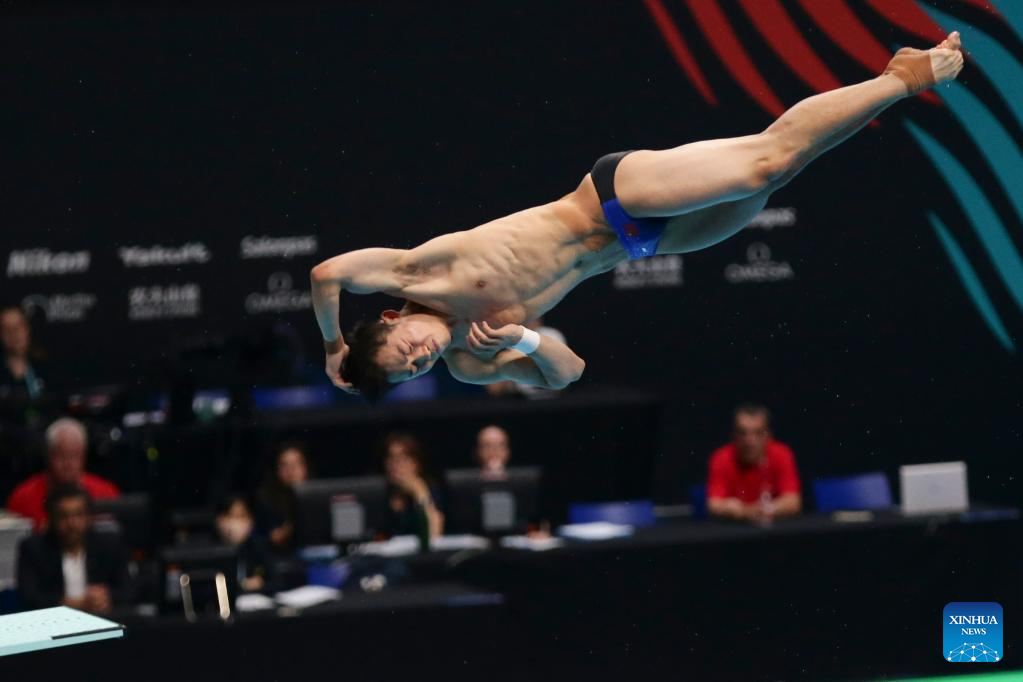 Later in the men's 10m synchronized, Yang Hao and Lian Junjie added another gold for the diving powerhouse.

Wang took the lead from the first dive and finished with 561.95 points to complete the double victories in both the singles and synchronized events of the men's 3m springboard.

"In the preliminary stage, I made some mistakes. But I adjusted well in the semifinal and final," Wang said. "The first two and the last dives in the final were pretty well, but for the other three, I think I could do better."

Wang competed in the event at Tokyo Olympics last year, where he sat behind another Chinese diver Xie Siyi to finish with the silver.

"During the competition, I only focused on my own dives. You shouldn't think about others' points or the changes in the ranks. All you have to do is to think about the technical things and dive one by one. This was what I did in the match," the 21-year-old added.

Cao, Wang's title-winning partner in the synchronized, ranked second with 492.85 to pocket his 13th medal at the worlds and Olympic Games combined - only Russian legend diver Dmitriy Sautin (17) has won more medals than him in these two tournaments.

The three-time Olympic gold medalist has clinched at least one medal in the recent three Olympic Games and five aquatic worlds.

"No matter whom I compete with, I tried to treat the event in the same way," said the 27-year-old veteran. "Today I think I could do better in the height of my jump, if so, maybe the points would be higher."

Tokyo Olympic bronze medalist Jack Laugher bounced back from his poor fourth dive to take the bronze with 473.30. The Briton slipped to the sixth place after collecting only 37.80 in the fourth round but clawed back to the podium with a 91.20 in his fifth and a 97.50 in the last dive.

China extended its dominance in the discipline by winning the title for a record nine times, including at each of the recent eight editions. The most recent non-Chinese athlete to win the title in this event was Alexandre Despatie of Canada in 2005.

In the platform final, top finishers Yang and Lian collected 467.79 points to secure China's fourth gold from as many events at worlds. British pair Matthew Lee and Noah Williams took the silver with 427.71, and Canada's Rylan Wiens/Nathan Zsombor-Murray completed the podium with 417.12.

"We have just teamed up for a short time, and in fact our performance today was not good enough for a premier event like worlds," said Yang Hao, who had won the gold in the same event five years ago in Budapest with another partner Chen Aisen, a two-time Olympic champion and three-time world title winner.

"Chinese team failed to secure the gold in this event at Tokyo Olympics, so we are happy that this time we won it back," the 24-year-old added.