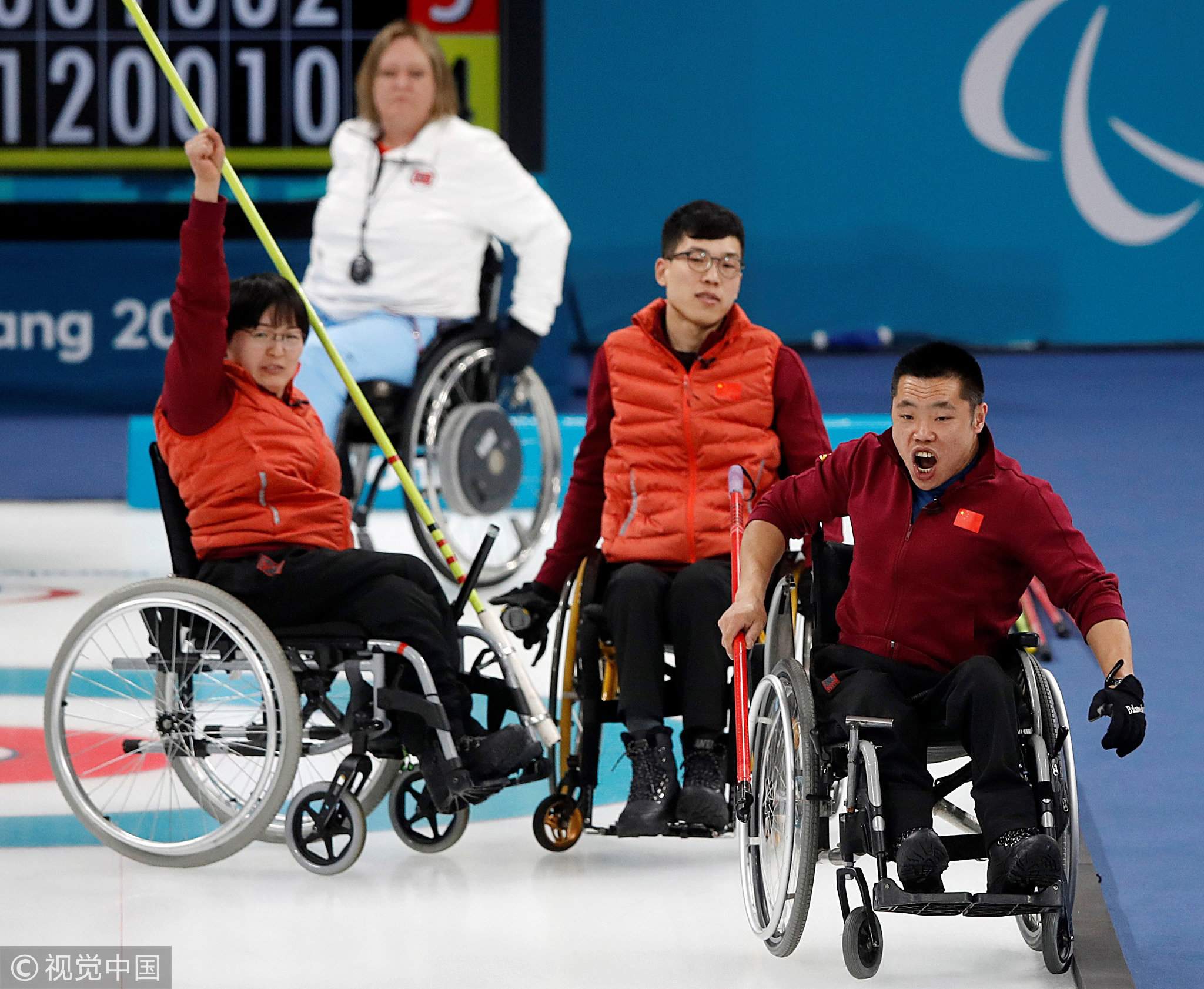 Chinese athletes during the wheelchair curling final at the 2018 PyeongChang Winter Paralympic Games in South Korea, on March 17, 2018. (Photo: VCG)

BEIJING, Dec. 29 (Xinhua) -- One month ago, when Wang Haitao, team leader of China's wheelchair curling team, came to the newly-built Beijing Winter Paralympic curling venue, the National Ice Sports Arena for People with Impairments, he was surprised to find it very accessible.

At the entrance, the door opens automatically without pushing, the corners of the wall surface are carefully arced to prevent bumps and bruises, and elevators, restrooms and toilets are equipped with handrails of equal height.

In Wang's view, China is making greater efforts to cater for disabled people, with the most direct method being the construction of more barrier-free facilities.

In the training hall, banners with red background and white characters hanging on the walls are particularly conspicuous.

One of them reads, "Pyeongchang has become history. Run to Beijing from scratch," indicating to the team that past achievements belong to the past and more effort is needed in the future.

In recent years, he has witnessed the leap of Chinese wheelchair curling from weak to strong, and of facilities and equipment from inadequate to extensive.

Wang remembered that more than a decade ago, wheelchair curling was still a "blank" in China, with their training sessions taking place in skating venues.

"At that time, we didn't have special venues and we lived on the fifth floor, and there was no elevator. The coach carried us up and down the stairs in our wheelchairs," Wang said.

Teammate Liu Wei recalls similar difficulties. "At that time, the Internet was not so popular. We didn't know how foreign players trained, so we explored our own training methods: tying bicycle tires with rubber bands as the head of the pole and practising against the grass."

Every day, every player needed to throw curling stones about a thousand times. If the pole was broken, Wang and his teammates couldn't bear to throw it. If the pole was cracked, they stuck it together with glue.

Suffering cold ice, long periods sitting uncomfortably, and heavy stones, many wheelchair curling athletes were plagued by physical disability and injuries, but they did not give up.

Their hard work finally paid off. In 2018, the Chinese wheelchair curling team made a historic breakthrough and won the first gold medal for China in the Winter Paralympics. 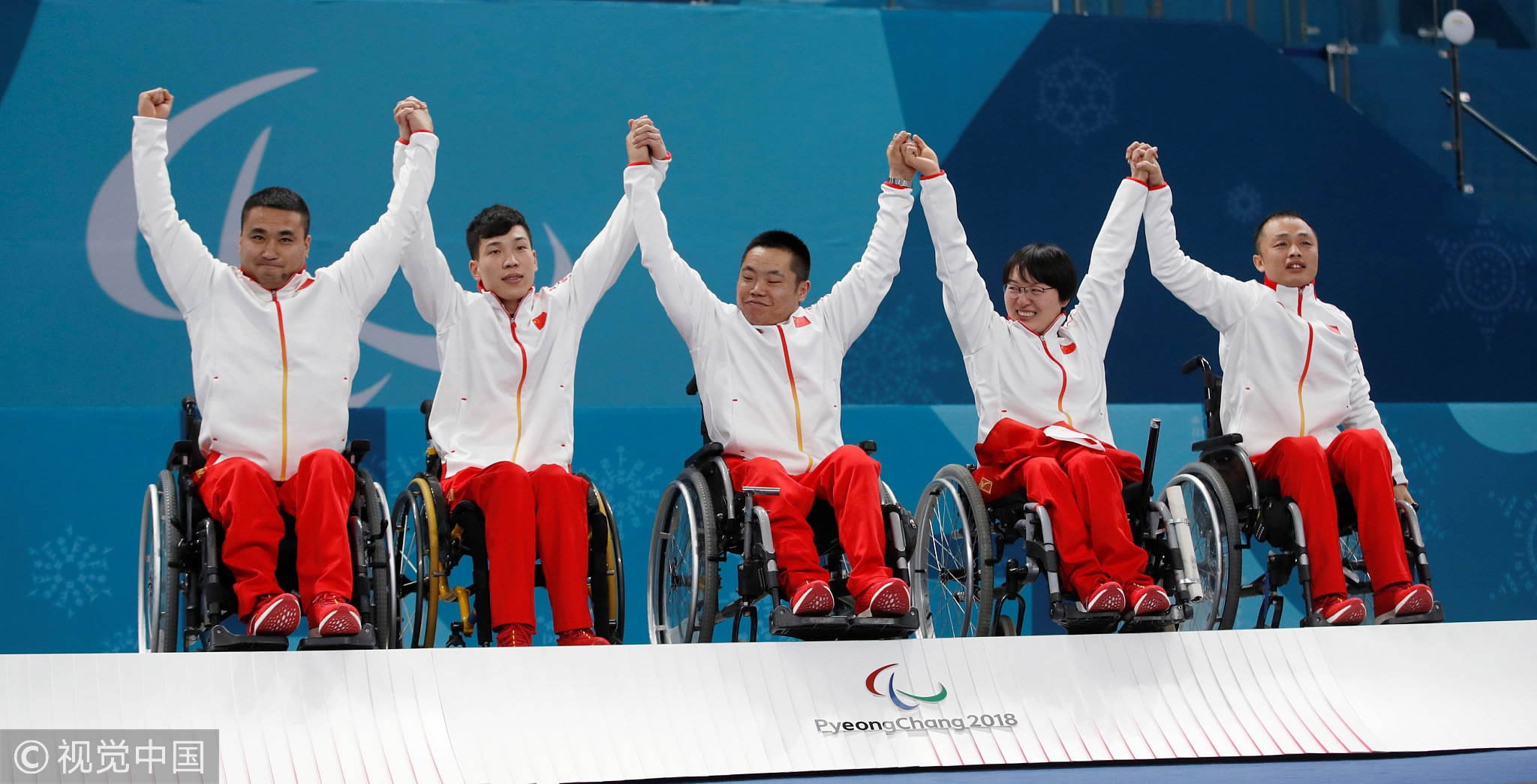 These successes gave the players fame and glory, but more importantly, increased their self-confidence.

One of the older members of the team, Zhang Qiang worked as a supermarket cashier and a net manager before taking up curling. "After mastering curling, my whole state has changed, and I do not feel as inferior as before."

In recent years, Zhang has not only gained achievements and honors from curling, but also used his spare time to finish college courses, achieve a doctor's certificate and learn the guitar.

As one of the few female players in the team, Wang Meng was a table tennis player before taking up wheelchair curling. "In eight years of playing table tennis, I didn't get ideal results. Later, I switched to curling and finally found a sport that suits me," Wang said.

Mental stability is also important in Yue's eyes. "This year's training is special. The closed environment and concern for family members will have an impact on the team members. Weekly psychological lectures will guide them and provide guarantee for their future response on the ice."

Now the Chinese wheelchair curling team has four coaches who hope to identify the characteristics of each athlete through closed training and combine them to create the best line-up.

Yue said, "The moment you come down from the podium, it is time to prepare for bigger things. Many countries have begun to analyze us. We are also studying strong teams from various countries. Our common wish is to live up to the hardships and efforts. In 2022, we will keep this gold medal at the 'home door'."

Zhang Mingliang, who was selected to the national team from the squad of Hebei Province, made a new year's wish: "I hope the pandemic will pass quickly and the world will return to normal. I'll throw every stone earnestly in 2021 and strive to win the gold medal on behalf of China in 2022."