BEIJING, March 28 (Xinhua) -- Chinese football star Wu Lei told media on Saturday that his wife has also tested positive for Covid-19, adding that he is confident the virus won't affect his career as all his symptoms have completely disappeared. 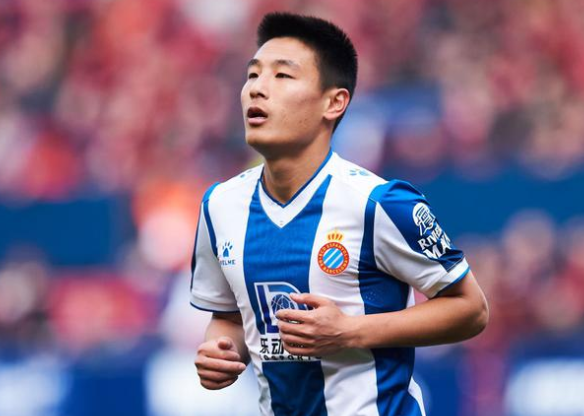 In an interview with Chinese central television, the Espanyol striker revealed that he had a fever and headache on March 15, and then tested positive for Covid-19 three days later. His wife subsequently showed symptoms and was also revealed to have contracted the virus. The couple are now in self-isolation at their home in Barcelona, having sent their two children to stay with their grandparents.
"I feel better and better every day and currently have no symptoms at all, and neither does my wife. I had a CT check on March 19, which showed very good results. Based on my own feelings, I don't think the virus will have any impact on my future career physically," said Wu, the only Chinese footballer playing in Europe's top five domestic leagues.
The 28-year-old also confirmed that he has not been tested again in consideration of the test kit shortage in Spain. "I think test kits should be used by those who have more severe symptoms. Right now, I'm just staying at home to rest my body, and will gradually start training in the coming days," he added.
As Covid-19 continues to ravage Spain, where over 65,000 cases were confirmed as of Friday, Wu said he and his club Espanyol, as well as many Chinese living in Spain, have been trying to ship medical supplies from China to help the European nation.
The Chinese Football Association confirmed last Sunday that Wu was the first Chinese professional footballer to contract Covid-19, which immediately became the top search on Chinese social network Weibo. Millions of fans have voiced their support for the much-loved Chinese international.
"Many of my friends, teammates, fans and national team head coach Li Tie sent me messages. I am sorry that I couldn't everyone all back. I am very thankful for their support," Wu said.