PARIS, Oct. 3 (Xinhua) -- China's Zhang Shuai ended an inspirational run of French teenager Clara Burel 7-6 (2), 7-5 on Saturday to secure her career debut in the French Open round of 16. 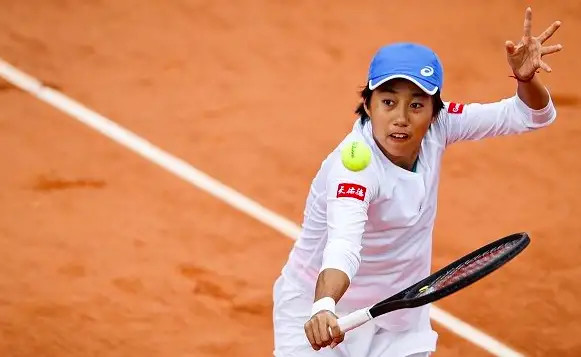 The 31-year-old, who is to face No. 7 seed Petra Kvitova in the next match, also became the first Chinese singles player since Li Na in 2012 to reach the fourth round at Roland-Garros.

"The match today I think we both play really well and a really great match. She played unbelievably good," said Zhang, who defeated Burel 6-3, 7-6(3) in the Strasbourg Open before coming to Paris.

"Despite only one week, she has improved a lot since we met last time. She is very young, but she has got everything on the court. Last time in Strasbourg, she didn't go into the game so quickly and played not so steadily. But this time, I can feel her confidence has boosted after winning two rounds at a Grand Slam," the former world No. 23 added.

The 19-year-old rising star wasted three set points when she took a 5-3 lead in the first set and stormed to 40-0 in the ninth game. But Zhang battled back and held the serve before breaking Burel's in the tenth to level the score at 5-5.

After both exchanged serves in the following two games, a more experienced Zhang then delivered a dominant performance in the tie-break to seal the first set.

"I think it was played out at a few points really. These are a few points that rocked the game. I did not know how to seize the opportunities that I had mainly in the first but also in the second set. This is what made the difference today," Burel commented on her performance in brief.

The second set was filled with breaks as both players failed to hold their serves from the sixth to the 11th game. Zhang served to win in the 10th game but was broken by her French opponent. However, when the chance appeared again on the 12th, Zhang didn't miss it and wrapped up the victory with a flawless love game.

Two-time Grand Slam winner Kvitova had to bounce back from 1-5 down in the opening set against Canada's teenager Leylah Fernandez to set round-of-16 clash with Zhang.

In men's competitions, top seed and world No.1 Novak Djokovic only dropped five games to cruise past lucky loser Daniel Elahi Galan of Colombia 6-0, 6-3, 6-2 to reach the last 16.

The win also improves the Serbian's season record to a stunning 34-1. The only defeat came in a disqualification earlier this month at the US Open, where he hit a ball in frustration which struck the line judge on the neck.

"If you impose yourself from the very beginning on the court, which I have in those first three matches here, then it makes it hard for them to really believe that they can come back and make a turnaround in the match," said the 2016 champion, who is seeking for an 18th Grand Slam title at Roland Garros.

Djokovic showed great sportsmanship in the match when rain fell down heavily on Galan's side of the court as the new Court Philippe-Chatrier roof was closing, the Colombian slipped over. Djokovic responded by calling a pause of the match until the conditions came back equal for both sides.

Next up for the 33-year-old is Russia's world No. 16 Karen Khachanov. Djokovic owns a 3-1 lead in the head-to-head record against Khachanov but the latter won the pair's previous encounter in Paris - at the 2018 Paris Masters when the Russian claimed a straight-set win in the final to clinch the biggest title of his career until now.

Also on Saturday, fifth-seeded Stefanos Tsitsipas earned a spot in the fourth round after his Slovenian opponent Aljaz Bedene retired from the match and hobbled off the court when trailed by 6-1, 6-2, 3-1.

The Greek star will compete for a quarterfinal place with No. 18 seed Grigor Dimitrov.