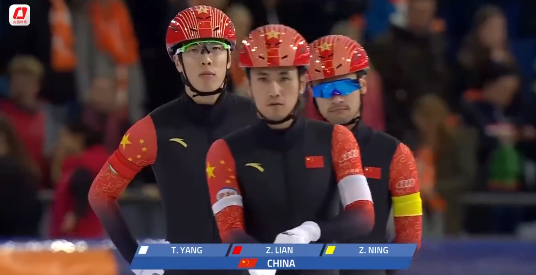 THE HAGUE, Nov. 20 (Xinhua) -- China took the men's team sprint gold as the second ISU Speed Skating World Cup of the 2022-2023 season concluded in Heerenveen, the Netherlands on Sunday.

China's team of Yang Tao, Lian Ziwen and Ning Zhongyan, finished in one minute and 19.55 seconds for the win, 0.27 seconds faster than the Dutch hosts. The United States bagged the bronze medal 0.08 seconds further behind.

Triple Olympic champion Irene Schouten, who took the 3,000m, 5,000m and mass start golds in Beijing, set a new track record of 3:54.04 to win the women's 3,000m in style. This was her second gold on home ice after winning the mass start on Friday.

Olympic bronze medalist Isabelle Weidemann of Canada came in second in 3:57.70, followed by Norway's Ragne Wiklund in 3:58.31. China's Youth Olympic champion Yang Binyu finished 15th in her Division A debut over the distance with a personal best time of 4:08.51.

In the men's 1,500m, Connor Howe beat Dutch Olympic champion Kjeld Nuis and silver medalist Thomas Krol for the gold medal. The 22-year-old Canadian, who finished fifth on his Olympic debut at Beijing 2022, crossed the line in 1:43.38, 0.26 seconds faster than Nuis and 0.45 ahead of Krol.

Earlier on Sunday, Kim Min-sun of South Korea won back-to-back women's 500m titles in 37.21 seconds, even faster than her winning time of 37.55 at the season's first World Cup in Stavanger, Norway. Vanessa Herzog of Austria (37.48) and Jutta Leerdam of the Netherlands (37.51) took silver and bronze medals respectively.

The third of the six World Cup events this season will be staged in Calgary, Canada from December 9 to 11.